Cary, N.C. — About 50,000 people are expected to hit the streets of downtown Cary for the town's annual Lazy Daze Arts & Crafts Festival.

The festival, which runs 9 a.m.-5 p.m., features about 385 vendors and visual and performing artists.

“Each year, Lazy Daze presents visual and performing arts of extraordinary caliber to a wide audience from the Triangle area and beyond,” festival coordinator Joy Ennis said in a release. “Explore the talents of vendors from across the country, and learn how to get involved with cultural arts and community programs here in your own backyard.”

This year's highlights include a grill-off between 10 chefs fixing steaks paired with a Beringer wine; an attempt to build the world's largest doll, at 20 feet tall; and the chance to buy a locker from the old Cary High and Elementary school, which is being renovated into a community arts center.

This year, the festival will feature the Beringer Vineyard’s Great Steak Challenge Regional Semifinals, in which 10 grillmasters will cook steak and pair it with a Beringer wine. The winner will travel to Napa Valley for the national championship, which will air on the Cooking Network.

Jason Lynch, owner of E.G. Bear Company in West Virginia, will try to create the world’s largest doll at more than 20 feet tall and set a Guinness Book world record. Festiva-goers can help stuff the doll.

Locker doors from Old Cary High and Elementary School will also be sold. The school is renovated to become a community arts center.

Proceeds go into a grant fund for local nonprofits arts organizations. Over 33 years, the program has distributed approximately $475,000 in grants.

The following streets will be closed, and residents will need a government-issued photo ID to access the areas by vehicle:

Free shuttles will run from the Sears store in Cary Towne Center, at Maynard Road and Walnut Street, to Cary Elementary School on Kildaire Farm Road. Shuttles run every 15 minutes from 8:30 a.m. to 5:30 p.m. 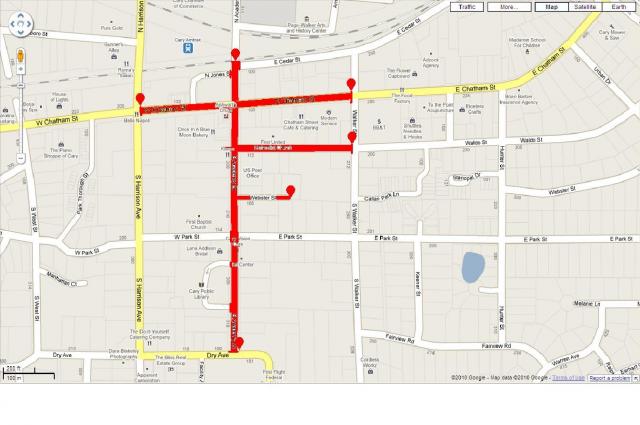