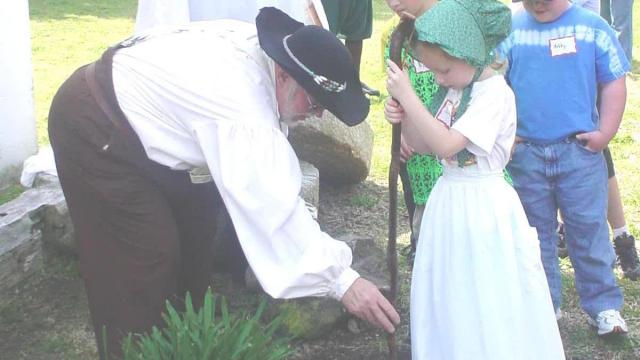 This history is still alive and well all over Carteret County, from the Old Burial Ground in Beaufort to Fort Macon in Atlantic Beach, and while many locals are familiar with the storied history of the Crystal Coast, those from elsewhere may be surprised by the stories that reside on, around and under the water's surface.

Local historian and storyteller Rodney Kemp has lived in Carteret County for decades and even fondly recalls attending Morehead City's hundred-year anniversary in 1957 when he was just 10 years old. Now, more than half-a-century later, Kemp is an expert in local history and regularly hosts seminars, but his particular passion lies in Morehead City's Promise Land.

"Over on the banks, there were settlements, particularly on what is now Shackleford Island. In the early 1870s, there came a series of hurricanes and storms that were more destructive than in normal situations, eroding pastureland and covering land with sea sand and creating inlets that weren't normally there. For those who lived there, they began thinking paradise was going to be lost — that's the term I use," Kemp said. "The interesting thing that makes it particularly important is settlers disassembled their humble houses on the banks, put them aboard sail skiffs and floated them over to the Promise Land and reassembled them."

"There was a famous doctor in Morehead City named Dr. Benjamin F Royal," Kemp continued. "He was watching as several of those sail skiffs came across the Sound with a house on each one of them, and he said, 'It looks to me like the Israelites carrying the tabernacle to the Promised Land,' and that caught on. They were relocating to a better place that the Lord had provided, in what is now downtown Morehead."

The Promise Land was so iconic, in fact, that former president Theodore Roosevelt would visit the area and stay in the neighborhood.

While Kemp isn't an original Promise Lander himself, he's been welcomed in and even started a preservation society called the Promise Land Society. He also writes books, does tours, and attends speaking engagements to shed some light on the history of the area.

The Promise Land is still around today, and many local residents can trace their lineage back to the original settlers of the area. Without these descendants, it would be nearly impossible for people like Kemp to detail the history of the area. With no written first-hand accounts kept, the story of the Promise Land has been preserved through generational storytelling, oral history and preservation of the historic homes and sites left behind.

Just up the coast in Beaufort, the history continues, and the storytelling tradition has transformed for a new generation.

"The Old Burying Ground is a very special place in our town. It is on the National Register of Historic Places, and many of the people buried there likely were born in the 1700s," said Patricia Suggs, the executive director of the Beaufort Historic Site. "We have an app that guides you through a walking path tour, with little markers inside the Old Burying Ground that tell the stories of those buried there. There's a huge history of the Civil War in there, because you'll find graves of freedmen and women, enslaved people, Confederate soldiers, and Union soldiers — which is unusual."

At the Beaufort Historic Site, Suggs and her colleagues maintain not only the Old Burying Ground, but also the six authentically restored buildings in the town's historic district.

The history of the buildings dates back to the 1700s as well, during the time of George Washington's presidency. According to Suggs, one of the oldest houses in town was supposedly visited by the infamous pirate Blackbeard, whose flagship the Queen Anne's Revenge, was found off Beaufort Inlet in 1996.

Of course, maintaining so many historic buildings is a tall order. Much of the work is done by volunteers who are passionate about preserving the history of the area. For example, the herb garden surrounding the old apothecary is maintained by the Master Gardeners of Carteret County, and many retirees spend their free time lending a hand with building upkeep.

This same passion for preservation helps keep the tradition of storytelling alive, as the well-maintained buildings serve as frequent stops for school field trips where students take a step back in time to learn skills like hearth cooking, gardening, and farm chores.

While the land on the coast boasts its own history, there's even more to be found under the surface of the water — including famous shipwrecks and artifacts of historic battles.

"One of the most famous wrecks is the German sub U352 that was depth charged off of the Cape and sunk by a Coast Guard cutter in World War II," Kemp said. "The survivors, who were German sailors, floated to the surface in shark-infested water, and the Coast Guard called headquarters in Charleston and said, 'We've got people, the enemy, floating in the water. Should we pick them up?' They said, 'No, don't pick them up. They're the enemy.'"

He added, "The local crew pestered headquarters staff long enough that they were able to rescue them and take them ashore for treatment. They were the first enemy soldiers held within the confines of the United States since the War of 1812, and for many years the diving society of Morehead City and those German survivors would come and have an annual celebration."

From sunken pirate ships to war submarines to floating neighborhoods, the history around the Crystal Coast is one-of-a-kind, giving the area an undeniable allure — one that history buffs like Kemp and Suggs hope to keep alive.

"In the 1970s, Beaufort was in the middle of a huge urban renewal project and the State of North Carolina hired someone to survey Beaufort's historical and architectural assets," Suggs said. "He wrote in 1970 that 'While there are other coastal towns, there is no other Beaufort. Beaufort's lure is the existing town with its collection of historic structures and quaint, quiet, tree-lined streets. The difficult part of developing its potential is the necessity of ensuring that the lure of existing Beaufort does not disappear while tourism trade is being developed. It is here that people must be particularly vigilant.'"

Suggs concluded, "We've still been able to retain that charm; change is occurring rapidly in this area, but I am confident it will be for the good."