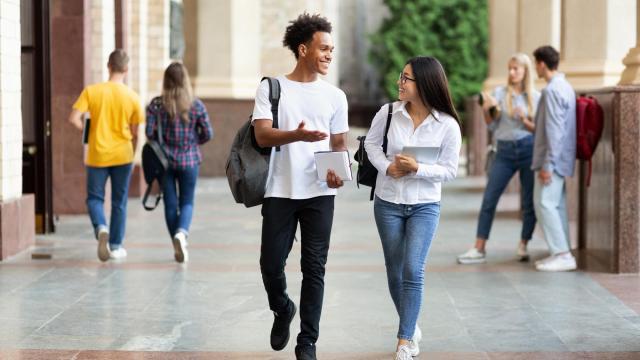 In 2016, roughly 5.8 million students across the United States were enrolled in a two-year post-secondary institution. For many, community college is an avenue of higher education that is more affordable and less time consuming than a traditional four-year institution. For others, it is a direct pathway to employment or a stepping stone to further education.

For students at Carteret Community College, it is a place that prepares them for both life and career amidst the beautiful backdrop of the Crystal Coast.

"We are an open door institution, meaning we accept everyone — we have a very diverse student body that mirrors our diverse program offerings. There's something for everyone here," said John Hauser, president of Carteret Community College. "Whether you're a traditional student who has just graduated high school, or if you're an adult learner, there are options."

CCC offers 81 programs of study — 39 degrees, 11 diploma and 31 certificate programs in subjects ranging from the arts or business administration, to engineering and hospitality management. Additionally, CCC's unique location along the coast and its access to the marine environment means it's able to offer areas of study like aquaculture technology and boat manufacturing that you can't learn just anywhere.

"Our aquaculture program is the only saltwater program in the state of North Carolina. It's focused on growing shellfish and seafood consumables so that these students can go on to open a small business or work for a farm or hatchery," Hauser said. "Our boat manufacturing program can be completed in a semester or a year, depending on a student's schedule. Graduates of this program can go to work for local yacht builders like Jarrett Bay Boatworks or the Coast Guard."

"The area is also the perfect setting for someone who wants to get into the culinary or hospitality industry because of the large and growing tourism industry in Carteret County," Hauser continued. "We have several outstanding restaurants here that have emerged out of our programs."

CCC offers a culinary internship for a select group of students each year. Students spend five weeks in France learning under the tutelage of French chefs and return home with a Disciples Escoffier International certificate.

CCC prioritizes working with area employers to identify their workforce needs and to create programs to help students move directly into employment when they complete their degree, certification or customized training.

In addition to its areas of study and industry-specific training, CCC offers training and education through its small business center, including a Small Business Academy entrepreneurship program. The affordable course helps budding entrepreneurs and business owners create a business plan, market their business, learn about bookkeeping and more.

Community colleges are often unfairly stereotyped as not being "as good as" four-year universities, but CCC proves these types of educational institutions have much to offer to students and employers alike. In fact, Hauser himself is a product of a community college education.

Hauser attended community college before transferring to the University of North Carolina at Charlotte, where he earned his bachelor's degree in engineering technology. He went on to complete a master's degree and later finished a doctorate program.

"When I first went to community college, I never thought I would be where I am now, but it's certainly possible," Hauser said.

CCC gives people of all types, including adult learners, an opportunity to thrive.

East Carteret High School graduate Victoria Washington headed off to a four-year university right after graduation, but her circumstances changed when she got pregnant with her daughter. She moved back home to Carteret County and began working at a data center.

Having had an interest in computers and technology since she was a child, Washington enrolled at CCC to study information technology, which gave her the flexibility she needed to focus on her school work and her family.

Washington said she loves the "family feel" of the staff and student body at CCC. Their support is one of the reasons why she blew everyone away at the SkillsUSA competition and walked away a national champion.

"I competed against students from 17 other states and did an IT field demonstration. I changed out a hard drive and updated it with a solid state drive in seven minutes in front of a panel of judges," Washington explained. "I had to demonstrate it in a way where an average person who doesn't understand computers could actually do the same thing on their own. If it wasn't for the staff at CCC, I wouldn't have made it to nationals."

Washington said everyone cheered her on as she prepared for the competition, and took time to watch her practice demos and give her constructive feedback that helped her win. After CCC, she hopes to continue her education at East Carolina University and get a job in the IT field.

If a bachelor's degree is what you're seeking, CCC is a great option for students like Washington looking to transfer into a traditional, four-year college setting, due to the cost savings and educational environment that CCC provides. CCC has college transfer programs that enable a student to complete their freshman and sophomore years at CCC and then transfer as a junior to a select four-year institution.

"We have applied science programs like horticulture and agriculture, culinary and information technology — a student will get an associate degree at CCC. However, they can transfer to a university in that technical curriculum and get an advanced degree," Hauser explained.

CCC has agreements with several schools in the UNC System, including UNC-Chapel Hill, through its Carolina Student Transfer Excellence Program. Students attend CCC for two years and then are guaranteed admission into UNC their junior year.

"We have 12 to 14 students in the C-STEP program right now. The most important thing for transfer students to know is that they're going to be successful," said Hauser, who mentioned that community college transfers have higher rates of success than traditional students heading straight into a four-year institution.

Carteret County native Janina Millis's dream was always to become a Tar Heel, and C-STEP helped her get there.

"Leaving high school, I had no idea what I wanted to study, but I did know that I wanted to continue to go to school," said Millis, a first-generation college student. Additionally, financial constraints played a role in her decision to attend CCC for her first two years. "With CCC being in my backyard, it made sense for me to go there instead of heading straight into a four-year university, and wasting time and money while I figured out what I wanted to do."

Millis, who is majoring in environmental studies, said her acceptance into the School of Arts and Science at UNC was the icing on top of the mentoring and "handholding" she received at CCC.

"CCC was just helpful in every aspect of life. It also helps that the program allows a number of visits to Chapel Hill over the course of your time at the community college," she said. "Of course, the school is right on Bogue Sound, so it's a luxury to go to school and be so close to the beach too."

Millis admitted that right after high school, she wasn't quite ready to venture off into a traditional university setting. She said being at CCC allowed her to mentally and physically prepare for a four-year college. She plans to pursue a master's degree in strategic communication after graduating this year and hopes to work for an environmental agency as a public relations specialist.

"We are a comprehensive college. It's a lifelong educational experience that you can continue to build upon, whether that's through additional education, certificates, or degrees or heading straight into the workplace," Hauser added. "Students build employable skills here. We have financial aid, mentoring programs, career coaches — we can walk you through a pathway to the career you want to be in."