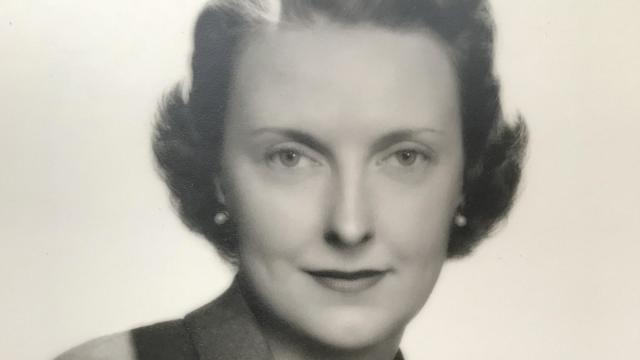 Carlene Roberts Lawrence, who worked her way up from a $150-a-month secretarial job to become, by wide acknowledgment, the first woman to break into the airline industry’s executive ranks, died Monday at her home in Manhattan. She was 105.

Her death was confirmed by Bob Lewis, the executor of her estate and her first cousin once removed.

Lawrence, who was known as Carlene Roberts at the time, was elected vice president of American Airlines in 1951, when few women were being admitted into the executive suites of any industry. When the company’s board elected her, at 37, newspapers and magazines published profiles of her that marveled at her corporate climb.

But a corporate office had scarcely been her dream destination when she graduated from the University of Oklahoma in 1934. She always said that if she had not needed a job during the Depression, she would have pursued her ambition to become an actress. Instead she learned shorthand and typing and went to work as a secretary for the Chamber of Commerce in Oklahoma City.

Her organizational ability was soon recognized by O.M. Mosier, a vice president of Braniff Airways, which began as an Oklahoma operation. When he joined American Airlines in Chicago as a vice president in 1938, he took her with him as a secretary.

The next year, the airline decided to move its general offices from Chicago to the newly opened La Guardia Airport in New York. To help with the move, Roberts was named director of a newly established housing department, a new kind of corporate unit at the time, with a mission to relocate 700 employees and their families to New York. As part of the effort, Roberts surveyed housing in 66 Long Island communities considered convenient to the airport.

In 1942 she was named assistant to Mosier and transferred to Washington. She was also given a raise, to $300 a month. She recalled in an interview in 1997 that when she was finally given a few minutes to meet C.R. Smith, the president of American, he told her that although he had agreed to her promotion, he did not generally approve of women in executive positions.

Back in New York, she said, she immediately went to Best’s department store and bought three “very tailored” suits — black, navy and beige.

In Washington, with World War II underway, Roberts was engaged in providing commercial aircraft for the military. After the war she became a lobbyist for the airline in its relations with the federal government. She was named an assistant vice president by American’s board in 1946 and vice president in 1951.

“She was the first woman executive in the airline industry by many years,” said Stanley Gewirtz, who was a vice president of the Air Transport Association in 1951 and later held executive posts with National Airlines, Western Airlines and Pan American World Airways. “At the time it was a business full of macho executives who regarded women as someone to stay home and look after children, but she was unique and superbly talented. She was the best lobbyist I ever tangled with.” (Gewirtz died in 2005.)

She did not remain a vice president for long, however. She resigned from American in 1954 to marry Lothair Teetor, an assistant secretary of commerce under President Dwight D. Eisenhower. Lewis said she resigned of her own accord to devote herself to her husband, who died in 1962.

In 1968 she married Justus Lawrence, who was the Army’s chief public relations officer in Europe in World War II and later had his own public relations and research company. He died in 1987.

Carlene Roberts was born in Water Valley, Kentucky, on Aug. 28, 1913, the daughter of Carl Dairon and Josephine (Lewis) Roberts. Lewis said that her father was struck and killed by lightning the year she was born and that her mother then became a domestic worker. She and her mother moved to Oklahoma in 1915.

She is survived by several step-grandchildren.