Car sales are rebounding, but they're still not back to pre-pandemic levels 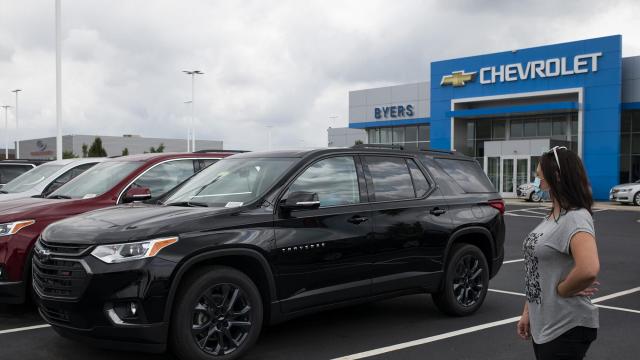 CNN — US car sales are coming back.

Major automakers reported their third-quarter sales were down compared to a year ago -- but far less than the substantial plunge in sales during the second quarter.

"It's coming in better than we thought," said Michelle Krebs, senior analyst with Cox Automotive.

Auto sales have been hurt by the large jump in unemployment, and millions more people working from home, leaving far fewer people needing a car to get to work. And many people can no longer afford a car because of the recession.

Temporary shutdowns of auto plants earlier this year also limited inventories of some of the more popular models.

Better than the train

Although the pandemic has provided some headwinds to car sales, it is also helping lift sales in some respects, according to Elaine Buckberg, GM's chief economist. Surveys show some consumers see private car ownership as a safe space, especially compared to public transit or ride hailing services for local trips, or flying for longer trips.

She said the pandemic has also created savings from foregone vacations, entertainment and restaurant meals that some buyers are applying to new car purchases. And some city residents have increased interest in owning a vehicle as some seek to move to the suburbs and others want to escape the city on weekends, she said.

The jump in new home construction has also helped drive demand for pickup trucks, and the rebound in the stock market after the sell-off earlier in the year has restored household wealth for some buyers who might have postponed some purchases.

Not getting back to normal anytime soon

Even if some consumer demand for cars is showing renewed strength, a substantial drop in fleet demand is proving difficult to overcome for most brands said iSeeCars analyst Karl Brauer. Fleet sales to rental car companies, which typically account for 10% of sales by themselves, have nearly ground to a halt as air travel has greatly slowed demand for car rentals.

Uncertainty about the economy, the election and the pandemic will continue to serve as a drag on sales he said. Krebs also noted credit is tightening, especially on the subprime part of the business.

"The rates are low if you have good credit," she said. "But we're seeing more and more people knocked out of the new car market because they can't get credit."

Krebs and Brauer are both forecasting full-year US sales of about 14 million vehicles, down from 17 million in 2019. Although Krebs doesn'tyet have a forecast yet for 2021 sales, she noted her firm doesn't believe the industry will return to 17 million anytime soon.

Some automakers said that September sales were ahead of where they were in 2019, although the timing of Labor Day weekend a year ago, when it was counted as part of August sales, makes direct month-to-month comparison somewhat difficult.

GM, the leader in US sales, reported a 10% drop in the quarter compared a year ago, way better than the 34% plunge in sales in the second quarter. While it did not break out September sales, it said industry and GM sales both rebounded significantly in September.

Fiat Chrysler reported a 10% drop in the quarter after sales tumbled 39% in the second quarter.

Toyota does break out September sales and said they were up 16.2%, from a year ago, partly because of the difference in the calendar. Its overall third quarter sales fell 11%. Sales had fallen 35% in the second quarter.

Other automakers are due to report results later Thursday, although Ford won't report results until Friday and Tesla has yet to say when it will report third-quarter sales.