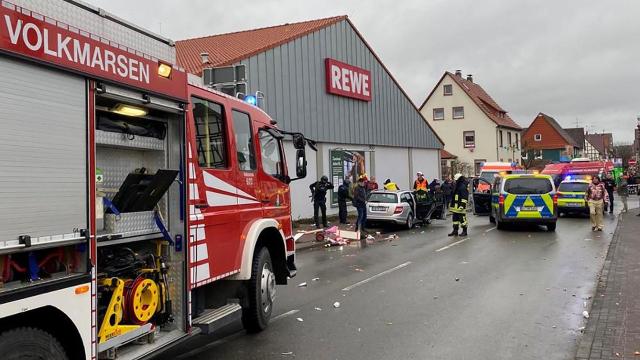 CNN — A car plowed into a crowd of people at a carnival parade in the German town of Volkmarsen, police in Kassel said Monday.

A police spokesman said that according to eyewitness accounts, the car "intentionally" rammed into the crowd at around 2.30 p.m. local time (8:30 a.m. ET).

''There are several dozens injured, some severely injured and unfortunately also small children," the spokesman said.

The spokesman said he could not confirm the driver's motive for the incident.

Police said earlier that the driver of the car had been arrested.

North Hessen Police have warned against the spread of unconfirmed information.

The force has asked witnesses who may have videos or photos from the scene to submit them through a special police portal, urging them not to share the images on social media.

Volksmarsen is a small town with roughly 6,000 residents, located near Kassel, in the north of the federal state of Hesse in central Germany.

All carnival events across Hesse were canceled on Monday after the incident in Volkmarsen. North Hessen Police said the move was a precaution.

Hanau, a city in southern Hesse, was the site of a deadly shooting attack by a suspected far-right extremist last week.

Police in Mainz, a city in the neighboring state of Rhineland-Palatinate, said security at the carnival event happening there on Monday had been tightened, with surveillance drones deployed.