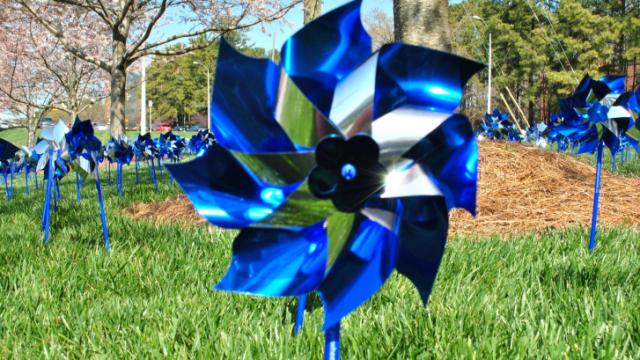 Raleigh, N.C. — A national campaign to prevent child abuse will make a stop in the WRAL Azalea Gardens Friday when employees are invited to plant "Pinwheels for Prevention."

It is the third year Capitol Broadcasting has participated in the visual awareness-raising effort. In 2012, American Tobacco and FOX 50 planted over 1,000 pinwheels on the lawn between their office buildings in Durham to bring awareness to the work of Prevent Child Abuse North Carolina (PCANC).

2014 marks the second year the other divisions of the company, headquartered on Western Boulevard in Raleigh, have joined in.

The pinwheel is the symbol of the bright future all children deserve. The display of a pinwheel garden draws raises awareness that abuse, neglect, domestic violence, household substance abuse and other trauma can lead children to adopt risky health behaviors that can translate into life-long health problems.

Founded in 1979, PCANC reaches over 250 organizations across the state with a range of family-strengthening programs.

The WRAL Azalea Garden is free and open to the public with ample parking. The pinwheel garden begins April 11 at 10 a.m. and will remain in place, weather permitting, for about two weeks.