Canada’s Message to Teenagers: Marijuana Is Legal Now, But Please Don’t Smoke It 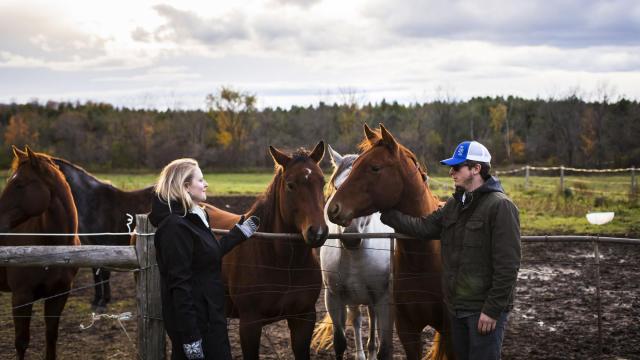 THORNBURY, Ontario — Parents and grandparents jammed the small hall of Thornbury, a sleepy ski town north of Toronto, to glean tips on how to talk to their teenagers about the potential harms of marijuana.

Held less than a week before Canada was set to legalize cannabis, the public health session had a message for parents: Marijuana would be legal for adults, but it was not safe for young people. And parents needed to instill in their children the idea that pot could be dangerous.

“It’s been proven the brain doesn’t stop growing until you are 25, and yet we’re legally selling it to people at 19,” Jenny Hanley, an addictions counselor, said as she left the meeting, 2 1/2 hours north of Toronto. “What the hell is our government thinking?”

Canada last month became the second country to make it legal for adults to buy, grow and consume small amounts of marijuana. But it also made it a crime to give it to anyone younger than 19 or 18, depending on the province, and set a penalty of up to 14 years in prison for doing so.

At the same time, the government began an $83 million public education campaign, much of it targeting Canadian youths, that warns of pot’s dangers.

But persuading teenagers not to see legalization as a green light to use marijuana will be difficult, experts say, not to mention that past anti-drug efforts have offered little evidence of success.

And when it comes to marijuana and the teenage brain, the science is far from clear.

Officials had argued that regulating the cannabis market, and cracking down on illegal sellers, would reduce its soaring use among Canadian teenagers, who, according to a 2013 UNICEF report, already use it more than young people anywhere else in the world.

“The most disingenuous element of legalization is that it will keep it out of the hands of children,” said Dr. Benedikt Fischer, a senior scientist at the Center for Addiction and Mental Health in Toronto. “It is a big experiment, in many ways.”

“A lot of young people have the notion this is a very benign substance of no risk — it’s organic, it’s natural and it’s medicine,” said Bill Blair, the country’s minister in charge of marijuana legalization, and formerly the Toronto police chief.

“When you start giving people the facts to replace the mythology and misinformation, people make smarter and better decisions,” he added.

But, as parents are discovering, sifting through the science and guiding their teenagers is tricky.

Lounging on a bench at the back of the Thornbury session was Jared Kaye. He smoked marijuana for the first time at age 9 while also bingeing on alcohol, and then added harder drugs. He started rehab at 15 and became homeless.

He and another teenage addict were taken in by Hanley to live in her home near Flesherton, Ontario.

Paul Thompson, a businessman from Stratford who attended the session while in town on vacation, sees marijuana as less dangerous.

When his 21-year-old son was arrested a couple of years ago on marijuana charges, Thompson decided to provide him with marijuana himself, to ensure it was not laced with other drugs.

The confounding thing is that both men were correct.

Studies have shown that marijuana use in adolescents can impair brain function for some time after the cannabis has left their bodies, and a concern raised by some experts is that many adolescents use cannabis to self-medicate for anxiety or depression.

Most scientists agree the risk to young brains is greatest for those who start smoking at age 12 or younger, smoke regularly and choose high-potency marijuana.

Smoking is also dangerous for young people with family histories of serious mental illness, like schizophrenia or bipolar disorder.

But for young people who start lightly experimenting with the drug at a later age, the risks of long-term damage to their growing brains are reduced.

“It’s a reasonable statement to say it could have impact on the developing brain,” said Matthew Hill, a neuroscientist with the University of Calgary who has studied cannabinoids for 18 years. “That’s not the same thing as saying it definitively will.”

“The evidence is not as consistent and compelling as some people like to spin it,” he added.

While some studies found that regular cannabis use by adolescents changed brain structure and long-term cognitive functioning, follow-up studies disputed those findings and concluded that alcohol use, cigarette smoking and family background were the main drivers in IQ reduction.

A recent analysis of 69 studies on young, frequent cannabis users, published in JAMA Psychiatry, found that the negative effects on cognitive functioning dissipated after 72 drug-free hours.

“Cannabis is correlated with lots of things,” said James MacKillop, the co-director of McMaster University’s medicinal cannabis research center in Hamilton. “Teasing out whether it’s causally related is a much more complicated thing.”

“If you are using cannabis when you are 12 or 13, then there are probably lots of other things going on,” he continued. “There might be poor parental oversight, more early life stress or family disorganization.”

To make matters more confusing, there are no certain strategies to stop young people from trying cannabis.

Some public health units have adopted a harm-reduction strategy, urging teenagers to take more “cannabis-free” days and not drive stoned. Others are preaching abstinence.

“Because it’s legal, it’s not safe,” said Dr. Paul Roumeliotis, the medical officer of health for Eastern Ontario. “That’s our real message.” Drug prevention researchers say they know what does not work.

For example, the popular DARE program, which sent police officers into school to teach children how to “just say no” to drugs, had no effect or worse, studies in the United States found. In some cases, it increased their use of alcohol, cigarettes and other drugs.

Rebecca Haines-Saah, an associate professor of public health at the University of Calgary, who studies teenage cannabis use and harm prevention, urges parents to talk to their children early and regularly about the consequences of all substances, including caffeine.

“If we aren’t honest with kids, they will find the information elsewhere,” she said.

With all the discussion about cannabis in Canada as legalization day approached, many parents were alarmed to discover how acceptable it had become among the country’s youths. According to a recent census bureau report, 32.7 percent of teenagers had smoked marijuana in the previous three months, for example. It also seems Canadian teenagers have developed myths to counter claims about cannabis as a gateway drug, said Fischer of the Toronto addiction center.

According to a 2017 national cannabis survey, 19 percent of consumers did not think it affected their driving skills. Among young people, there’s a myth that it even improves them, public health officers say.

Fischer and other experts consider it unlikely that the law will reduce use among young people. In Colorado and Washington state, where recreational cannabis was legalized for adults in 2014, usage rates among youths remained relatively unchanged, according to state reports.

At the Thornbury meeting, Kaye said he thought parents should take an individual approach.

His parents, he said, were strict, which stoked his rebellious nature. “For me, I need love,” Kaye said. “I need to feel cared for.”

His advice seemed more like a guide to parenting, than a drug-prevention plan:

“Be open with your kids,” he said. “Try to have a close relationship so they are comfortable telling you what they tried and what their friends are doing.”