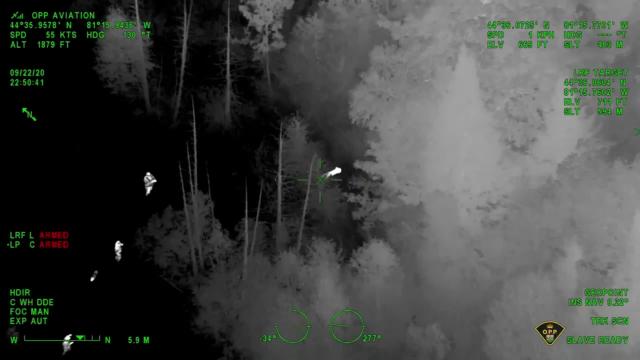 CNN — Police in Ontario, Canada, used a helicopter, night vision technology and canine teams to find a 6-year-old special needs boy who went missing in a forest near his house.

On September 22, Ontario Provincial Police (OPP) received a call from a panicked mother, according to social media posts.

"My son, who is special needs, who is 6 years old, is missing," the mother can be heard saying. "He's been missing for about 45 minutes, we've been looking for him."

The mother said she thinks he is in the forest behind their property, and worried about what to do. "It will be dark before we know it," she said.

OPP released night vision video of the dense forest, which shows the outline of a small child lying down.

"It's just near the water line there," the pilot says.

The video then shows the outline of several people and a dog on the ground walking towards the boy.

Guided by a laser from the helicopter, officers make contact with the boy and report, "We're bringing him out. He appears to be in good condition."