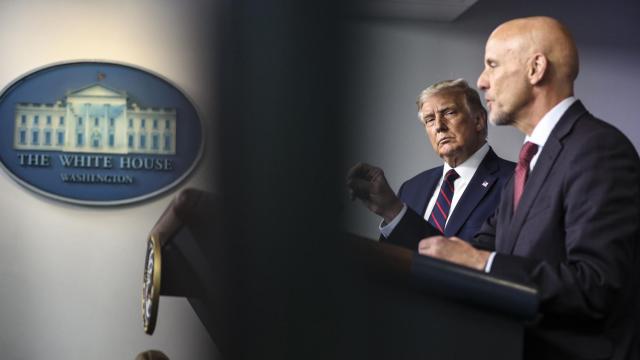 In a five-minute video posted to his Twitter account Wednesday, President Donald Trump stood in front of the White House and offered a lavish endorsement for a treatment he had received while hospitalized at Walter Reed National Military Medical Center.

“They gave me Regeneron, and it was like, unbelievable; I felt good immediately,” the president said, referring to an experimental cocktail of monoclonal antibodies produced by pharmaceutical company Regeneron. “I want everybody to be given the same treatment as your president.”

The president’s video raised many questions, including whether it was likely that the antibody cocktail had such a dramatic effect in such a short time. (Some physicians were skeptical.) But for one question, at least — how the president planned to ensure that a therapy not yet approved by the Food and Drug Administration would soon be available to “everybody” — he had a ready answer: “I have emergency use authorization all set,” the president said in his video. “And we’ve got to get it signed now.”

The president’s mention of the emergency use authorization, or EUA, is the latest stage of a transformation that has seen a formerly obscure corner of regulatory law become a centerpiece of the federal government’s response to the coronavirus pandemic. Vaccines, drugs and medical devices sold in the United States generally require FDA approval, a rigorous process that is meant to demonstrate their safety and effectiveness. For more than 15 years, however, the FDA has had the authority, when certain conditions are met, to grant EUAs, which allow the sale of unapproved medical products.

The FDA has granted such authorizations during several previous disease outbreaks, including H1N1 flu in 2009 and Zika in 2016, but the coronavirus pandemic has seen the deployment of EUAs on a new scale.

Since February, the agency has granted more than 300 COVID-related emergency use authorizations. Most were for diagnostic tests, but they were also granted for personal protective equipment, blood purification devices, ventilators and therapies. (Some of these EUAs were the subjects of considerable controversy, most notably one that authorized the use of chloroquine and hydroxychloroquine to treat COVID-19, which was later revoked, in June.) Many observers expect that COVID vaccines will first be made available in the United States under an EUA.

The regulations that govern EUAs were originally enacted as part of the Bioshield Act, a 2004 law designed to help the nation prepare for chemical, biological, radiological and nuclear terror attacks. FDA approval has long been recognized as the gold standard for medical products, but the requirements to obtain that approval, which often include clinical trials, inspections of manufacturing facilities and detailed statistical analyses, can be time-consuming. In the wake of the Sept. 11 terrorist attacks and especially the anthrax mailings later that year, it was widely acknowledged that even the agency’s fastest approval mechanisms were too slow and inflexible to handle a true emergency.

To address these concerns, President George W. Bush proposed Project Bioshield during his 2003 State of the Union address. The project established incentives for companies that were developing medical countermeasures, allowed the federal government to stockpile unapproved products and permitted the FDA to authorize the emergency use of those products.

The Bioshield Act, along with the laws that later modified it, was not intended as a carte blanche. For instance, an EUA can only be granted during a declared public health or national security emergency and is supposed to be used only for products that have no adequate, approved or available alternatives. But the FDA was granted wide discretion to decide whether a product ought to be made available to the public. By law, the agency can grant EUAs to products that “may be effective,” whose “known and potential benefits” outweigh “the known and potential risks.” It is up to the agency, however, to determine what those criteria mean.

“It was deliberately a quite flexible kind of standard,” said Dr. Jesse Goodman, director of the Center on Medical Product Access, Safety and Stewardship at Georgetown and the FDA’s chief scientist from 2009 to 2014. EUAs are intended to be evaluated on a case-by-case basis; the FDA might tolerate more risk for a drug designed to treat a disease with a high mortality rate, such as Ebola, than for a vaccine that would be given to healthy people to stop a disease like COVID-19, Goodman said. But, he added, EUAs were not meant as a substitute for traditional approvals: “The intent originally was that ultimately you should be collecting data and moving these products toward approval,” even after the emergency authorization was granted.

However, it can be difficult to fully enroll a product in clinical trials after it has received an EUA, Goodman said, because clinical trials typically impose more stringent requirements on patients than an EUA would. “Now we have tens of thousands of people getting convalescent plasma” — a COVID-19 treatment that was granted an EUA in August — “and we still don’t know whether it works,” he said.

Another potential hazard of emergency authorization became apparent not long after the Bioshield Act was signed into law, when the FDA granted its first EUA, at the request of the Defense Department, for the use of an anthrax vaccine, in 2005. That authorization suggested to some people, including Chris Shays, then a Republican congressman from Connecticut, that the EUA process provided an avenue for political interference. The apparent urgency “appears to be the product of preventable legal and regulatory failures,” Shays wrote in a letter to the Secretary of Health and Human Services, “rather than any validated external threat.”

The actions of the Trump administration during the COVID pandemic have renewed these concerns. In May, Rick Bright, the former head of the Biomedical Advanced Research and Development Authority, alleged in a whistleblower complaint that he had arranged an EUA request for hydroxychloroquine and chloroquine as a “compromise position” to head off pressure by administration officials to make the drugs available under a less restrictive protocol known as “expanded access.”

In late September, Trump said that he was considering blocking the FDA’s vaccine EUA guidelines, which made it unlikely that a vaccine would be authorized before the presidential election, because he saw them as “a political move more than anything else.” And Trump’s insistence, in the video he posted Wednesday, that “we’ve got to get” an EUA for the Regeneron antibodies “signed now” was an extraordinary intervention into a process that is usually left to career scientists at the FDA. (A few hours after Trump tweeted the video, Regeneron announced that it had officially applied for an EUA, although the company had previously suggested its intention to seek one.)

FDA officials, for their part, have asserted their determination throughout the pandemic to keep EUAs free from political interference. Dr. Peter Marks, head of the FDA’s Center for Biologics Evaluation and Research, said in an interview with the Journal of the American Medical Association on Monday that meetings of the FDA’s vaccine advisory committee would be broadcast online for maximum transparency.

“We want to make sure that the American public knows that what they’re getting is not pressure to do something but what comes from looking at the data,” Marks said. And an FDA spokesperson pointed to a speech given by the FDA commissioner, Dr. Stephen Hahn, Tuesday to the Food and Drug Law Institute in which he emphasized that the agency’s decisions have been and will be “based on science and data, not politics.” Dr. Eric Topol, a professor of molecular medicine at Scripps Research, said that Trump had not made it easy for the agency to maintain its appearance of independence. Topol believed that the Regeneron antibodies would have been granted an EUA without Trump’s endorsement, and possibly before Election Day, but he was concerned that the president planned to “use this as a political lever just as he was planning on using the vaccine.”

Even so, Topol said he was heartened that the FDA had released its vaccine EUA guidance, on Tuesday, despite Trump’s initial reluctance. The guidelines call for safety and efficacy data that Marks has described as “EUA-plus” and include a requirement that manufacturers follow participants in late-stage clinical trials for a median of two months to ensure the long-term safety of a vaccine.

“I’ve been very hard on Hahn and the FDA, but I was relieved and absolutely delighted to see him standing up,” Topol said.

It will be up to vaccine manufacturers to decide whether to request EUAs for their COVID-19 vaccine candidates. Many public health experts say that there are conditions under which an EUA for a coronavirus vaccine would be appropriate. An application for formal approval of a vaccine can require tens of thousands of pages of documentation, and even a priority review of a new vaccine typically takes eight months after clinical trials are completed.

“There’s a lot of I’s you have to dot and a lot of T’s you have to cross” to get a vaccine approved, said Susan Ellenberg, a former FDA official and a professor of biostatistics at the University of Pennsylvania. After a clinical trial was completed, she said, she could imagine that, absent any safety issues, agency officials “might issue an EUA before they tied up everything for the formal approval.”

Still, Ellenberg noted, “We’ve seen an unprecedented involvement of the high-level administration in some of these issues.”

Because it is unclear how much political pressure is being put on the scientists at the FDA, she said, she would want to see the data from clinical trials before deciding whether to trust a vaccine authorized under an EUA.

“If it looked to me like it was very effective, and I didn’t see any safety problems, then definitely,” Ellenberg said. “I think I would recommend people getting it. I would get it myself.”