Can the stock market bull keep raging in 2018? 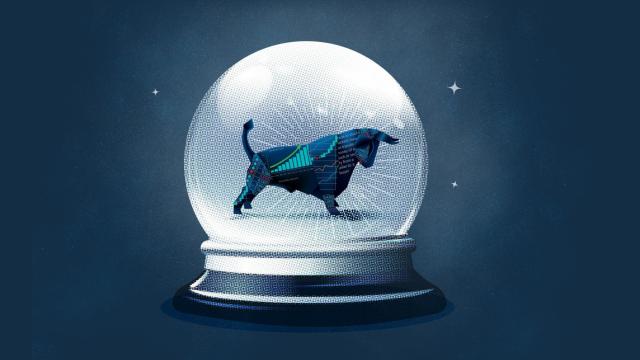 Well, if the first trading day of 2018 is any indication, things look promising. The Dow quickly leaped to a triple-digit point gain Tuesday morning. And many experts are predicting another solid year for U.S. stocks in 2018, albeit not as strong as last year.

Bill Stone, chief Investment strategist with PNC Asset Management Group, noted in a report Tuesday that long-term average total returns for the S&P 500 (which includes dividends) are about 10% annually.

But a 10% gain on top of last year's runup wouldn't be too shabby.

Sure, some are starting to worry that stock prices may be too high (especially in the tech sector) and that much of the good news for 2018 may be priced into the market already.

Yet many bulls point out that there is still much to like about the U.S. right now. There is the potential for a boost to profits from lower corporate taxes. The job market and overall economy continues to hum along. Consumer spending remains resilient too.

Jason Pride, director of investment strategy at Glenmede, said in a recent report that tax reform should also help boost capital spending plans by businesses since corporations will now be able to expense such investments right away.

What's more, the global economy seems to be on the upswing. Europe and Japan are clearly on the mend. Fears of a hard landing in China seem to be waning. And the worst might finally be over in hard hit emerging markets like Brazil and Argentina.

This synchronized growth should lead to even higher revenue and earnings growth for many of the blue chip American companies that helped propel the market higher last year. Think of firms like Boeing, Caterpillar, Apple, Visa and Walmart.

But if there is a significant headwind for stocks, it could be the proverbial case of there being too much of a good thing, namely that growth finally brings about more inflation.

William Lynch, director of investments with Hinsdale Associates, wrote in a note to clients Tuesday that investors need to keep a close eye on commodity prices.

"Increased economic growth brings increased demand and commodities such as oil and metals could rise along with agricultural products and materials," Lynch wrote.

"The price of oil ended the year at nearly $60 a barrel, its highest level in over 2 years, and could go even higher with increased demand and coordinated production cuts by OPEC," he added.

If this trend continues, that could push the Federal Reserve to raise rates more aggressively than investors might like -- which could wind up slowing the economy.

So far though, there is little evidence that consumer prices are rising dramatically just yet. Wages have been held in check too.

That means that incoming Fed chair Jerome Powell is unlikely to deviate from the playbook of current Fed chair Janet Yellen and shock Wall Street with faster and bigger rate increases than currently expected.

Assuming that the Fed doesn't upset the apple cart, there is another risk that some fear the market has been ignoring for too long -- global politics.

Stocks soared in 2017 without taking a breather for a correction despite the volatility in Washington, tension in North Korea and worries about Brexit. How much longer can the market hold its nose and pretend that the world is a stable place?

"A Trump-Kim throw-down in North Korea is still on the horizon, Brexit moves from theory to reality as we approach the March '19 exit date, and the risk of populism continues to have negative implications for elections in Italy, Mexico, and Brazil," noted Dave Lafferty, chief market strategist at Natixis Investment Managers, in a report.

"Thus far, buoyant markets have overpowered geopolitics, but that could change in 2018. Such is the nature of black swans," Lafferty added.