Can a ‘No Excuses’ Charter Teach Students to Think for Themselves? 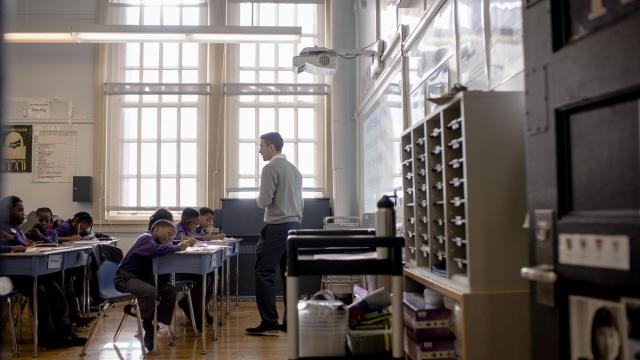 Several years ago, Achievement First, a charter school network serving primarily low-income black and Hispanic students, got an unpleasant wake-up call: Its students had done well on tests, but fewer than a third of its high school graduates were earning college degrees on time. That was better than the 14 percent national college completion rate for students from low-income backgrounds, but it was far below the network’s hopes.

And it raised a question: Was the schools’ highly structured, disciplined approach to behavior and learning giving students the tools they needed to succeed at the next level?

Achievement First is not the only charter wrestling with that issue. “That is one of the questions everybody’s been asking as they design high schools,” Dave Levin, one of the co-founders of the KIPP network, said in an interview.

In response, Achievement First’s leaders set about designing a new school model that they hope can maintain their high expectations and strict rules, while letting students develop independence and a sense of identity.

Some think it will be difficult. “There is a real dilemma confronting ‘no excuses’ charter networks as they shift their instructional model to encourage deeper learning,” Shael Polakow-Suransky, the president of the Bank Street College of Education, said in an email. Their focus on discipline, he said, “can undermine the autonomy and student voice so critical to developing independent thinkers.”

And even as Achievement First was honing its new model, which it calls “Greenfield,” in 2016, students at its New Haven, Connecticut, high school, Achievement First Amistad High School, held a walkout to demand racial diversity on the staff and fairer discipline.

For now, the network is only using the Greenfield model in two new middle schools, in Brooklyn, New York, and Providence, Rhode Island, and in a kindergarten-through-sixth grade school in New Haven that gradually adopted the approach over the last two years. (The network has 34 schools in all, serving some 12,500 students.)

The model emphasizes what the network calls “student-directed,” or online, learning; three-times-a-year special classes called expeditions, meant to allow students to explore their interests and discover possible careers; a social-emotional curriculum focused on developing students’ sense of identity and community; and a beefed-up role for parents and other caregivers and mentors. The aim is to cultivate students who are more self-directed and resilient, as well as to give parents confidence in their ability to support their children through the challenges of college.

Dacia Toll, the network’s co-chief executive officer, said that those goals came out of intensive research, in which consultants interviewed parents, staff and alumni. Many alumni said that they found the transition to college difficult.

“One said, ‘In college you have to teach yourself more than half the content on your own,'” Toll said. That is very different from what is required in high school, she said, “and that sort of led to the whole concept of self-directed learning.”

Inspired by Summit Public Schools, a charter network based in Silicon Valley, Achievement First built its own online platform to teach humanities, math and science, along with vocabulary and grammar. Students are expected to complete online units by certain dates and get weekly progress reports sent home.

Toll said the program cultivated students’ ability to work autonomously, and also instilled the kind of historical and scientific background knowledge that is critical to reading comprehension, and a significant cause of the achievement gap between students from high- and low-income backgrounds. For much of the day, each classroom is split in two, with one teacher working more traditionally with half the students while a second teacher supervises students wearing noise-cancelling headphones and working on their own on laptops.

At Achievement First Aspire Middle School in Brooklyn on a day in November, that meant half the fifth-graders in one room were discussing “A Long Walk to Water,” a novel set during the Second Sudanese Civil War, while the other half the class read or watched videos about ancient Greece on their computers. To ensure the students working online were absorbing information, they had to fill in answers in a workbook as they progressed. When a student wanted to take the end-of-unit online test, the teacher looked over the workbook first.

Larry Cuban, an emeritus professor of education at Stanford University who has written about Summit’s high schools, said he believed that teachers’ use of the online learning platform there held promise. Summit created the platform as part of an overhaul of its model several years ago, after it, too, found that its graduates were dropping out of college at alarmingly high rates.

Cuban said he was particularly impressed with the way that Summit schools asked students to set goals for themselves.

“When they set their own goals, the teacher can say, ‘Why are you doing this? Why do you want to work on these skills?'” he said. “You’ll hear kids say, ‘Well, I feel that this is important to me, because I’ve done poorly here,’ or ‘I need help here.’ That kind of openness and honesty in a conversation between a teacher and a kid or between kids is not common in schools.”

But he added that he thought the effect of online teaching tools depended on how they were implemented and that the ultimate test, for both Summit and for Achievement First, would be what happens to college graduation rates.

Achievement First’s Greenfield model also emphasizes setting goals. Twice a week students meet with a teacher, referred to as a “goal coach,” to go over their progress in different areas and set goals for the week.

But Tanesha Forman, a fifth-grade teacher at Elm City College Preparatory Elementary School, the Greenfield school in New Haven, said she thought that she and her colleagues still had a ways to go in giving students autonomy.

“I think we’re very proactive — like, if we see scholars are not where they need to be, we’re, like, ‘OK, here’s what you need to do,'” she said.

“I am trying to get to that place on my own where I let students feel the weight of their decisions,” she said.

Aylon Samouha, a consultant who led the team that developed the Greenfield model, said the team came to believe that Achievement First students were not sufficiently engaged in school. The expeditions, also borrowed from Summit, are intended to spark passions and inspire long-term ambitions. Each expedition — there are three a year — is two weeks long, for three hours a day. Students in third grade and up get some choice in which ones they pursue. All the expeditions are intended to be hands-on, with two full-day field trips. Last year Elm City College Prep offered, among others, a debate-focused course taught by a former teacher at the network who had gone on to law school; a course on building and architecture; and “Mini Med School.”

Other aspects of the school model are designed to cultivate students’ sense of identity. Samouha said that the research team believed that, just as “stereotype threat” — or the fear of being negatively stereotyped — can lead to academic underperformance, feeling a strong sense of identity and that they are understood could lead students to perform better.

Twice a week, students participate in what the network calls “circles” — a structure borrowed from the social-emotional curriculum of another charter network, Valor Collegiate Academies, in Nashville, Tennessee.

At Aspire Middle School, a circle of fifth-grade girls started with the teacher leading the students in taking several deep breaths. Then the students went around the circle and each said how they were feeling that day, in terms of an emoji. After the teacher followed up with two girls who said they had felt mad or sad to ask what was going on, another girl stood in the middle of the circle and read a short assignment she had written about herself — whom she lived with, what activities she enjoyed. Then other students jumped into the middle of the circle to share ways in which they related to things she had said.

Feeling like no one understands you, Samouha said, can reinforce a student’s sense that they don’t belong, or are not good enough. The network is betting, he said, that if students feel they can trust those around them, “you can release some of that and free up your working memory to work on the tasks at hand.”

Samouha said that one of the surprising discoveries in his team’s interviews with alumni who had dropped out of college was that, in some cases, their parents had actually encouraged them to drop out, because they did not like seeing them struggle and did not know that such difficulties were normal and surmountable. He said the Greenfield team traced that back to the network having not made the parents full partners in their children’s schooling.

So in the Greenfield model, parent-teacher conferences are student-led, and attended by the members of a student’s “dream team,” which includes parents or other caregivers, as well as other mentors, like older siblings, pastors, coaches or family friends.

“We’re not going to solve this through a weekly parent seminar on challenges your child will face in college,” Samouha said. “We’re going to solve it by literally building an experience where parents are at the table with teachers and students.”

So far, there is little data to suggest whether the new model is working or not — test scores at the New Haven Greenfield school have been mixed. Still, the network feels confident enough about the model that it is planning to open one or two more Greenfield schools in New York next year. The network’s ultimate goal is to raise its college completion rate to 75 percent, and it says among its more recent classes about half of graduates are on track to finish college.

“We’re data-based people,” Toll said, “but to a certain extent we just had to say that, just because we can’t measure it doesn’t mean we don’t care about it.” Of her own assessment, she added, firmly, “I think it’s better.”