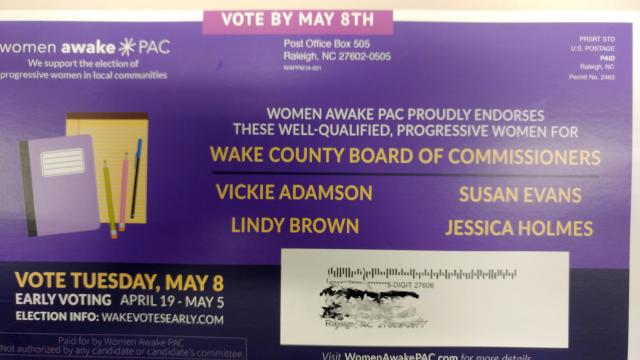 Raleigh, N.C. — The heat was turned up Friday on the discord that four races for seats on the Wake County Board of Commissioners have created within local Democratic circles.

Longtime party activist David Bland filed a campaign finance complaint with county elections officials, alleging that some deep-pocketed donors have circumvented donation limits and have coordinated the work of their political action committees with the campaigns of Lindy Brown, Susan Evans, Vickie Adamson and Jeremiah Pierce.

Bland's complaint notes that donors Ann and John Campbell and Dean and Sesha Debnam each gave $5,200, the maximum allowed per election cycle, to Evans and Adamson in recent months. The Debnams also gave $5,200 each to Brown, while the Campbells gave $5,000 each.

The Campbells and Dean Debnam also provided the maximum allowed support to Women Awake PAC, which has endorsed Brown, Evans and Adamson in next Tuesday's primary. The PAC recently sent a mailer to local voters on behalf of the three candidates and Commissioner Jessica Holmes, who is unopposed in this year's election, and listed the flier as an in-kind donation to each.

"Through at least two PACs, perhaps among others, the Debnams and the Campbells have engaged in paid campaign advocacy," the complaint states. "The Debnams and the Campbells appear to have violated state contribution limits by giving more than $5,200 to multiple campaigns. The evidence suggests they have also violated state law by 'giving in the name of another,' as shown by their efforts to funnel additional money through multiple organizations while ultimately providing valuable paid campaign advocacy to their chosen candidates."

Michael Weisel, a lawyer for the two PACS, called the complaint "unsubstantiated" and said his clients would "demonstrate their legal compliance."

"My clients have scrupulously followed all applicable campaign finance laws and regulations regarding their spending and have been advised by counsel throughout this process. This appears to be a last-minute diversion by candidates who are not comfortable with critical public debate," Weisel said in an email to WRAL News.

"I have an opponent who's more concerned about these donors than running against me," she said.

Noting that some of the same people work on the campaigns and with the PACs, the complaint alleges illegal coordination between them.

Evans denied any coordinated work with the PACs, saying she has her own campaign consultant.

"I don't control what [the PACs] do," she said, noting she is "not really crazy" about some of the fliers she's seen.

The complaint also alleges that the challengers' campaigns failed to report the fliers supporting them as in-kind donations in their quarterly campaign reports.

Evans said she didn't know about the mailers before she filed her report and plans to include them in her next report.

Adamson, Brown and Pierce didn't respond to requests for comment.