Critic of Pope Launches Rebellion vs. the Vatican 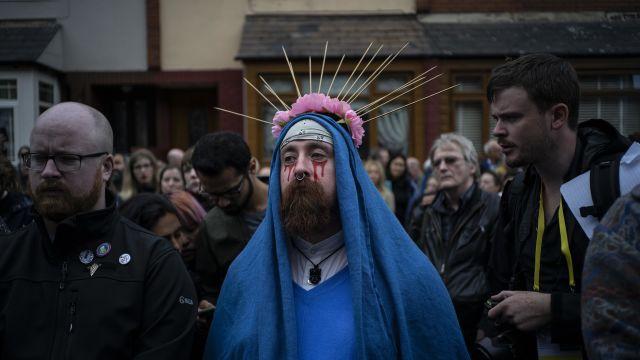 DUBLIN — On the final day of Pope Francis’ mission to Ireland, as he issued wrenching apologies for clerical sex abuse scandals, a former top Vatican diplomat claimed in a letter published Sunday that the pope himself had joined top Vatican officials in covering up the abuses and called for his resignation.

The letter, a bombshell written by Archbishop Carlo Maria Viganò, the former top Vatican diplomat in the United States and a staunch critic of the pope’s, seemed timed to do more than simply derail Francis’ uphill efforts to win back the Irish faithful, who have turned away from the church in large numbers.

Its unsubstantiated allegations and personal attacks amounted to an extraordinary public declaration of war against Francis’ papacy at perhaps its most vulnerable moment, intended to unseat a pope whose predecessor, Benedict XVI, was the first pontiff to resign in nearly 600 years.

Viganò claimed that the Vatican hierarchy was complicit in covering up accusations that Cardinal Theodore McCarrick had sexually abused seminarians and that Francis knew about the abuses by the now-disgraced American prelate years before they became public. Yet, the letter contended, Francis did not punish the cardinal, but instead empowered him to help choose powerful American bishops.

In a news conference on the papal plane back to Rome late Sunday evening, Francis was asked whether there was any truth to the claim that Viganò had personally informed him in 2013 of McCarrick’s history of abuse. He was also asked whether Benedict had sanctioned the American cardinal, as the letter also claimed. The pope did not deny it, but sidestepped the questions by insisting he would not dignify them with a response.

“I will not say a single word about this,” he said. “I believe the statement speaks for itself. And you have the sufficient journalistic ability to make your conclusions. It’s an act of trust.”

The 7,000-word attack on Francis’ allies in the Vatican, published early Sunday Dublin time by several conservative Catholic outlets antagonistic to the pope, represented a steep escalation in the long-standing, and increasingly caustic, rivalries within the church.

Factions have battled over the direction the church has gone under Francis, with conservatives, especially some U.S. cardinals and bishops, warning that his pastoral and inclusive approach and emphasis on social issues dilute church doctrine and pose a mortal threat to the future of the faith.

Already on Sunday afternoon, the battle was being joined.

Cardinal Blase J. Cupich, the archbishop of Chicago, who is aligned with Francis and was a target of Viganò's letter, said in a phone interview that he suspected English speakers had helped Viganò write the letter. He called the pope “a man of integrity.”

“If he makes a mistake, he admits it,” Cupich said. “That’s why I’m convinced this is something that he is going to respond to in an appropriate way.”

Cupich also said the timing of the letter raised questions.

“I’d have to leave it up to him to ask him why he timed the release of this at this moment, particularly if he considered this information so very critical and important,” the cardinal said.

Archbishop Charles J. Chaput of Philadelphia, a leading conservative voice in the Catholic Church, who according to the letter was disparaged by Francis, vouched for Viganò's integrity in a statement from his spokesman.

The willingness of the pope and his allies to reach out to gay Catholics has infuriated conservatives, many of whom, like Viganò, blame homosexuals for the sex abuse crisis. The pope has argued that the abuse is a symptom of a culture of privilege and imperviousness among priests who value the church’s traditions over its parishioners.

Last month, Francis accepted the resignation of McCarrick, the first such resignation in living memory, after The New York Times and other news outlets published accounts of the alleged abuse and an internal investigation by the American church deemed credible an accusation that he had sexually abused a minor.

Viganò said that Benedict had already punished McCarrick for his abuse of seminarians and priests. The archbishop writes that Benedict had banned the cardinal from publicly celebrating Mass, from living in a seminary and from traveling to give lectures.

There is no public record of such a sanction, and the cardinal continued to celebrate Mass. And in 2012, McCarrick joined bishops in the Vatican to sing happy birthday to Benedict as they presented him with a fresh strawberry-and-kiwi custard cake.

Cupich said he was not aware of any restrictions that Benedict put on McCarrick, as Viganò asserts.

Viganò accused Francis of failing to apply the sanctions on McCarrick and instead rehabilitating and entrusting him to help choose powerful U.S. bishops, including Cupich.

Viganò despises many of those bishops, who now wield influence and promote Francis’ pastoral approach, and he complained in the letter of being deprived of the voice typically given to a papal nuncio in choosing them. He targeted those bishops and cardinals by name, but saved his strongest fire for Francis.

“He knew from at least June 23, 2013, that McCarrick was a serial predator,” Viganò wrote.

“In this extremely dramatic moment for the universal Church,” he wrote, “he must acknowledge his mistakes and, in keeping with the proclaimed principle of zero tolerance, Pope Francis must be the first to set a good example for cardinals and bishops who covered up McCarrick’s abuses and resign along with all of them.” At a 2013 reception in the library of the Apostolic Palace in the Vatican shortly after Francis was elected pope, Viganò was effusive with praise for him, saying his audience was “extremely nice, extremely warm.”

But in the letter, he said he had received an icy reception from Francis. And he said the pope had told him on June 23, 2013: “The bishops in the United States must not be ideologized, they must not be right wing.” Francis then added, according to Viganò, that they must not be left wing, “and when I say left-wing, I mean homosexual.”

It was then, he said, that Francis asked his opinion of McCarrick.

“Holy Father,” Viganò said he had responded, “I don’t know if you know Cardinal McCarrick, but if you ask the Congregation for Bishops there is a dossier this thick about him. He corrupted generations of seminarians and priests, and Pope Benedict ordered him to withdraw to a life of prayer and penance.”

Viganò, who blames gays for the child abuse crisis that has destroyed the church’s standing in many countries, dedicated entire sections of the letter to outing cardinals who he claims belong to what he characterizes as a pernicious “homosexual current” within the Vatican.

“These homosexual networks,” he wrote, “which are now widespread in many dioceses, seminaries, religious orders, etc., act under the concealment of secrecy and lies with the power of octopus tentacles, and strangle innocent victims and priestly vocations, and are strangling the entire church.”

Viganò is no stranger to stirring trouble in the Vatican.

A cultural conservative born into a wealthy family in Varese, Italy, he received the title of archbishop from Pope John Paul II in 1992. He later joined the church’s diplomatic corps, one of the traditional sources of power in the Vatican, which gave him access to much of the information he alleges in the letter. In 2009, he was installed by Pope Benedict XVI as secretary of the governorate of Vatican City State, a position similar to mayor of Vatican City.

Benedict wanted him to enact government overhauls, but Viganò's efforts in pursuit of that goal earned him powerful enemies.

Those appeals and protests, later leaked by the pope’s butler, became the heart of the church scandal known as VatiLeaks, which many church observers say contributed to Benedict’s resignation. Francis removed Viganò from his job as nuncio to the United States in 2016, in part for nearly ruining the pope’s trip to the United States by giving papal face time to Kim Davis, the Kentucky clerk who refused to issue marriage licenses to same-sex couples.

Soon after his departure, a criminal investigation into an archbishop in Minneapolis-St. Paul revealed a memo that Viganò had written in 2014 in an effort to suppress a church investigation into alleged homosexual activity by the Minnesota prelate, Archbishop John C. Nienstedt.

Since his return to Rome, Viganò has associated with traditionalist Catholics deeply critical of Francis.

Viganò's letter, while especially inconvenient for the pope, who spent Sunday morning praying for abuse victims at a shrine in Knock, Ireland, also goes after a broad array of current and past Vatican officials and U.S. prelates. He names all of them.

He said his predecessors in the Vatican’s embassy in Washington, now all deceased, knew about McCarrick’s alleged relationships with seminarians and priests and had reported it to the Vatican, but that successive secretaries of state — Angelo Sodano, Bertone and Pietro Parolin — did nothing. Viganò said that he had personally met with McCarrick to remind him that he was under sanction during their first meeting after he arrived in the United States.

“The cardinal, muttering in a barely comprehensible way, admitted that he had perhaps made the mistake of sleeping in the same bed with some seminarians at his beach house,” he writes.

After bumping into McCarrick at the pope’s residence in the Vatican, and listening to the American boast about his freedom to travel, Viganò wrote, he contacted Parolin, the secretary of state and top adviser to Francis, in April 2014 inquiring whether the sanctions were still in force.

He said neither Parolin nor a host of other Vatican officials had replied, but that when he had brought up the subject with McCarrick’s replacement in Washington, Cardinal Donald Wuerl, “it was immediately clear to me that he was fully aware of it.”

Ed McFadden, a spokesman for Wuerl, disputed that account Sunday. “In spite of what Archbishop Viganó's memo indicates, Cardinal Wuerl did not receive any documentation or information during his time in Washington regarding any actions taken against Archbishop McCarrick,” McFadden said.

Some survivors of clerical abuse called the allegations a distraction.

“This is infighting between curia factions that are exploiting the abuse crisis and victims of clergy sexual abuse as leverage in the struggle for church power,” said Peter Isely, a survivor. “The sexual abuse crisis is not about whether a bishop is a liberal or a conservative. It is about protecting children.”

The controversy over the allegations is expected to grow in coming days, especially as Francis has declined to deny it.

Instead on Sunday’s flight, he blamed the media for promoting an “atmosphere of guilt” around suspected clerics and shared that until his visit he “had never heard” about Ireland’s notorious mother and baby homes, where children were ripped away from unwed mothers.

He also sought to strike the same conciliatory tone that hundreds of thousands of faithful heard earlier in the day as he began a Mass at Phoenix Park in Dublin by explicitly asking forgiveness for the church’s sins and abuse.

“Some members of the hierarchy didn’t own up to these painful situations,” he said at the Mass. “And kept silent.”