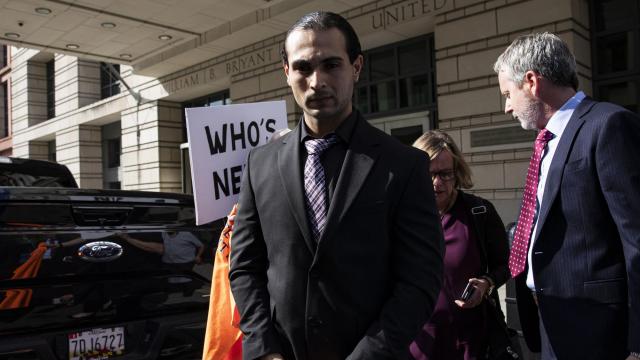 WASHINGTON — A 28-year-old California man was sentenced to six months in prison on Wednesday for selling bank account information that helped Russia wage a social media campaign aimed at influencing and disrupting the 2016 presidential race.

The man, Richard Pinedo, was the third defendant to be sentenced in the investigation of the special counsel, Robert Mueller, into Russia’s election interference and whether any Trump associates conspired. He was also ordered to serve six months of home detention after his time in prison.

Pinedo was an unknowing participant in Russia’s scheme to use Facebook and other social media platforms to exploit political divisions among American voters and swing the election in favor of President Donald Trump. The Russians, whose bogus Facebook pages reached hundreds of millions of Americans, paid at least some of their expenses through PayPal accounts that were set up using stolen bank account information from Pinedo.

Pinedo pleaded guilty in February to one count of identity fraud and provided evidence that figured in the indictment of 13 Russians and three Russian companies. But while prosecutors acknowledged that his assistance saved them time, they refused to ask the judge to lighten his sentence because of it. Sentencing guidelines recommend a 12- to 18-month prison term for his crime.

Lawrence Atkinson, a prosecutor on Mueller’s team, told the judge that Pinedo did not substantially advance their inquiry because investigators had already identified his Russian customers by the time they confronted him. Jeremy I. Lessem, Pinedo’s lawyer, said afterward that he was disappointed that prosecutors made no plea for leniency given Pinedo’s cooperation.

“This is a difficult pill for him to swallow,” he said. “Any custody at all was more than we were hoping for.”

Pinedo’s sentencing before Judge Dabney Friedrich in U.S. District Court in Washington came amid signs that Mueller could be wrapping up some aspects of his investigation, even as prosecutors continue to debrief potentially key witnesses and summon others before the grand jury. The inquiry has been so opaque that it is impossible to assess what stage it has reached overall.

Last month, George Papadopoulos, a former Trump campaign adviser who pleaded guilty a year ago, was sentenced to two weeks in custody for lying to federal investigators. He had last met with prosecutors in December.

Three weeks ago, prosecutors scheduled the sentencing of Michael T. Flynn, Trump’s former national security adviser, who pleaded guilty in December to the same offense of lying to the FBI. Citing the continuing investigation, prosecutors delayed his sentencing four times before scheduling it for late November.

Two prosecutors who worked on the investigation and prosecution of Paul Manafort are returning to their former divisions at the Justice Department, although at least one will remain engaged in matters under Mueller’s purview. A third relatively junior prosecutor left in July. Manafort, Trump’s former campaign chairman who was convicted of multiple counts of fraud in August and then pleaded guilty to conspiracy charges, is cooperating with the special counsel’s office.

Mueller has referred several investigations and prosecutions to local offices of U.S. attorneys, either because they were outside his mandate or because the cases could drag on for years. The most recent court filings indicate the U.S. attorney for the District of Columbia, for instance, is now taking the lead in prosecuting the Russian individuals and companies charged in the scheme in which Pinedo became ensnared. Atkinson hinted to Friedrich that the special counsel’s office might have turned over some leads provided by Pinedo to federal prosecutors with “a wider bandwidth” to investigate them.

Though Pinedo understood he was acting as a middleman for foreigners, Lessem argued in court papers that “never in his wildest dreams could he have foreseen that providing bank account information to set up PayPal accounts could be used to interfere with a presidential election.”

He told the judge that because of the investigation’s high profile, his client was a target of threats and harassment, a punishment in itself. Pinedo said some people have accused him of being a Russian agent while others have delivered veiled threats of retaliation for his testimony against Russian operatives. “Just leaving my home to run errands is extremely stressful,” he told the judge.

Friedrich said that while Pinedo deserved credit for his cooperation and sympathy for the harassment he and his family had endured, he had engaged in identify fraud on a large scale for a period of three years. “You committed a serious crime,” she said, “with real consequences.”

According to court papers, Pinedo earned $40,000 to $95,000 enabling the Russians and others to bypass safeguards and gain access to online financial networks.

He opened some bank accounts in his own name and worked with third parties to come with other account numbers, then sold that information to his customers. When PayPal posted trial deposits into those accounts as a security measure, he emailed that information to his customers so their accounts could be verified. So far, those convicted of crimes as a result of Mueller’s inquiry have received minimal sentences. The third defendant who has been sentenced, Alex van der Zwaan, a lawyer living in London, was sentenced in April to 30 days in prison for lying to FBI agents about his work for Manafort.

But Manafort faces a lengthy prison term and is forfeiting almost all of his wealth. Rick Gates, the Trump campaign’s deputy chairman who pleaded guilty to two felony charges this year, is also awaiting a sentencing date.