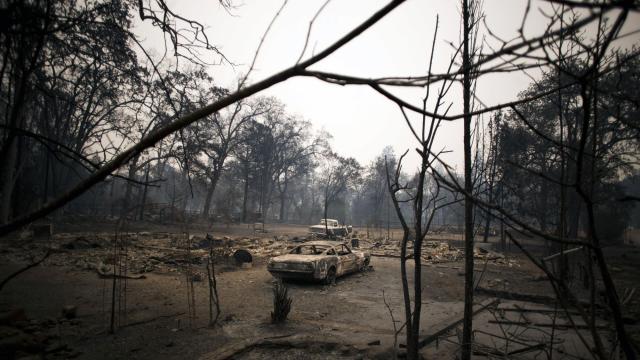 PARADISE, Calif. — The inferno that ravaged the wooded town of Paradise in Northern California became the deadliest wildfire in the state’s modern history on Monday when officials said they had discovered the remains of 13 more people, bringing the death toll to 42.

The Butte County sheriff, Kory L. Honea, has said more than 200 people remain missing in and around the town, which sits in the foothills of the Sierra Nevada and was popular with retirees.

The fire, which continues to rage in the hills and ravines east of the city of Chico, is also the most destructive fire in California history, with more than 6,475 structures destroyed, most of them homes.

Fires whipped by strong winds were raging through thousands of acres of forests and chaparral in both Northern and Southern California on Monday, having already wiped out a town in the Sierra Nevada and forced the evacuation of tens of thousands of residents west of Los Angeles.

President Donald Trump on Monday evening said on Twitter that he had approved a request to declare the fires in California a major disaster, making people affected eligible for various types of federal government support.

The Camp Fire, which decimated Paradise, has already burned about 113,000 acres and is only about 25 percent contained.

An estimated 370 structures have been destroyed in the Woolsey Fire west of Los Angeles, up from the 177 figure provided on Sunday night. Another 57,000 structures are believed to be under threat. Two people have died in that fire, which is 20 percent contained and has charred more than 90,000 acres in communities like Malibu and Thousand Oaks.

Another blaze that has torn through 4,500 acres in Ventura County, the Hill Fire, was 80 percent contained.

A Concern Over Whether Paradise Can Rebuild

While the Woolsey Fire chased residents from one of the wealthiest ZIP codes of California, near Malibu, the Camp Fire hit a low-income retirement community in Paradise. Some residents now wonder how — or if — it will be rebuilt.

“It had no real economy,” James Hana said of Paradise, where he has lived since 2002. The town was a haven for residents who were elderly or retired, many of them in mobile homes. A quarter of its residents were over 65, according to census data from 2017. Fourteen percent of the population was below the poverty line. “What are they going to do?” Hana said. “They’re not going to rebuild.”

Residents say Paradise began as a mining and lumber town but those industries dried up long ago. The few people employed in town mostly work at local businesses, like restaurants and auto body shops. He makes roughly $25,000 a year as a handyman, he said, enough to get by in Paradise. The median value of a house in Paradise was around $250,000, less than half the California median of $544,000, according to Zillow, the real estate data company.

Hana sat outside the Neighborhood Church in Chico, a makeshift shelter for displaced residents, wearing donated pajama pants and running shoes. His long beard was segmented with black elastic bands. He lost his home, motorcycle and nearly all of his other belongings. He escaped with his truck, a few bags of tools and his two dogs: Roxy, a Doberman pinscher, and Winter, a German shepherd.

He was worried about the state of his home’s insurance because of a divorce, and he said he did not know when he would be able to get back to work or what he would do until then.

“But I’m really concerned about what’s really going to happen with the town,” he said. “It’ll never come back to what it was.”

Gene McAnelly and Gary Brand, two 70-year-old friends in wheelchairs who said they both rely on Social Security checks to survive, both lost their homes in the fire. But they both are confident they will return, they’re just not sure how yet. “Just give me a tent,” McAnelly said. “I’ll camp out.”

A Forecast of Strong Winds, No Rain and Low Humidity

Firefighters in California can expect little help from the weather over the next few days.

Conditions are forecast to worsen in Southern California, where the Woolsey and Hill fires are raging. Much of that region will face critical fire weather conditions through Tuesday afternoon, according to the National Weather Service, with low relative humidity, no rain and a high-wind warning in effect for the mountains.

“It just seems to be a story about winds,” said Bonnie Bartling, a weather specialist at the Los Angeles/Oxnard Weather Forecast Office. The strong winds propelled a new brush fire in Simi Valley on Monday morning, which quickly spread to cover about 105 acres before firefighters brought in under control.

“It just hits home on the fact that we are still in significant fire weather and the existing fire is not our only concern,” Chief Mark Lorenzen of the Ventura County Fire Department said.

While winds are slowing over the Camp Fire in Northern California, the low humidity there means the trees, brush and foliage that can fuel the fire remain dry. No rain is expected this week and there’s only a small chance of some early the following week.

“We’re keeping our fingers crossed for it,” said Cory Mueller, a meteorologist in the National Weather Service’s Sacramento office.

Wishing for Hope in Thousand Oaks

Blackened hills surrounded the 101 freeway and encircled the city of Thousand Oaks on Monday morning, the first time since the shooting at Borderline Bar & Grill that the city approached anything resembling normalcy. The wind had stayed calm through the weekend, giving firefighters the chance to make progress on the Woolsey Fire after it burned through more than 91,000 acres. But the Santa Ana winds are expected to pick up again on Monday, which could easily mean more embers blowing through the canyons.

Several residents had stopped at a gas station in Calabasas on their way home, said Rashid Stevens, who said he saw cars packed to the brim come through early Monday morning.

“We’re all hoping it calms down here, finally,” he said. “They deserve that at least.” A Possible Cause of the Camp Fire

It’s still not certain what caused the most destructive wildfire in California history, but eyes are turning toward an all too familiar suspect — one of the state’s investor-owned utilities.

Many fires in recent years have been caused by downed power lines. Pacific Gas and Electric Co., which has been blamed for billions of dollars in past fire damage, experienced an outage in Butte County about 15 minutes before the Camp Fire started on Thursday and also reported a damaged transmission tower in the area, according to report filed to state regulators. Officials said they were still investigating the causes of the current fires.

Southern California Edison also submitted a preliminary report to state regulators regarding the Woolsey Fire in Ventura County, citing an incident near its Chatsworth Substation minutes before the blaze was reported.

Earlier this year, the Department of Forestry and Fire Protection, known as Cal Fire, determined that power lines and poles and other equipment owned by Pacific Gas and Electric was responsible for a dozen fires in Northern California in October 2017 that devastated wine country.

Paul Doherty, a spokesman for PG&E, said the cause of the fire remains under investigation.

And Edison advised its investors last month that its equipment may have been a source of the Thomas Fire last year in Ventura and Santa Barbara counties. San Diego Gas and Electric Co. has also been the subject of wildfire investigations.

In September, California lawmakers passed a measure aimed at protecting against future fires. The legislation, Senate Bill 901, also protects PG&E from liability for such fires by enabling the utility to pass costs on to ratepayers.

Consumer advocates called the bill a bailout and criticized lawmakers for failing to ensure that the power companies fulfilled their responsibilities in maintaining their equipment.

After the bill passed, Moody’s Investors Service downgraded the ratings of the three power companies because concern about utilities’ liability related to wildfires. On Monday, Moody’s said the new wildfires highlighted “severe credit risk for PG&E.”