Buying to Last: Back to a Bygone Era 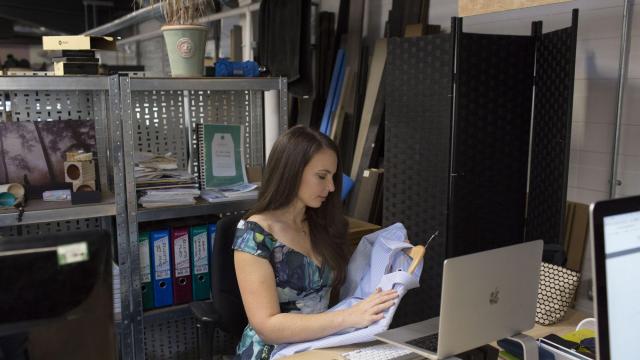 When Justin Galimore was growing up in rural Georgia, there was no garbage collection on his family’s dirt road.

“Every two weeks, we would load up the pickup truck with trash, and throw it into a landfill,” he recalls. “Watching the bulldozer drive over it, there was nothing magical about waste disposal. It was just going to sit in the ground for the rest of your life — or the foreseeable future.”

Still, his family would buy, then discard, goods without a second thought. “It’s a farming community, a very conservative area, where people don’t think about how long a product will last before they have to buy another one,” he said. “I don’t remember anyone talking about recycling until I moved to Colorado.”

Now 32, living in Berthoud, Colorado, and working in the internet technology field, Galimore has changed how he thinks about what he buys. Conserve, reuse, recycle: It’s a constant refrain among his neighbors and one he has taken to heart. Mindful of those mounds of landfill back home, Galimore has made a particular effort to buy higher-quality products; better, he reasons, to invest in something built to last, or at least be repaired.

Take his favorite socks, from Darn Tough, a Vermont company. Made from moisture-wicking, extra-dense merino wool, one pair costs $20. “But they come with a lifetime guarantee,” he marveled. “I normally burn through socks, but I’ve put 200 miles on these.”

The idea of buying goods that last isn’t new, of course. It was what consumers did in earlier generations. But the notion of lasting value appears to be resonating these days with young, value-conscious, environmentally aware buyers who are rebelling against the proliferation of cheap, disposable goods or the planned obsolescence built into many products.

One company that has caught on to this trend is BuyMeOnce (www.buymeonce.com).

The 2-year-old website was founded by Tara Button, 36, of London, with a simple mission: helping us buy fewer, better things. Think of her company as a nudging reminder that heirloom was once more than just a flattering description for a tomato.

“We want to change the way the world shops, from short-term to long-term buying,” she explained by phone from her British headquarters. “Long-lasting products save the planet and save money — people seem to have lost sight of that.”

It was a birthday gift that led to the idea for her company: a pan by the French cookware company Le Creuset, which famously offers a lifetime warranty on its products. Button was smitten, and began searching for other companies with similar guarantees.

“I wanted everything in my life to feel like this: an investment that I knew I would never have to rebuy.” Startled that there was no comprehensive resource to steer such shopping choices, she decided to start one, jettisoning a dead-end job in advertising for this passion project.

From the outset, Button used simple criteria to assess whether to add a company to the site — including durability, ethical production and exceptional aftercare — as well as checking to see if customers’ online reviews buttressed companies’ claims.

“It’s like panning for gold,” she explained of the process. “Brands start to fizz their way to the top.”

One such standout is Minnesota’s own Duluth Pack, a 135-year-old canvas and leather bag company that still offers a lifetime guarantee and repairs for no or a nominal fee. Compare that with the startup Swedish Stockings, which focuses on sustainable hosiery: If you mail old pantyhose to the startup so it can recycle them, rather than consign them to a landfill, Swedish Stockings will provide a discount code to buy a pair of its own, long-lasting hose.

Durability isn’t the driving appeal of Davek umbrellas, though they’re sturdier than their drugstore counterparts and come with a lifetime warranty.

Rather, Button selected their products for BuyMeOnce because of the inventive ways Davek responds to the commonest problem: losing that umbrella.

Its Loss Alert technology pairs with a smartphone app, and will send a message if the owner moves more than 30 feet away; if even that fails, Davek extends a 50 percent discount on replacements.

There are alternatives to fast fashion, too, like Marie Hell, a New York City-based womenswear label. Button worked with the company to devise a mechanism by which it could encourage customers to fix their clothing rather than throw it away: send a smartphone snap of the damage to the designer, and it will pay $30 toward any repairs undertaken by a tailor near the customer — far easier and more resource-neutral than mailing it back.

Eileen Mandel of Marie Hell says that BuyMeOnce now makes up 30 percent of its international sales. “No one — that’s right, no one — has cashed in a voucher,” she said. “We knew we could offer this unheard-of bonus because we have 100 percent confidence in our product.”

While most of the company’s business is online and through affiliate links, she has also used brick-and-mortar pop-up stores. And she is starting a Good Housekeeping-style certification that brands can use to advertise their sustainable credentials.

For buyers who like to measure the impact of their purchases, she will soon add a price-per-use calculator to the site, which she believes will help people better see how costs amortize over time. The shift in shopping from investment to convenience occurred in the postwar period, according to Tim Cooper, a professor at Nottingham Trent University in Britain and editor of “Longer Lasting Products.”

The development of cheap new plastics in the 1950s gave birth to a new consumerist mindset. “It changed from a society where products were purchased on the basis they would last as long as possible, to a world where things are replaced as frequently as possible,” he explained. The invention of market-based pricing in the 1980s had an impact, too: Retail prices were unmoored from production costs for the first time, and instead were decided according to what a customer might reasonably pay — breaking the age-old link between cost and quality.

Planned obsolescence was a natural next step, in which products are designed without possibility of repair or to fail after a certain period — Cooper cites printers in particular, which he says will often be programmed to produce a limited number of copies and so curtail their life span. No wonder electronics remain one of the toughest categories for Button and her team.

He’s glad that products he’s found through the site have sustainable bona fides, but it’s pure economics that have made him an evangelist; one of his favorite purchases was an Elvis & Kresse messenger bag, which is made from upcycled hoses decommissioned by the British fire brigade.

“Rather than buy a cheap product 10 times a year, it makes more sense to buy one that will last much longer — you can’t beat an investment that comes with a lifetime guarantee,” he said.

Every such purchase can contribute to a shift away from that postwar manufacturing mindset. “If more people start buying durable, long-lasting products,” Latchu said, “eventually producers will have to shift to making things that last longer.”