Buttigieg eyes more mask restrictions on 'all modes of transportation' 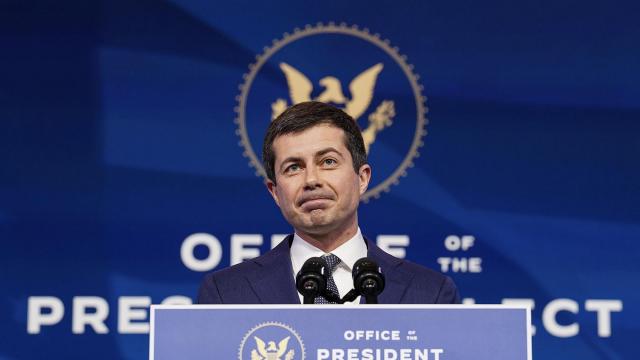 CNN — Transportation Secretary nominee Pete Buttigieg said Thursday that the Biden administration will look at "all relevant authorities" at its disposal toward a federal mask mandate on all forms of transportation, part of his confirmation hearing that could put the former South Bend, Indiana, mayor on the path to becoming the first Senate-confirmed LGBTQ Cabinet secretary.

"We are prepared to make sure that we use all relevant authorities to enforce the President's executive order to ensure that across all modes of transportation, workers, passengers, commuters are protected," Buttigieg told Democratic Sen. Ed Markey of Massachusetts during his confirmation hearing before the Senate's Commerce, Science and Transportation Committee.

Buttigieg, who gained national attention during his upstart presidential campaign, is also expected to play a central role in President Joe Biden's push for a bipartisan infrastructure package. During the campaign, Biden proposed spending $1.3 trillion over 10 years to build schools, roads, bridges, railroads and pipes, expand broadband access and usher in a "100% clean energy economy."

"We need to build our economy back, better than ever," Buttigieg said. "The Department of Transportation can play a central role in this, by implementing President Biden's infrastructure vision creating millions of good-paying jobs, revitalizing communities that have been left behind, enabling American small businesses, workers, families and farmers to compete and win in the global economy, and tackling the climate crisis."

Buttigieg often spoke about infrastructure on the campaign trail from the perspective of a small-town mayor, arguing that local governments like the one he once ran needed people in Washington who understood their needs and issues.

Buttigieg said in his nomination hearing that he would also work to implement reforms to prevent disasters like the Boeing 737 Max crashes, and is willing to make personnel changes, including at the Federal Aviation Administration, where some top-ranking positions are currently vacant.

"Engineers and the FAA should be in the driver's seat," said Buttigieg.

Some top Democrats believed that Biden wanted to get Buttigieg, 39, a top post as a way to elevate a rising star in the Democratic Party. Buttigieg's future aspirations are no secret, but the former mayor's political future in his conservative home state has long been a roadblock.

Buttigieg served as South Bend mayor from 2012 to 2020, and served as an intelligence officer in the US Navy Reserves for six years. He was deployed for six months to Afghanistan in 2014.

After he returned, Buttigieg came out as gay in a 2015 essay for the South Bend Tribune. Later that year, then-Mayor Buttigieg won reelection.

Buttigieg often spoke about being gay during his bid for the 2020 Democratic presidential nomination, and for many LGBTQ Americans, he became a symbol of progress. His marriage to Chasten Buttigieg and presidential campaign normalized being gay and married in presidential politics.

"I'm proud to have him by my side, and I want to thank him for his many sacrifices and his support in making it possible for me to pursue public service," said Buttigieg of his husband.

While the Senate is now controlled by Democrats, the nomination hearing before the committee is chaired by Sen. Roger Wicker, a Mississippi Republican, because Senate Republican Leader Mitch McConnell and Senate Democratic Leader Chuck Schumer have not yet reached a deal on how to share power in a 50-50 Senate.

That agreement will not only determine the number of seats that each party holds on Senate committees, but also will give Democrats the power to rule them. Until then, the Senate will operate under the rules of the last Congress, when the GOP led the Senate.