Tarboro, N.C. — More than 100 people in Nash and Edgecombe counties received an unwelcome holiday gift: an email saying jobs they were hired for will not materialize.

No one seems to know what happened to a call center planned for downtown Tarboro, and the woman behind the venture has apparently left town.

A ribbon-cutting with local officials was held Sept. 20 for the call center, which was supposed to employ 200 people. Three months later, the door is still locked, the lights are out and the people who were supposed to be working at the center said they feel like they got scammed.

"It really put us in a really, really bad predicament," said Laquinta Epps, who quit her old job once she landed a better-paying job as a team leader at the call center.

"She told us to go ahead and put in our two-week notice for the jobs we were currently at because we definitely had a job with her," Epps said Tuesday.

"It was a huge, huge increase on my income, so I was ready and excited," said Ashley White, who was hired to do medical billing for the operation. "Then, the more email I got, the more I just got devastated."

"I’m like, 'What? Why? What happened?' [There was] no explanation, no nothing," White said.

She and other workers weren't able to get any update for weeks from Stephanie Braswell, the chief executive of the call center's operator, on the plans for the center. Last week, the employees learned the job offers were rescinded. 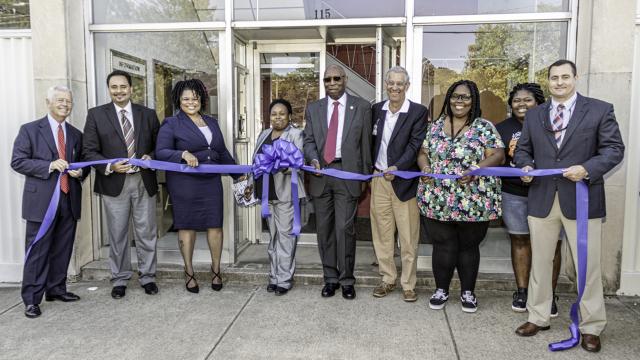 Epps and White both gave up secure, full-time jobs with benefits for what turned out to be empty promises.

"I was expecting to have a better opportunity here close to home, and now I don’t have anything," said Epps, who has two children.

"You’re messing with people’s livelihoods," she added. "It’s a real-life situation, so it’s really hard for us to have to deal with this right here at the holiday season."

White said she started a Facebook group for other former employees. She said some actually did start working for Braswell, but they said they never got paid.

Braswell didn't respond Tuesday to requests for comment, and her house in Rocky Mount appears to be vacant.

Economic development officials said she didn't receive any state or local incentives to open the call center. They said she wanted to rush the ribbon-cutting to meet a contract deadline, but she then backed out of buying the Tarboro building.

Braswell still has Social Security numbers, dates of birth and banking information for more than 100 people who had applied for jobs.

Epps wants to know what her would-be boss plans to do with the personal information.

"What’s going on? What did you do with the money? Why didn’t you open the company? What do you plan to do to make this right for all the people whose lives you’ve affected?" she said.

The state Attorney General's Office is reviewing six complaints about Braswell and her company, NBSF Consulting.

The state Division of Workforce Solutions plans to send its NCWorks mobile unit to Tarboro on Jan. 3 to help people affected by the situation, Commerce Department spokesman Andrew Beal said Wednesday. The unit will set up in the parking lot of the Edgecombe County Administration Building, at 201 St. Andrew St. in Tarboro, from 10 a.m. to 3 p.m. that day. People can call the NCWorks office in Wilson at 252-234-1129 for more information.