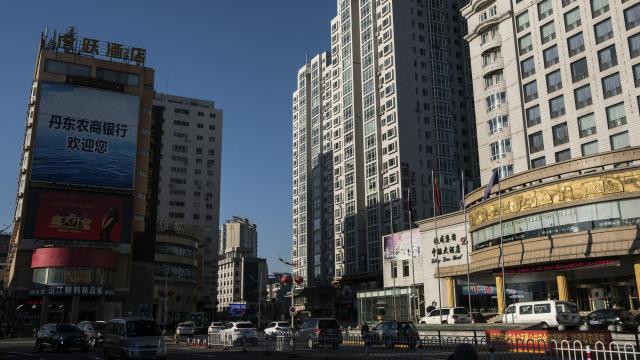 DANDONG, China — Not long ago, Ma Xiaohong was the public face of China’s trade with North Korea.

By age 44, she had built a commercial empire accounting for a fifth of trade between the communist neighbors. She was appointed to the provincial People’s Congress, granted special privileges to export petroleum products to the North and feted by officials as a “woman of distinction.”

Last year, U.S. prosecutors indicted Ma on charges of using her companies to help North Korea evade international sanctions. After a briefing by U.S. diplomats in Beijing, the Chinese announced their own investigation into Ma’s main company.

Fifteen months later, however, it is unclear what has become of Ma. The government says it has not found evidence to support the U.S. charges that she or her partners aided North Korea’s weapons program. Although she remains under investigation for “economic crimes,” it is not clear whether she was ever arrested or where she is now.

A review of Ma’s case — involving interviews with officials, diplomats and others, as well as searches in corporate registries — underscored China’s deep ambivalence as it has come under increasing pressure to enforce sanctions against North Korea. While China is on the record opposing the North’s pursuit of nuclear weapons, it is wary of being seen imposing punishments at the bidding of the United States, especially against its own citizens.

North Korea’s agreement Tuesday to send athletes to the Winter Olympics in South Korea next month, and to hold talks and other exchanges with the South, may have been symbolic and perhaps a cynical effort to buy time. Yet it suggested that the rising diplomatic and economic pressure, meant to deny it the financial and material resources needed to develop nuclear weapons and ballistic missiles, may have had some effect on the North’s leader, Kim Jong Un.

Kim has given no signal that he would give up his nuclear ambitions, but after the North’s initial overtures, Trump wrote on Twitter that the talks were evidence that “sanctions and ‘other’ pressures are beginning to have a big impact on North Korea.”

China has shown a willingness to support tougher sanctions at the U.N. Security Council over the past year, but it has done so grudgingly. The reasons for that are historical and strategic. North Korea has long counted on China as its only real ally, for example, but some analysts argue that economic factors also play a part.

“The Chinese don’t want to have to be doing this,” said Ken E. Gause, an expert on North Korea with CNA, a research organization in Arlington, Virginia. “There’s a lot of money to be made on that border, and there are a lot of connections between the operators on the border and their patrons back in Beijing.”

Ma’s fate remains shrouded in mystery. There have been rumors of political intrigues and of sweeping arrests of customs officials, but few hard facts.

China has taken steps to shut down at least some of Ma’s trading empire, freezing her shares of her main company, Dandong Hongxiang Industrial Development Co. Ltd., for example, according to a government registry. The shares of three colleagues who were also charged by the United States were frozen for a time but later released, suggesting they no longer face criminal charges.

In the government’s first statement on the case in a year, the State Council Information Office responded to questions from The New York Times by saying that Ma and others face investigation for “economic crimes.”

However, the statement went on to say, referring to Ma’s main company, that investigators “have not yet found evidence that the Dandong Hongxiang company and Ma Xiaohong et al are directly involved in North Korea’s nuclear missile development activities.”

The company’s headquarters in Dandong, on the border with North Korea, has been shuttered since last spring, when the decorations for the Year of the Rooster that are still hanging on the entrance were put up for good luck.

Ma is still listed as the deputy chair of the consortium between Dandong Hongxiang and the North Korea Liujing Economic Exchange Group. After reporters from The New York Times visited and made inquiries about Ma’s businesses, however, the hotel restaurant closed. That appeared to be in keeping with the latest round of sanctions, adopted by the Security Council in December.

China joined the council’s other 14 members in imposing the new sanctions, which would also severely limit shipments of refined petroleum. Chinese officials point to such steps as a demonstration of its commitment to halting North Korea’s weapons program.

China has already slashed imports of coal, silver and other commodities from North Korea, according to customs records. While North Korea continued to sell $270 million worth of prohibited goods in the six months that ended in August, according to the latest U.N. report on sanctions, trade along the border has witnessed a significant drop, distressing traders and plunging the region into recession.

The once-thriving trade across the border was what fueled Ma’s rise, and the throttling of it now seems to have contributed to her fall. She was only 24 when North Korea, suffering the effects of famine, began to open its economy, first by allowing the export of scrap metal in 1996. What began as a trickle became a flood, she told Southern Weekly, a prominent Chinese newspaper, as her company bought the scrap to resell in China. “Then, every day we were getting nearly 10,000 tons,” she said.

Ma’s trade expanded to other products and commodities. Soon, she invested in companies inside North Korea, including a clothing plant and a gold mine. The cost of the latter, she said, was the delivery of 80 Steyr trucks built by Sinotruk. In January 2000, she formed Dandong Hongxiang.

By 2010, Ma had built a global conglomerate of companies that accounted for a fifth of all imports and exports between the two countries.

As her businesses prospered, she boasted of close ties with officials on both sides of the border. They reportedly included Jang Song Thaek, the uncle of North Korea’s leader, who was an architect of the economic policies that Ma exploited. In 2013, he was executed for treason, accused of plotting a coup as his nephew consolidated power.

On the Chinese side of the border, Dandong recognized her as one of 10 outstanding women in the city; in 2013, she was selected as a delegate to the provincial People’s Congress, a ceremonial post in an undemocratic country but one that indicated her connections to the political elite.

On the day in 2006 when North Korea carried out its first nuclear test, she said, she happened to be meeting with executives from one of the country’s biggest state companies, who expressed pride in the test. She described North Koreans as educated and worldly despite being so isolated, although her travels also showed her the deprivation many ordinary Koreans face.

“North Korea has computers; it has Coca-Cola,” she told Southern Weekly, “but North Korea is still North Korea.”

Each new round of sanctions disrupted business but then opened up other avenues. In 2009, under President Barack Obama, the United States imposed sanctions on Korea Kwangson Banking Corp., one of North Korea’s most prominent banks, charging it with financing two companies involved in the country’s missile and arms trade.

In the months that followed, according to U.S. prosecutors and independent researchers, Ma’s company opened or acquired subsidiaries and shell companies in Hong Kong and other offshore havens. The purpose, they said, was to trade with the bank and other North Korean entities, as well as to launder money and import prohibited materials used in weapons making.

Dandong Hongxiang added 28 subsidiaries in the two years after the sanctions on Korea Kwangson, according to a report by C4ADS, a research organization in Washington devoted to security issues, and the Sejong Institute in Seoul.

By the end of 2016 — after the U.S. indictment — Ma’s network had expanded to 43 entities on four continents, C4ADS said in a report last month. Some of them, the organization’s research suggested, were involved in selling to North Korea chemicals used in the manufacturing of nuclear bombs or missiles.

China, too, prohibits such exports, but authorities did not move against Dandong Hongxiang until U.S. diplomats briefed them on a secret complaint filed in the New Jersey court in August 2016 that named Ma and three executives in the company.

The Public Security Department in Liaoning, where Dandong is, responded by announcing an investigation, but the government said virtually nothing until the State Council Information Office issued its statement last week. Articles that had initially appeared in state media were later censored, suggesting an effort to minimize attention to the case.

A clue of Ma’s legal woes came in statements by Liaoning Darong Information Technology Co. Ltd., where she was chairwoman of the board from 2013. In November 2016, two months after the Chinese announced their investigation, the company ousted her. In a news release, it explained it had “not been able to contact Ma Xiaohong, nor are her relatives aware of the details of the situation.”

During recent visits to Dandong, few people would discuss Ma. Some companies linked to Dandong Hongxiang continue to function, including a transportation subsidiary occupying an office with an expansive view of the Friendship Bridge that crosses the Yalu River into North Korea. A woman who seemed to be in charge brusquely refused to answer questions.

In late December, another North Korean restaurant continued to operate, as did a gallery nearby selling paintings by North Korean artists. The businesses are registered in Ma’s name, although her husband manages them, according to workers there. “His wife was arrested, but he is fine,” one said.

Ma herself once seemed to foresee the risks of her business. “If there is any change in the political situation,” she told Southern Weekly, “our business can be smashed to pieces.”