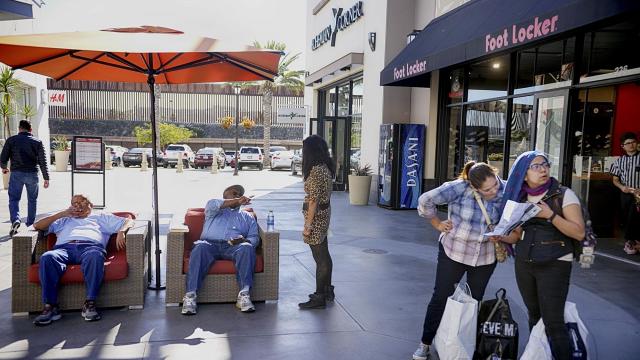 SAN YSIDRO, Calif. — It should have been a bustling Sunday at the sprawling outdoor mall abutting the Mexican border here. The Christmas sales were supposed to pack the parking lot that runs along a barbed wire fence in San Ysidro, one of the busiest border crossings in the world.

But instead of a post-Thanksgiving rush, San Ysidro was a scene of tense chaos over the weekend, with U.S. border agents firing tear gas over the border at hundreds of Central American migrants trying to storm the fence. The border crossing was shut down entirely for more than five hours, and for the first time in the nearly two decades since the Las Americas outlet mall opened, it closed for the day.

The economic impact was deep and immediate in the border area, where retail businesses depend on cross-border traffic — at least 90 percent of retail customers in San Ysidro come from Mexico, according to the local Chamber of Commerce. Sunday’s shutdown meant a loss of an estimated $5.3 million for the 650 businesses in the area, said Jason Wells, the group’s executive director.

“We’re in a critical time of the year for everyone whose livelihood depends on this,” Wells said. “It’s surreal, I would say it’s almost at the point that it’s scary. We now have a military helicopter overhead, you see people running through canals. Meanwhile, people here are simply trying to be responsible and live.”

Nearly all of the more than 20 lanes of traffic at the San Ysidro crossing were open Monday morning. Many of the thousands of people waiting in line were among those who drive across the border daily, monitoring wait times the same way commuters in other parts of the country track freeway traffic and train delays. Monday morning’s traffic was unusually light.

“If people are staying home because they are worried, the economic impact is obviously huge — we have 73 million crossings a year and we know that the region’s $255 billion gross regional product depends on cross-border commerce,” said Jerry Sanders, the former Republican mayor of San Diego who now runs the city’s regional Chamber of Commerce. Around 70,000 vehicles and 20,000 pedestrians cross each day, Sanders said, with roughly one-third of them entering the United States to work.

“If we have an atmosphere where people stop doing business because they can’t come across easily, we are going to have a major problem,” he said.

For weeks now, Sanders and his staff have been alerted when Border Patrol officials briefly shut down the border for practice drills, which he said has allowed local businesses to plan accordingly. But he dismissed President Donald Trump’s threat to shut down the border entirely if necessary to prevent what he has described as an “invasion” of migrants from Central America, many of them families with children, seeking asylum in the United States.

“That’s simply not reasonable and that’s simply not plausible — you’re talking about north of $600 billion in trade,” Sanders said. Already, he said, Sunday’s shutdown “made it real very quickly.”

“There is going to be impact if this happens again,” he said.

The San Ysidro shopping centers were mostly empty again Monday. Employees and regular shoppers at the outlet mall said they assumed it was because of concern over the chaos on Sunday. Black security helicopters flew low over the border area throughout the afternoon again Monday, drowning out the amplified holiday music.

Maria Robledo-Sanchez, 50, said she had been trying to return home to the United States from Mexico on Sunday when she noticed foot traffic at the port of entry suddenly grind to a halt, creating a long line. Soon a heavy contingent of law enforcement officers gathered, she said, and she heard loud booms nearby and what looked like smoke rising. Later, she learned it was tear gas fired at migrants who had tried to storm the border fence.

“It was chaos. It was chaos,” she said, growing tearful. “It wasn’t until much later I realized what was happening.”

Robledo-Sanchez, who was born in Mexico but has lived in the United States for decades, crosses into Tijuana several times a week to visit family and go shopping. It normally takes her about 10 minutes to get through the crossing as an American citizen, she said, but on Sunday, it took about five hours.

Sunil Gakhreja, 43, a San Ysidro perfume wholesaler, said his business had seen a sharp downturn in customers since an early contingent from a caravan of migrants first arrived in Tijuana, on the other side of the border, about two weeks ago. Ninety-five percent of his customers, he said, come from Mexico to buy perfumes in bulk to redistribute on the Mexican side of the border. He has seen few new customers in weeks, and his core clients, he said, have been skittish about making the trek across the border.

“There’s a lot of uncertainty and a sense of fear going on,” he said.

Robledo-Sanchez said she was crossing back into Tijuana on Monday to bring several packages of undergarments to some of the Central American migrants whom she had met while she was there. The garments are of better quality and cheaper than what they can buy in Mexico, she said, and she wanted to do what she could to help.

Still, she was bringing some extra money with her — in case the border closed down again. No one, she said, knows what to expect next.