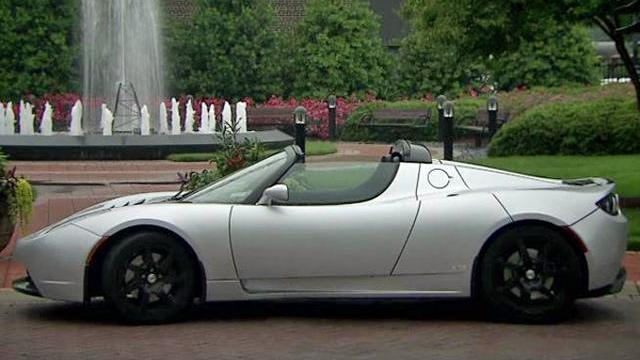 Raleigh, N.C. — There are only eight Tesla Roadster convertibles on the road in North Carolina, but makers of the all-electric sports car think it's the wave of the future.

"It's like the Millennium Falcon," said Tesla product specialist Shaun Phillips, referring to a spaceship in Star Wars. "We're talking about silicon and microprocessors in a car, instead of nuts and bolts."

The Tesla Roadster is the first commercially produced automobile to run on lithium-ion batteries and the first electric vehicle to be able to go more than 200 miles on a single charge.

"This car is based on the concept that lithium-ion batteries can make a real usable electric car," Phillips said.

Phillips said that Roadster drivers get an environmentally friendly vehicle that's still a lot of car.

"This thing is a blast to drive," he said.

The Roadster's 6,831 lithium-battery ion engine can produce up to 288 horsepower, go up to 125 mph and propel the car from 0 to 60 mph in 3.9 seconds. Its body is made of handcrafted carbon fiber, and the car runs quietly.

Some Triangle residents seemed a little skeptical about the price tag.

"I think that no matter what it was, I wouldn't pay $100,000 for a vehicle," said Jon Bossick, who describes himself as a frugal environmentalist.

Phillips said he believes that once people learn more about the Tesla Roadster, it and the Triangle will be a good fit.

"The Research Triangle is great for technology. There are highly educated individuals, and we have plenty of people who can afford it," he said. "A lot of people know about it, but not a lot of people are well educated about it."

Tesla plans to come out with an electric sedan costing half the price of the Roadster in 2012.