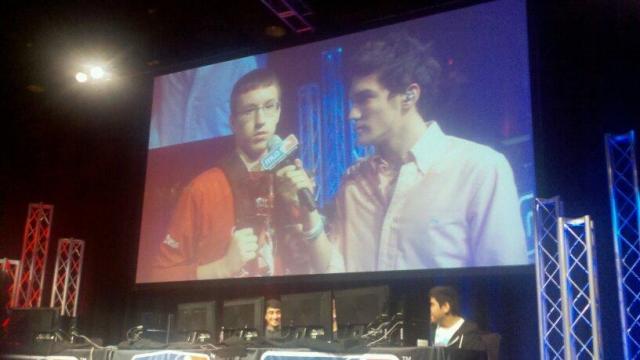 Raleigh, N.C. — Even as a storm raged outside, professional videogamer players, wannabes and fans created their own virtual combat zone inside the safety of the Raleigh Convention Center for a second day of shoot-em up competition in the Major League Gaming tournament.

Today, the shooters that have survived thus far advance to the final rounds with $120,000 in prize money at stake.

One of the contenders has a strong North Carolina connection.

Patrick “Aches” Price, who hails from Sanford, leads the team Quantic Leverage in the “Call of Duty: Black Ops” competition.

“If we come back from the loser’s bracket, we are going to win this tournament,” Aches predicted after one showdown on Saturday.

After enduring some trash talk from one opponent known as Pwnstar on the team Twisted Method who declared he and his team were too good, Aches declared: “We aren’t going to lose to Twisted Method man, Come on!”

Quantic Leverage prevailed and today shoots for a first-place prize of $10,000.

Other games being played during MLG pro circuit’s second annual visit to Raleigh include “Starcraft 2,” “Halo: Reach” and “League of Legends.”

Finals get underway at 10 a.m. with League of legends. Halo: Reach and Black Ops start at 4:30 p.m. Starcraft 2 will close the tournament at 7 p.m.