Bush Made Willie Horton an Issue, and for African-Americans, the Scars Are Still Fresh 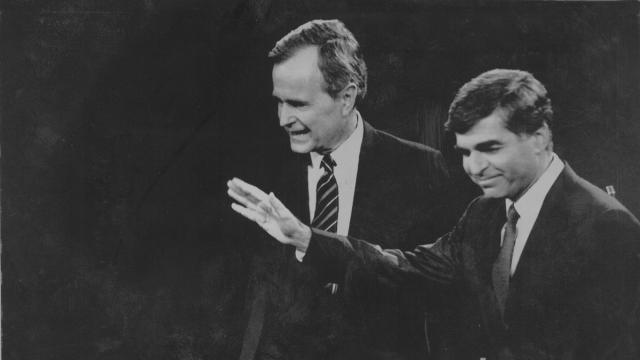 WASHINGTON — The tributes to former President George H.W. Bush in recent days have focused on his essential decency and civility, and his embrace of others, including even his onetime opponents. But the “last gentleman,” as he has been called, was not always so gentle.

Bush’s successful campaign for the presidency in 1988 was marked in part by the racially charged politics of crime that continues to reverberate to this day. The Willie Horton episode and the political advertising that came to epitomize it remain among the most controversial chapters in modern politics, a precursor to campaigns to come and a decisive force that influenced criminal justice policy for decades.

Horton was an African-American prisoner in Massachusetts who, while released on a furlough program, raped a white Maryland woman and bound and stabbed her boyfriend. Bush’s campaign and supporters cited the case as evidence that his Democratic opponent, Gov. Michael S. Dukakis of Massachusetts, was insufficiently tough on crime.

To many African-American people, the scars from that campaign attack remain fresh. Whatever Bush’s intentions, they said, the campaign encouraged more race-based politics and put Democrats on the defensive, forcing them to prove themselves on crime at the expense of a generation of African-American men and women who were locked up under tougher sentencing laws championed by President Bill Clinton, among others.

“The reason why the Willie Horton ad is so important in the political landscape — it wasn’t just about a racist ad that misrepresented the furlough process,” said Marcia Chatelain, a Georgetown University professor of African-American history who teaches a class on race and racism in the White House. “But it also taught the Democrats that in order to win elections, they have to mirror some of the racially inflected language of tough on crime.”

Michael Nelson, an editor of a book of essays on the Bush presidency called “41,” said the Horton episode led to far more overt plays to race in American politics, all the way up to President Donald Trump. “In some ways, the Willie Horton ad is the 1.0 version of Trump’s relentless tweets and comments about African-Americans,” he said.

The wisdom of the Massachusetts furlough program was open to debate aside from race. Releasing nonviolent offenders on weekends to help ease re-entry into society was the goal, but freeing violent convicts raised questions about security, and such release programs have receded in the decades since 1988.

“What crossed the line was not that he was raising the issue of crime itself because crime was a big issue, and that’s fair game,” said David Greenberg, a Rutgers University professor and the author of “Republic of Spin,” about political messaging. “But to use the image of this threatening black man — people call it a dog whistle; it was a pretty clear whistle.”

The fear of Willie Horton continues to haunt politicians today. When President Barack Obama was trying to forge a bipartisan coalition to overhaul the criminal justice system to ease sentencing laws that many in both parties believe went too far, some lawmakers worried that any change that resulted in the release of someone who would then go on to commit another violent crime could be political suicide.

Bush expressed no regret for the Horton ad, and some of his longtime allies have long argued that he got a bad rap for something that was not really of his making. Al Gore, then a senator from Tennessee, was the first to try to wrap the Horton case around Dukakis’ neck during the Democratic primaries that year.

By summer, Bush picked up the theme, citing the case during speeches, and by fall, his campaign began airing an ad attacking the Massachusetts furlough program, showing a series of prisoners walking through a revolving door. But that Bush campaign ad did not mention Horton.

The one that would be remembered for years to come was produced not by the Bush campaign but by an operative named Larry McCarthy working for an ostensibly independent group called the National Security Political Action Committee. The ad, called “Weekend Passes,” singled out Horton, showing a picture of his scowling face as the narrator described his torture of the Maryland couple. In the end, it was shown only briefly on cable television, but its effect was magnified by repeated coverage on television newscasts.

When critics called the ad a brazen appeal to racial fears, the Bush campaign distanced itself from the ad and wrote to the committee that aired it asking that it be withdrawn. But Dukakis did not buy the explanation that the committee was independent. “Anybody who believes that believes in the tooth fairy,” he said at one point.

Indeed, Bush’s advisers had been focused on Horton for months. “If I can make Willie Horton a household name, we’ll win the election,” said Lee Atwater, the campaign strategist. He later referred to making Horton “Dukakis’ running mate.” Roger Ailes, another Bush strategist, said, “The only question is whether we depict Willie Horton with a knife in his hand or without it.”

A little more than two years later, when stricken with a cancer that would take his life, Atwater repented the hardball tactics used in 1988. He said he particularly regretted saying he would make Horton into Dukakis’ running mate “because it makes me sound racist, which I am not.”

What was never clear was how involved Bush was in crafting the strategy. But as Josh King, the author of “Off Script,” a book about political stagecraft, and a student of the 1988 race, put it, “He was willing to employ campaign aides who would use the barest of knuckles in pursuit of the goal of humiliating and destroying the opposing candidate.”

Bush’s history with race was complicated. Running for the Senate in 1964 in Texas, he opposed the Civil Rights Act, but later regretted it and sought to make up for it by supporting the Fair Housing Act in defiance of conservative supporters.

As president, he vetoed civil rights legislation on the grounds that it would provide for quotas, but ultimately he signed an updated version of the bill into law. He appointed only the second African-American person ever to serve on the Supreme Court, Clarence Thomas, to replace the first, Thurgood Marshall, but the choice angered African-American leaders on the left who considered Thomas too conservative.

Bush was unfailingly gracious and friendly with everyone, black or white, and gave no indication that it mattered to him. When Obama visited Houston as president in 2014, Bush was there waiting for him on the tarmac to welcome him to town. As it happens, Obama then became one of the last outsiders to see Bush alive last week when he visited him at his Houston home three days before his death.

“He regarded politics and campaigning as just the dirty business,” Nelson said. “Running for office is the price you have to pay for holding office.”