Rockingham, N.C. — A bus driver and a 10-year-old passenger were among the four people who died Saturday when a charter bus carrying a football team from Ramah Jucco Academy in Rock Hill, S.C., crashed on Interstate 74 near Rockingham.

A preliminary investigation by the State Highway Patrol found that the bus's front left tire blew out, sending it swerving into the median guardrail sideswiping a concrete bridge column.

The bus driver, Brian Andre Kirkpatrick, 43, died in the collision along with Devonte Gibson, 21, Tito Hamilton, 19, and Darice Hicks, 10. More than 40 others were injured in the crash.

Gordon said it could take months before investigators reconstruct the accident and finalize their findings.

"The tire debris was prior to the bridge which kind of indicates more that there may have been some type of tire failure which caused it to go left and put it into the median," Gordon said.

Images from the scene showed the side wall of the bus had been almost sheared off, and injured people were lying on the ground. Several passengers were ejected from the bus, according to the State Highway Patrol. 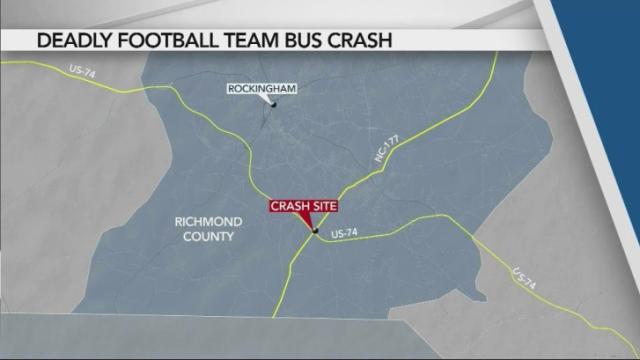 Joe Bernardini, who said he came upon the crash scene minutes after it happened described people jumping from the windows of the bus.

"I got up on the guardrail and was grabbing people and getting them off as fast as i could because everyone was kind of in a panic," he said.

Team support personnel following the bus in other vehicles also rushed to the aid of those on the bus.

The team was traveling to face the University of God's Chosen Disciples in a 3 o'clock game at Fayetteville's Lake Rim Park, according to UGC coach Demetrius Hollingsworth.

Westbound lanes were expected to remain closed indefinitely where the heavily damaged bus ran off the road and into the median. Vehicles were being detoured to the overpass to get around the crash zone.

UPDATE: A photo from the accident on US 74 near Rockingham. pic.twitter.com/bF2WDpAlrf