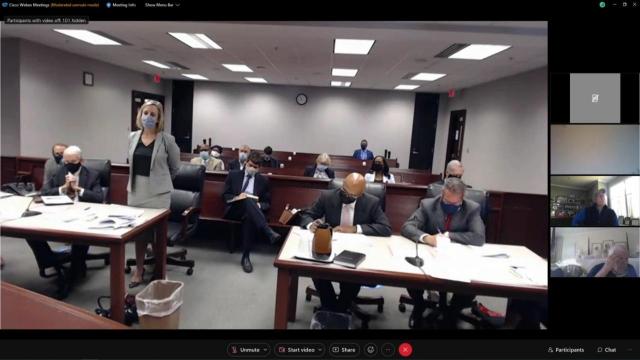 Article 1, Section 15 of the North Carolina Constitution declares:
The people have a right to the privilege of education, and it is the duty of the State to guard and maintain that right.
Article IX, Section 2(1) requires that:
The General Assembly shall provide by taxation and otherwise for a general and uniform system of free public education, which shall be maintained at least nine months in every year wherein equal opportunities shall be provided for all students.

Under our Constitution, the right of our children to free public education with equal opportunities and the obligation of the legislature to provide by taxation for such education is the law of the land.

In 1994, parents, students and 11 school boards sued the state of North Carolina for failing to provide funding for a sound basic education. In 1997, the Supreme Court of North Carolina unanimously concluded the constitution guaranteed a sound public education and instructed the trial court to determine whether the legislature was providing it.

The legislature challenged Manning’s ruling and in 2004, the N.C. Supreme Court unanimously upheld it.

The legislature and the parties to the suit entered into a court-approved “Comprehensive Remedial Plan” establishing how adequate funding for a sound education would be continually provided for over time. The Supreme Court designated Manning to continue overseeing the case. Upon Manning’s retirement, the court appointed Judge David Lee, a duly elected Superior Court judge with general jurisdiction throughout North Carolina, not a county judge, to oversee the implementation of the plan.

In the summer and fall of 2021, Lee issued orders requiring the legislature to report on its progress in funding education as required under the plan. At a hearing on Oct. 18, Lee found that the legislature had not finalized an appropriations bill that would fully fund education. Lee issued an order giving the state until Nov. 1 to explain why the court should not exercise its remedial powers to require proper funding.

In response to Lee’s orders, Senate leader Phil Berger held a news conference and said: “Judge Lee is unhinged. … This is but another example of why the founders were right to divide power among the branches of government, giving power to create law and spend money with the legislature, not unaccountable and an unelected trial judge. ... Judge Lee makes a mockery of our constitutional order with every additional hearing.”

That legislators believe they can ignore constitutional obligations without check by the courts should profoundly disturb all citizens. That some legislators demeaned a judge acting in accordance with law, thereby undermining judicial independence and authority, is equally disturbing.

Article I, Section 35 of the N.C. Constitution provides: “A frequent recurrence to fundamental principles is absolutely necessary to preserve the blessings of liberty.” Fundamental principles include the doctrines of separation of powers, judicial review and the rule of law administered fairly and impartially by an independent judiciary.