Buried in concrete: Cemetery hidden in mall parking deck dates back to 1800s 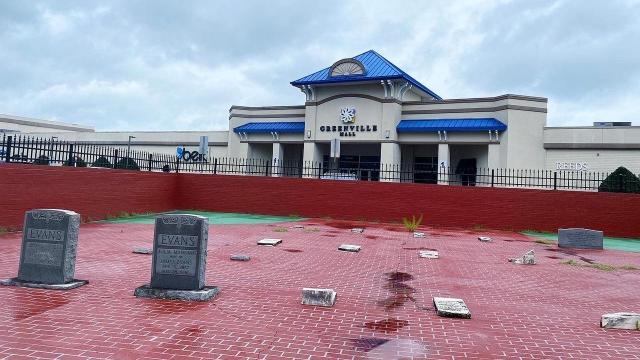 When families in the 1800s buried loved ones on a quiet hillside on their small family farm, they likely never imagined one day an entire shopping mall would be built around their ancestors.

But if you go shopping at the Greenville Mall, you may be surprised to discover a collection of graves, covered in concrete, hidden behind a brick wall in the parking deck.

The walls are high enough that most people walk right past without even noticing.

A closer look at the Evans family cemetery

Some of the graves here are surprisingly old – with at least two people buried here having been born in the early 1780s.

To put that in perspective, these people were born a decade before Raleigh even existed (1792), and North Carolina wasn't even yet a state (1789).

Nancy Proctor Evans was born in 1782 and lived a lengthy 94 years until her death in 1877. Born just after the Revolutionary War, she would have lived to see the Civil War. 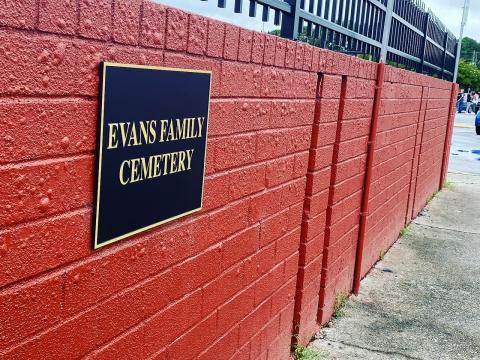 She's buried alongside her husband John, who was born in 1785 and died in 1838 at just 52 years old. His grave is the oldest marked plot in the cemetery.

One of the most recent graves appears to be that of Anne Maude Sermons Evans, who was buried in 1946. She was born in 1855, living 91 years and likely seeing the Civil War, World War I and parts of World War II all in her lifetime.

Generations of children and grandchildren are buried in this cemetery. 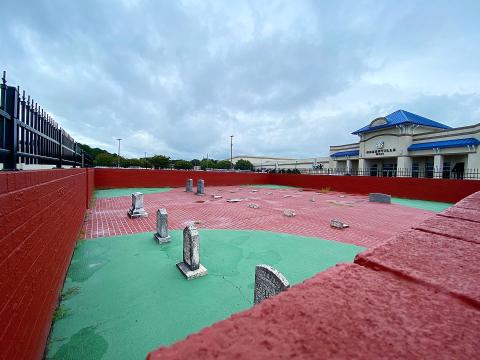 When was the Greenville Mall built overtop the graves?

The Greenville Mall that stands over the cemetery today was first built as a strip center named Pitt Plaza in 1966. This would have been around 20 years after the final burial in the cemetery.

In those days, some people recall seeing the graves, not yet covered in concrete, but grass.

When Pitt Plaza was enclosed in the early 1980s, it became known as the Colonial Mall. Later, the name changed again to Greenville Mall.

For a while, the graves were visible in the grass, but were later covered in concrete and surrounded by a white brick wall.

Those who peeked over the wall might find broken headstones, fallen over in rows and left laying down on the asphalt. Headstones should not be repaired without the help of experts, so while fallen headstones may appear sad or disrespectful, it can actually be worse for an untrained person to try to fix them.

Most recently, the cemetery has gotten a new layer of red bricks and green paint to make it look more vibrant and cared for. The traditional photos of the gray graves covered in dark asphalt are most recognizable by people who have heard of the cemetery, but the upgrades have made it look very different. 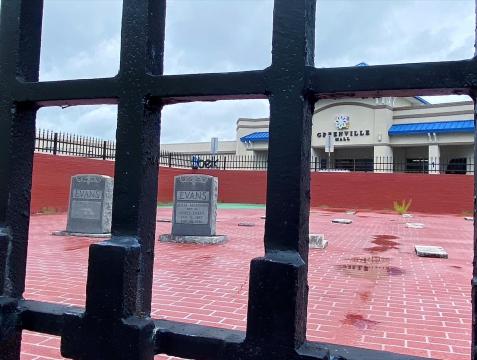 The Evans family in Greenville history

The name 'Evans' appears frequently in Greenville – on road signs, multiple cemeteries and in the history books.

Very near the cemetery at Greenville Mall is Evans Road.

Down that road is another cemetery with Evans family members buried there – this small cemetery is also 'hidden.' It's just beside a school football stadium, just out of view of the bleachers.

Graves hidden in a parking lot in downtown Cary

Back in 1771, a man named Richard Evans was authorized by the NC General Assembly to form a town by dividing his 100-acre plantation. Seven commissioners were appointed, including Evans, to sell lots of the new town in public auctions. Back then, the town was called Martinsborough, named after the royal governor Josiah Martin. This was before the founding of the United States.

Are the people buried in the Greenville Mall graves related to the man who founded the town? 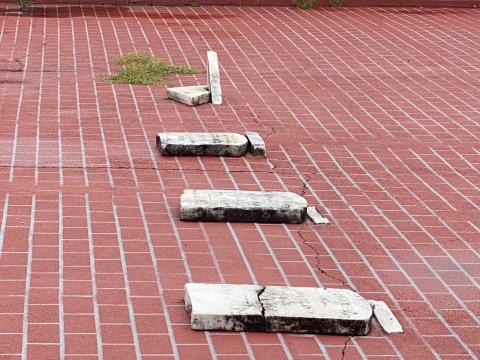 Given that the two oldest graves also date back to a similar time period as Richard Evans, and that the town would have been very small at the time, it's unlikely there were two different Evans families living in the same town at the same time – so, it's possible.

After all, the same thing happened in Cary. One of Cary's original founding families is buried in a parking lot in downtown.