Burger review of the month: Only Burger

Durham, N.C. — BREAKING NEWS: "Everyone was Right about Only Burger, apparently"

In a turn of events that shocked no one, world-renowned burgiatrists The Straight Beef finally visited Durham’s Only Burger—which had been only recommended to them about 512 times, for the love of all things holy—and “freakin’ loved it.”

“It’s about time those guys went there,” said Sheila Montalbán, Duke University environmental studies student and self-proclaimed “Straight Beef freak.” “Only Burger is only like the best burger in the world, basically. Everyone says so. I don’t even know what took them so long.” Added Montalbán, “Hello? Duh?”

The Straight Beef, which has been reviewing Triangle-area hamburgers since 2009, admits that the group had been talking about reviewing the Duke University favorite for a “ridiculous length of time,” and that there is no excuse for making Only Burger its 38th official review instead of, let’s say, its 4th, even though everyone and their uncle has been insisting that they just shut up and go already.

All four members of The Straight Beef conceded that yes, fine, apparently everyone had been right.

“Once I had locked my eating-claw on the burger, I could not put it down until it was gone,” said TSB’s spiritual guide “Reverend” Don Corey, who ensured that his double with bacon, cheese, and egg was not long for this world. “The worst part of the night was when I finished the burger and didn’t have room for another.”

TSB’s burger renegade Chad “The Griddler” Ward concurred. “I was knocked out by the beefy richness, the salty crust, the juiciness of the burger,” said Ward, who ordered a double cheddar burger with bacon only, opting to “get a feel for the basic burger before gussying it up with toppings.” Ward averred that anyone who does not love Only Burger “clearly has been taken over by pod people who not only lack taste buds but hate freedom and America.”

Ward added that although The Straight Beef does not rate side dishes and tries not to be influenced by them in their burger evaluations, the sides at Only Burger were simply insane. “If we rated side dishes along with the hamburger,” Ward said, “Only Burger would be a six out of five on my scale.” 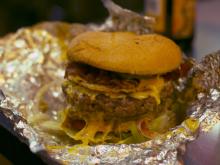 “We went three years without knowing the joy that is Only Burger’s exquisitely flavored patty,” said Scott Blumenthal, renowned British burgiatrist and TSB co-founder, who downed two singles with classic condiments, no questions asked. “We’re never going to get those years back. We’re just not. Those years are gone.”

When asked for his initial comment, leading holistic burgologist and TSB co-founder Michael Marino, who downed the same burger combo as Corey, plus mayo, managed only to scribble on a sheet of paper that he could “not talk, what for all the drooling.”

Scott Blumenthal, Michael Marino, Chad Ward and Donald Corey are The Straight Beef, professional burgiatrists who review, rate and rank Triangle-area burgers on their award-winning blog. You can read more about The Straight Beef, including their education and scholarship, ratings system, and burger categorization method here.