Burger review of the month: Cameron Bar and Grill 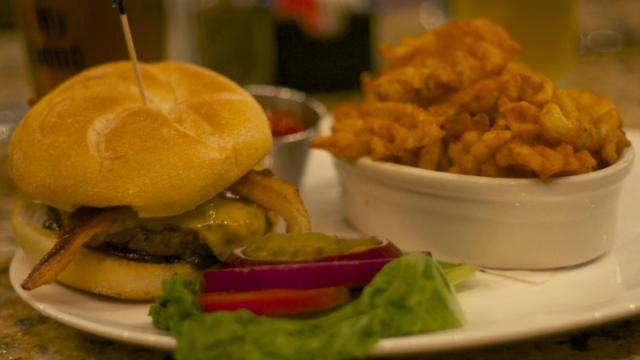 This month, The Straight Beef took a trip to Cameron Bar and Grill in Raleigh. We were joined by the legendary Paul Friedrich, artist and author of the Eisner Award-nominated graphic novel “Onion Head Monster.” Paul is also the creator of the award-winning “Cup of Awesome” comic strip and animation for the Carolina Hurricanes. Visit Paul at facebook.com/PaulFriedrich, OnionHeadMonster.com, and MANvLIVER.com.

Paul’s Review
I’m a believer in Applebee’s. I like how they’ve spent NASA amounts of money to develop the perfectly average burger. A touch more flavor would make it above average, a pinch less salt would take it below. But when you order it, you know you’re going to get a hamburger. The Memphis burger at Cameron Bar and Grill (“bbq sauce, cheddar, bacon”) aims to be an Applebee’s burger. 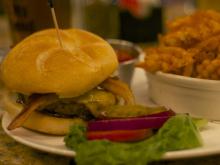 The Memphis, hearty in size, looks good when served. Had I been a fireman that was suddenly called away for an emergency before eating it, my memories would have been good ones. Two strips of bacon criss-crossed the patty like an X marking the spot of a treasure. But there was no treasure tonight. The barbeque sauce, which could have been any of at least 9,000 barbeque sauces known to man, chose to be that of Burger King’s Western Burger. A sauce for people who think ketchup is too spicy.

The bun held the burger in place and allowed proper plate-to-mouth movement, but was too stiff to absorb the burger’s juices. The patty itself was gritty in texture, with little flavor. It wasn’t until halfway through the meal that I recalled the “cheddar” part of the burger’s description. Placed on the hamburger too early during grilling, the cheese had all but disappeared. Oh Cheddar cheese, I barely got to know you!

By the end, I knew that if someone asked me the next day what I had for dinner the night before, I would have to pause before remembering that I had eaten a hamburger.


Michael’s Review
This is what I imagine our waiter was saying to himself before he brought my burger out:

"C’mon, Kevin. Get ready. That world-renowned burgiatrist out there is waiting for his Baltimore burger. It’s time to be the best waiter you can.

I can’t procrastinate any longer—he polished off those wings. Too bad he didn’t get the hot wings to dull his taste buds. Our burgers’ patties are bland and dry, and the crumbly kaiser roll will fall apart before he is halfway done. The Baltimore’s crab dip and goat cheese will hide that, though, right? Sure it will. Good thing the volume of the toppings is greater than that of the patty itself. You know—just to be sure.

I have been to dine at Cameron Pub in the Colonie of North Carolina about a Fortnight ago, and was desirous I should try the Sandwich “Baltimore meat patty betwixt two breads.” For common right dictates that all comestibles with “creamy crab & goat cheese dip” are by their nature pleasing and instructive. Alas, in the case of the Baltimore Sandwich, common right was taking a Snooze. The dip was fair, but the patty had the disposition of George III after a few too many whistle bellies—and not in a good way. I mean, c’mon people.
Tom

Scott Blumenthal and Michael Marino are The Straight Beef, professional burgiatrists who review, rate and rank Triangle-area burgers on their award-winning blog. You can read more about The Straight Beef, including their education and scholarship, ratings system, and burger categorization method here.