Burger King has a message for McDonald's: Not every meal is happy 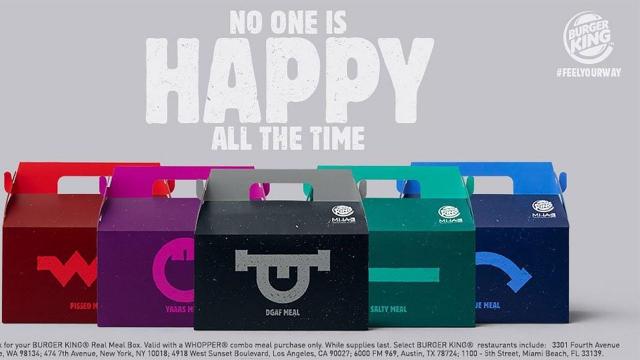 The fast food chain rolled out a new Whopper meal box, called "Real Meals," labeled with different moods and colors. The packaging comes in five moods: the Pissed in red, Blue for sad, Salty in teal, YAAAS in purple and DGAF (that's don't give a f--- in internet speak) in black.

And, good eyes, there's no "happy" option, like its competitor McDonald's has.

"With the pervasive nature of social media, there is so much pressure to appear happy and perfect," Burger King said in a release. "With Real Meals, the Burger King brand celebrates being yourself and feeling however you want to feel."

Burger King launched the meals Thursday, near the beginning of May, which is the start of Mental Health Awareness Month. The company partnered with the non-profit organization Mental Health America to promote the "overall mental health of all Americans."

The boxes are different colors, but the meals are the same. Each has a Whopper, french fries and a drink. They're a limited edition and are only available in Austin, Seattle, Miami, Los Angeles and New York City.

Burger King also produced a commercial for the #FeelYourWay campaign featuring young people experiencing the promotion's range of emotions. The nearly two-minute ad ends with "No one is happy all the time, and that's OK."

It's not the first time Burger King has trolled McDonald's. In December 2018, Burger King got people to download their app by sending them one-cent Whopper deals when they came within 600 feet of a McDonald's restaurant.

The fast food brand has a history of flashy stunts. The chain released an ad criticizing the Trump administration's decision to repeal net neutrality rules. The three-minute ad shows a "social experiment" in which a Burger King store implements a Whopper "fast lane."

It's not unusual for fast food rivals to go after McDonald's in their marketing: McDonald's is the market leader.

McDonald's did not immediately respond to a request for comment about the latest Burger King stunt.