Raleigh, N.C. — Lakea Shepard, a Winston-Salem native, has asked herself in recent years: What does it mean to protect myself and how do I do it? The question crept into her dreams, and one night, she dreamed that a young Black boy was shot in front of her.

"It made me think about myself, being in a brand new city," she said. "How am I going to protect myself from the world around me?"

The ways that many people protect themselves is through weapons. That's what her father did. But as a Black woman, she wasn't allowed to touch her father's gun. 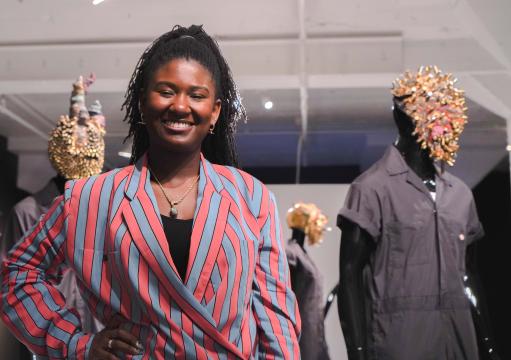 "You can't do that, that's off limits," she said. "I don't agree with it, that's why I decided to explore that idea of protection."

She decided to explore other ways of protection, aside from a weapon, through her art. "Now I have my own perspective on what being a Black woman in America, and being protected, means to me," she said.

Protection to Shepard boiled down to wisdom and knowledge from her family. Her pieces use items she finds at home, or that her mother gives her from local thrift shops. She uses textiles, beads and thread to learn about her identity. 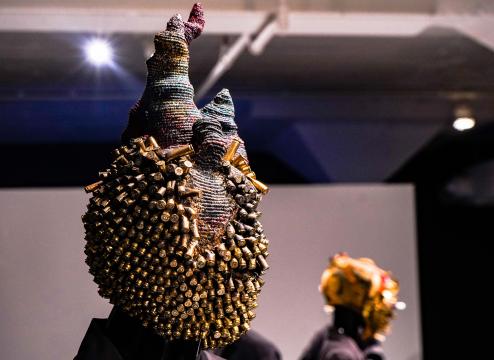 Shepard's newest sculptures featured in the Contemporary Art Museum of Raleigh give us a glimpse inside her family's story. The woven headpieces feature waxed linen and bullet casings. The head sculptures are placed on mannequins dressed in Dickey's jumpsuits, like her father used to wear.

Lakea Shepard attended the University of North Carolina School of the Arts and then the College for Creative Studies in Detroit. She's currently working in Winston-Salem.

You can visit the CAM Raleigh on 409 W. Martin St., Raleigh, for free on Saturdays and Sundays. CAM Raleigh is a non-profit that relies on memberships and donor funding. To become a member, go to CAM Raleigh's website.

For this series, Shepard flew to Detroit to an African bead museum. There are thousands of different beads to chose from, and Shepard said she selects ones that inspire and touch her.

Her exhibit that opened at the CAM Raleigh, "Malik: Sovereign of Faith" is dedicated to her late Uncle, Malik Ali Sharif who Shepard said, "planted a seed of faith in my vision." 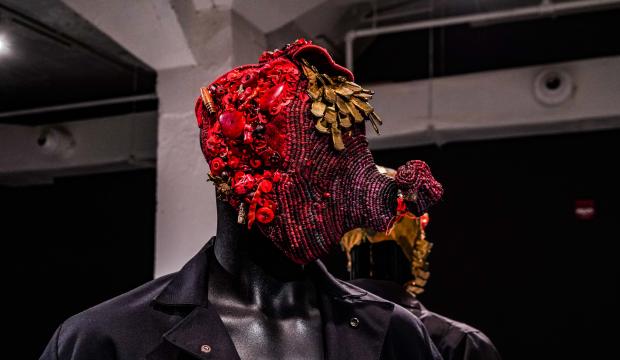 "The world that I'm in has been created by something or someone," she said, "it's always pulling at my heart. I naturally gravitate toward certain things."

She created her first headpiece for her piece "Poppa Said Girls Don't Play With Guns" in 2012. That year, a gunman killed 26 people at Sandy Hook Elementary School, spawning conversations in our culture around gun violence. Our society was asking itself, what does it mean to protect children in schools, and how do we do it?

"It has more depth and more meaning, not just to me, but more people now," Shepard said.

Shepard's pieces are ambiguous and multi-dimensional. They could be described as fashion, conceptual art or performance pieces, she said. The mannequins are beautiful yet eerie, as they try to let you into a part of Shepard's mind.

Each of Shepard's pieces are marked by her signature — bright red thread. In African culture, red represents femininity and, "the uniqueness of my work coming to life," she said.

"Being a Black woman is enough inspiration to make a life-long body of work," she said. 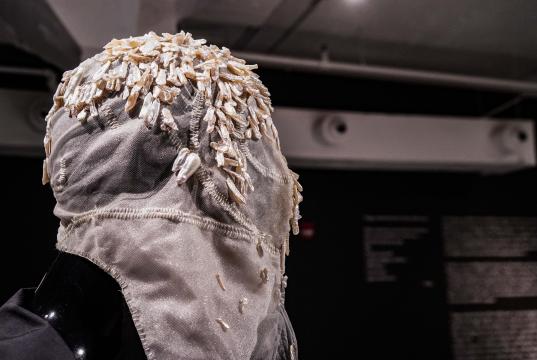