Budget deal pushed to next week 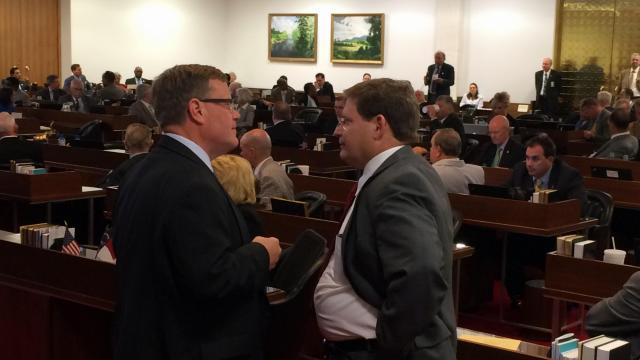 Raleigh, N.C. — Although House and Senate budget negotiators agree they're making progress, leaders now don't expect a deal to be released before the weekend, with votes scheduled for next week.

House Speaker Tim Moore told House members Wednesday there will be no floor votes Thursday and likely none next Monday. But Moore added that he's hopeful his chamber will vote on the budget next Wednesday and Thursday.

Under House rules, a budget conference report must be available to the public for 72 hours before a vote can be taken on it, so a final document would have be released by Sunday to allow a Wednesday vote.

"We're getting there, but we're not there yet," said Moore, R-Cleveland, adding that "a handful of issues" are still outstanding.

However, he added, they've made "significant progress" in a number of areas, including a finance package of tax changes on which negotiations had largely been deadlocked as of Tuesday.

"We're closer than we've ever been" on that package, agreed House Rules Chairman David Lewis, R-Harnett.

Lewis declined to offer details on the finance package but confirmed that both sides have agreed to fund the film grant program at $30 million for the current fiscal year, tripling its funding from last year.

Lewis' and Moore's comments by and large meshed with those of Senate leaders, who did not expect to take votes on Thursday and said Wednesday that a handful of thorny issues were still under discussion.

"By Friday, everything will be agreed upon. I just don't know if it will be printed to see by then," said Sen. Harry Brown, R-Onslow.

Two key sticking points have been mostly resolved, according to senior leaders in both chambers:

Brown said there is also tentative agreement to expand the number of terminal groins – hardened structures designed to preserve barrier islands but decried as expensive and ineffective by environmentalists – allowed in the state from four to six.

If lawmakers stay on their current pace and do hold budget votes next week, they will beat a Sept. 18 deadline when the state's third temporary funding bill of the year will expire.