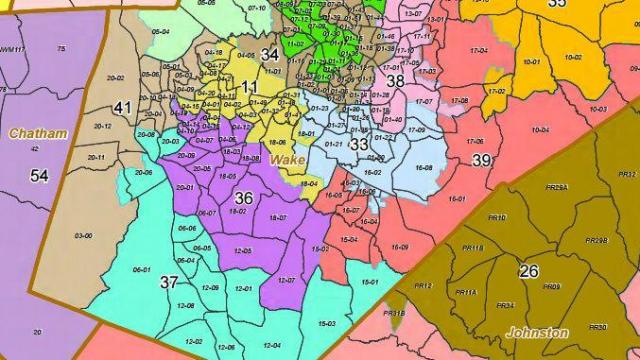 Incumbent Rep. Nelson Dollar, R-Wake, insists his record after six terms speaks of a conservative who has stood by the party politically on the campaign trail and philosophically on the House floor. But challenger Mark Villee insists Dollar's record marks him as a spendthrift who, as budget chairman, advocated for more government spending than Republican Gov. Pat McCrory or the majority of state senators.

Age: 54
Family: Married, 1 son
Profession: Media and public relations consultant
Political Activities: Member of the state House since 2005 (six terms). Currently serves as House budget chairman.
On the Bond: Dollar supports the $2 billion bond on the March 15 ballot, saying it will help make the state more economically competitive. "When you look at the bond issue, our focus is on facilities that are in engineering, in the hard sciences," Dollar said. "Those investments are going to allow us to train and educate our citizens."
Website: http://www.nelsondollar.net

Age: 57
Family: Married, 3 sons
Profession: Engineer, owner of a home inspection business
Political Activities: This is his first run for elected office; has served as chairman of his local precinct and House District 36.
On the Bond: Villee opposes the $2 billion bond on the March 15 ballot, saying that there is not enough accountability attached to the spending. The university and community college buildings that the bond will support should be funded through the budget over time, he said, rather than paid for all at once through borrowing. "It's not something that's needed like highways and roads," he said.
Website: http://www.markforhouse.com

The race, which features spending by an outspoken conservative donor who vocally ripped Dollar's work last summer, has shaped up to pit a newcomer appealing to the GOP's perennial pledges of government austerity against the House's top budget chairman who prides himself on understanding the complexities of how government works.

Dollar says that Villee and others are relying on "lies and innuendo" to attack his record.

"It's easy for someone to make false criticisms when they have no clue what they're talking about," Dollar said.

Both men are already airing television ads – Villee on cable television, Dollar on broadcast – making the race one of the more hard fought in the Triangle.

Although House District 36 favors Republicans in the fall general election, it is in a fast-growing suburban area where demographics can quickly shift the dynamics of a race. It also is no stranger to primary battles. Dollar himself ousted then-incumbent David Miner, a fellow Republican, during the 2004 campaign.

Many of the differences between Villee and Dollar appear rooted in the 2015 budget battle, the first GOP-led budget since 2011 that featured a budget surplus as a recovering economy made more tax dollars available.

Dollar, as budget chairman, put together a House budget that spent more than had been proposed by McCrory, what would have been a roughly 6 percent jump in spending. Although the final budget was a 3 percent increase, more in line with McCrory's plan even if it was higher than proposed by the state Senate, conservative groups such as Americans for Prosperity and the Civitas Institute blasted the House's efforts.

Dollar and House leaders argued at the time that the economic turnaround made it possible to invest in long-neglected programs. Critics countered that jacking up spending quickly could plunge the state back into a precarious fiscal situation.

The proposed spending also drew the ire of Bob Luddy, a conservative donor and the president of CaptiveAire, a Raleigh-based kitchen ventilation company. At the time, he told lawmakers he would divert a donation once slated for the House Republican caucus to Americans for Prosperity.

"He proposed a budget that was over half a billion more than either the governor or the Senate," Luddy said last week. "That's not what we expected out of conservative leadership."

Luddy has put at least $40,000 into an independent expenditure effort seeking to unseat Dollar. Luddy calls Villee "a hard-working guy who has common sense." While Luddy's stopnelsondollar.com effort is not allowed to coordinate with Villee's official campaign, both are telling voters that conservatives need "Change for a Dollar" and accuse Dollar of aiding special interest groups.

"I would just prefer somebody who represents the people of North Carolina and not the special interests," Luddy said.

Among those endorsing Dollar's campaign are the State Employees Association of North Carolina, the largest organization representing state workers. One of the reasons that the budget Dollar championed was bigger than the state Senate's was that he advocated for a 2 percent raise for state employees.

Tony Smith, the chairman of SEANC's political action committee, called Dollar, "a friend to state employees" and noted that Dollar ran into criticism from "groups who feel like spending money to help your employees keep up with the cost of living is 'wasteful.'"

As a budget chairman, Dollar also is able to readily raise funds from groups with business pending before the General Assembly. Political committees attached to rail giant CSX, various health care groups and drug companies and PSNC Energy all contributed to his campaign in the last six months of 2015.

Like Luddy, Villee suggests this is more evidence that Dollar is beholden to special interests.

But Dollar shoots back that it is Villee who will be beholden to Luddy, who is pouring an outsized sum of money into his campaign. Donors to an individual candidate are allowed to give only $5,100 per election, a sum Luddy has already exceeded more than five times over.

"He (Luddy) is setting Mr. Villee up as a puppet," Dollar said.

Villee brushed off the accusation, saying that he was encouraged to run by "grass roots conservatives" and other members of the General Assembly. Asked who those members were, Villee said he couldn't name them without permission.

But within the General Assembly, there has been a simmering war of words between leadership figures like Dollar and House Speaker Tim Moore and self-styled hard-line conservatives such as Rep. Justin Burr, R-Stanley, who were critical of their chamber's approach to the budget.

"There's a sense among conservatives that the budget he helped champion was bigger than it needed to be," said Joe Stewart, executive director of the North Carolina Free Enterprise Foundation.

Stewart points out that the GOP, now that it is firmly in control of both the legislative and executive branches, is having to accommodate all brands of Republicans. That includes tea party conservatives friendly to Villee, as well as long-time policy wonks like Dollar.

He also noted that Dollar was acting on behalf of the Republican majority in the House: "It's not as though he singularly decided what would be in the budget he put forward."

Villee says that Dollar should be held accountable, though, because he was in leadership and in a position to influence how that spending document was put together.

Americans for Prosperity is a conservative group that is part of a network of politically active nonprofits affiliated with billionaire industrialists Charles and David Koch. The group has been critical of subsidies the state has used to support renewable energy and has been making phone calls and distributing door hangers in House District 36 critical of Dollar's role in extending a key tax credit.

North Carolina's solar energy tax credit had been due to sunset on Dec. 31. But several large-scale projects that were relying on the credit said they may not be able to finish work by the end of 2015 and asked for an extension. The bill Kyzer and AFP are criticizing gave those projects more time to finish and use the credit.

Solar energy advocates dispute the $1 billion estimate, saying that it relies on a Department of Revenue report from the fall that projected the cost of all solar energy credits that would qualify for an extension under the bill. Most, advocates argued, finished by Dec. 31.

Villee has echoed AFP's criticism of those tax credits in his own campaign.

"Our government gives away close to $1 billion in subsidies to solar energy companies," he said, adding that money should have gone toward building the portion of Interstate 540 that will now be completed as a toll road. "People don't want a toll road."

Dollar points out that the tax credit bill in question was drafted by some of the more conservative members of the Senate. The idea of using money from a tax break to offset road spending doesn't square with how North Carolina budgets work, he added.

"Mark Villee doesn't know what he's talking about," Dollar said. "He is mistaken by trying to conflate the potential value of tax credits versus spending in the budget."

It is one of several areas where Dollar points to his experience in government as an asset to defend himself against Villee's attacks.

Reforming Medicaid has long been a contentious subject at the General Assembly. The state health insurance program for the poor and disabled became a regular sore point for lawmakers due to cost overruns. Dollar was one of a handful of lawmakers leading the discussion over the past five years about how to remake the program so it was both less costly and worked better.

Dollar favored an approach that would build up North Carolina-based accountable care organizations created by doctors and hospitals to take on the burden of running the system. Senate leaders pushed for changes that would have cleared the way for large, national managed care companies to take over the $14 billion program. Late in 2015, House and Senate leaders reached a compromise that rolled pieces of both plans into a single effort to privatize the system.

Dollar voted against it.

"We need reform in North Carolina that is based on caring for our citizens and not for a group of stockholders," Dollar said at the time of the vote. "Why more than double the administrative cost we’re currently paying by adding middlemen between our doctors and patients? I just don’t see where the value is."

Villee said the vote marked Dollar as a turncoat, bucking his party in favor of the doctors and hospitals who donated to his campaign.

"He essentially took a stand with the Democrats and said he didn't want to change a thing," Villee said.

Dollar lashed back, saying that his long experience with the program would be valuable in overseeing what will now be a long and costly transition process. He also points out that the state's existing Medicaid program has brought costs under control since Republican lawmakers took charge in 2011.

"What Mr. Villee knows about Medicaid could fit in a thimble," Dollar said. "I've talked to him. He doesn't know or understand the issues surrounding Medicaid."

Voters go to the polls on March 15, but by-mail early voting is already underway. Stewart says it's unclear how much arguments over complex issues such as renewable energy and Medicaid will drive votes. Rather, he said, Dollar and Villee may bee trying their luck with an uncertain electorate that is voting earlier in the year than usual and being driven to the polls by a presidential contest that has so far favored figures such as Donald Trump and U.S. Sen. Ted Cruz who define themselves in opposition to the government.

"There is nothing we can take away from the New Hampshire primary more than the mood of voters in both parties is strongly, stridently anti-establishment," Stewart said.