Bud Light is coming out with hard seltzer 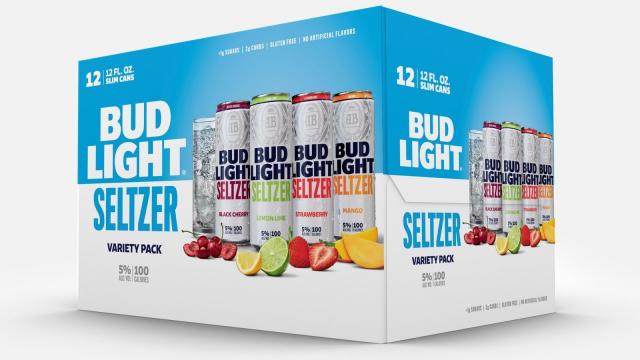 Anheuser-Busch InBev's newest addition to its spiked seltzer lineup is coming early next year. Although it's named after its bestselling beer, Bud Light Seltzer will taste like hard seltzer. The beer conglomerate hopes the recognizable Bud Light brand will give it an edge in the rapidly growing segment of the alcohol business.

Bud Light Seltzer, which will debut in the first quarter of 2020, is made from cane sugar and natural fruit flavor. One can has 100 calories, 2 grams of carbs and 5% alcohol by volume. It will be available in four flavors, including black cherry, lemon lime, strawberry and mango.

The beverages will be sold as 12-packs in variety or single flavors and as individual 25-ounce cans.

"Seltzer has brought excitement to the entire category and brought consumers back to beer," said Andy Goeler, Bud Light's vice president of marketing in a press release. "We are looking forward to leveraging the power of the Bud Light brand to help grow the category."

An Anheuser-Bush spokesperson told CNN Business that Bud Light Seltzer "falls in a spot in between our other seltzer brands," meaning it will be more expensive than Natural Light and cheaper than Bon & Viv.

"This portfolio approach and the power of the Bud Light brand will help us lead growth of the category," the spokesperson said.

Beverage companies are looking to dethrone White Claw, which is the United States' top-selling spiked seltzer brand. The drink commands 58% of spiked seltzer sales, according to analysts at Guggenheim Partners. But the Mark Anthony Brands-owned beverage, best known for Mike's Hard Lemonade, is still experiencing a shortage.

Then there's Truly, which is produced by Boston Beer. An analyst recently raised the company's earnings estimates for the next three years because of demand for the spiked seltzer. Last month, Truly rolled out a new recipe for the beverage for all of its flavors.

Plenty of other alcohol companies have their own spiked seltzers, too, including Smirnoff and Two Roads Brewing Company. The influx of growth is the result of customers seeking drinks with fewer calories and less sugar.

Sales of hard seltzer surpassed $1 billion for the year ending in August, according to Nielsen. But Jim Watson, an analyst from Rabobank, predicts the category could grow even more and reach $3 billion over the next three years

In a recent note to clients, Watson said that the beverage has staying power because people are shifting away from light lager and craving low-calorie drinks, which appeal to both genders equally.

"Indulgence drinks still abound in the marketplace, but hard seltzers are winning on flavor without extra calories and carbs, positioning it extremely well for the long haul," he said.