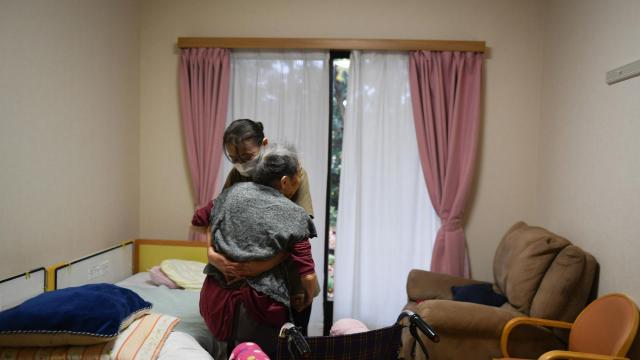 KASHIWA, Japan — When it comes to immigration to Japan, Koichiro Goto is blunt.

“To accept a lot of immigrants would break down the borders of our singular nation,” said Goto, director of a nursing home company in Kashiwa, a suburb of Tokyo.

Yet Goto, who also serves on the City Council, supported a bill that passed Japan’s Parliament early Saturday, allowing for a sharp increase in the number of foreign workers who will be admitted to Japan starting next year.

As immigration roils the politics of the West and the United States and Europe seek to lock down their borders, Japan — long considered one of the most insular of nations — is moving in the other direction, surprising its neighbors and perhaps itself, by opening its doors just a bit wider to immigrants.

Goto’s reasoning for endorsing the measure is purely economic: He is desperate to hire caregivers at Mother’s Garden, a 70-room nursing home where there is a waiting list of 60 would-be residents and want ads hardly ever attract job applicants.

“If we aren’t helped by foreign workers,” Goto said, “this business would not survive.”

Under the bill that passed Parliament’s upper house on Saturday, Japan will offer five-year work visas to unskilled guest workers for the first time. Between 260,000 and 345,000 will be made available for workers in 14 sectors suffering from severe labor shortages, including caregiving, construction, agriculture and shipbuilding.

The bill also creates a separate visa category for high-skilled workers, who will be allowed to stay for unlimited periods and enjoy greater benefits, including permission to bring their families to Japan.

The new law appears to mark a significant turnaround for the right-leaning administration of Prime Minister Shinzo Abe. As recently as three years ago, Abe said on the sidelines of the U.N. General Assembly that “there are many things that we should do before accepting immigrants.”

To cope with labor shortages resulting from a declining population, he advocated for more women in the workplace, delaying retirement and using robots to do jobs once filled by humans.

But Japan’s shrinking workforce and rapidly aging population put pressure on Abe and his conservative supporters to accept that the nation’s demographic challenges could not be solved by internal measures alone.

In the absence of immigration, Japan’s population is projected to shrink by about 16 million people — or nearly 13 percent — over the next 25 years, while the proportion of those older than 65 is expected to rise from a quarter of the population to more than a third. In caregiving alone, the government estimates that employers will need an additional 377,000 workers by 2025.

The shortage of workers is “an urgent matter,” Abe said during a parliamentary session late last month. The country, he said, needs “foreign workers as soon as possible.”

Yet the new law, which came under considerable criticism from opposition parties, does not represent an embrace of immigration so much as a deeply ambivalent business calculation. The bill, strongly pushed by industry groups, is vague in some aspects and is designed to limit the kinds of work foreigners can do, as well as how long they can stay.

“This isn’t about Japan becoming a multicultural society and it’s not about Japan opening its doors to become more globally oriented,” said Gabriele Vogt, a professor of Japanese politics and society at the University of Hamburg who has studied migration. “This is just very plain labor market politics.”

Although the new law marks a shift in official policy, Japan has long accepted foreign workers through backdoor routes, such as visas granted to Brazilians and Peruvians of Japanese descent or technical programs for interns, mainly from China and Southeast Asia, purportedly so they can be trained in skills to take back to their home countries. As of October, there were nearly 1.3 million foreign workers in Japan, according to the government.

Many employers use the trainees as cheap labor, and they often are abused. Between 2015 and 2017, the government reported that 63 foreign trainees had died from accidents or illness in Japan, with another six committing suicide.

Critics fear the new law could simply extend the exploitation of foreign workers. “Without monitoring or an inspection system, the system won’t be managed properly,” said Chikako Kashiwazaki, a sociology professor at Keio University in Tokyo.

In a sign of how deep suspicion of foreigners runs here, politicians from both the right and the left have questioned whether accepting more workers from abroad will disrupt society.

“We need to secure jobs for old and middle-aged people, women and the youth who could not get jobs because of social withdrawal or depression,” Shigeharu Aoyama, a lawmaker from Abe’s governing Liberal Democratic Party, wrote in Ironna, a right-leaning online magazine. “We need to stop foreigners from using Japan’s social welfare system.”

Addressing the House of Representatives late last month, Shiori Yamao, a lawmaker from the left-leaning Constitutional Democratic Party, the largest opposition group, warned that “if we open up the door without carefully designing the system, we will not be able to shut the door easily.” At Mother’s Garden, the nursing home in Kashiwa, where Christmas decorations blanketed the halls, Goto, the director, said he worried about cultural clashes between Japanese and incoming foreign workers.

“I think it might be difficult for foreigners to understand” Japan’s spirit, he said.

But Kanako Matsuo, the nursing home’s facilities director, said the handful of workers from Taiwan, the Philippines and Vietnam who work there “have the same hearts” as their Japanese colleagues.

“I don’t feel any gap in working with them,” Matsuo said.

At lunchtime on Thursday, Ayuko Iwai, 29, a Japanese caregiver, spooned mashed chicken and soft-boiled rice into a resident’s mouth. A colleague was helping someone else, but five other residents sat listlessly in wheelchairs before a television. Soon it would be time for the colleague’s break, and Iwai would be left to supervise 10 residents on her own.

“If we had more staff we could care for each patient more individually,” Iwai said.

Some employers say foreigners may not want nursing home jobs. “If we don’t elevate the status of caregiving we won’t be able to recruit enough workers,” said Kaoru Sasaki, vice chairman of an association that represents 2,800 operators of group homes for elderly patients with dementia.

The job can be grueling. At Mother’s Garden, caregivers bathe residents, change diapers and help them get dressed. They clean bathrooms and kitchens and take care of a pet rabbit. The average monthly pay after three years on the job is 200,000 yen (about $1,775, which works out to roughly $11 an hour).

Lower-skilled foreign workers on temporary visas are unlikely to have much choice of jobs and won’t be allowed to bring their families. Analysts worry they will be treated as mere cogs.

“It raises these much broader ethical questions that I don’t think the administration has thought through quite yet,” said Erin Chung, a professor of East Asian politics at Johns Hopkins University in Baltimore. “If anything, the administration might feel quite emboldened during the Trump era to enact policies that treat migrant workers and value them only for their labor without acknowledging their humanity.” Abe has emphasized the temporary nature of the visas. But analysts say the government needs to develop a longer-term immigration policy.

Lully Miura, a lecturer on international politics at Tokyo University, predicted that China, which will also soon face a declining and aging population, would eventually start to recruit foreign workers as well. “So we have to create a proper system for foreign workers in order for them to stay and live and work happily in Japan,” she said.

Local governments struggle to provide services for foreigners. Katsutoshi Murayama, an official at Kashiwa City Hall, said workers had to publish guidelines for emergency evacuations and trash disposal in several languages. He wondered whether newcomers would acclimate to Japan’s rules-based culture.

“Our biggest worries are about whether they will be able to follow rules, like sorting the garbage,” he said.

Such picayune concerns are often cited by Japanese who fear an influx of foreigners. At a meeting at Kashiwa Cross-Cultural Center, Michelle Fukai, 38, who was born in the Philippines, moved to Japan for work 13 years ago and married a Japanese man, said her neighbors had recently asked her to explain to a new Pakistani neighbor how to sort his recycling.

During a potluck lunch Thursday — where a couple dozen foreign-born residents and Japanese volunteers shared homemade treats like pancit palabok, a Filipino noodle dish, nasi goreng, an Indonesian-style fried rice, and a Brazilian cassava salad — Fukai said she hoped to become a caregiver at a local nursing home.

“Japan,” she said, “needs to be rescued by foreign workers.”