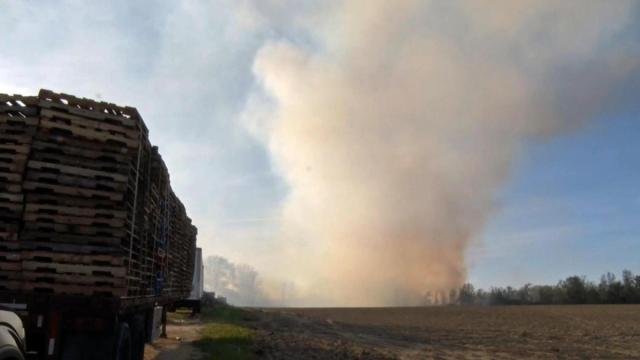 Dunn, N.C. — A brush fire on Saturday afternoon spread to a pallet company near Dunn and prompted a response from 17 fire departments from four counties.

Sampson County officials said they received a call around 12:16 p.m. for a brush fire at 391 Ira B Tart Road. Authorities said 10 acres of pallets caught fire at Barefoot Pallet Company, and numerous spot fires were reported around the area as high winds blew embers as far as a half mile away.

Firefighters had to let the pallets burn themselves out because they could not put the fire out on Saturday night. Crew will remain on scene overnight.

Some neighboring homes were evacuated as a precaution, but the homes were not damaged and there were not injuries reported.

At the fire's peak, 79 firefighters from Johnston, Harnett and Sampson counties were battling the fire.