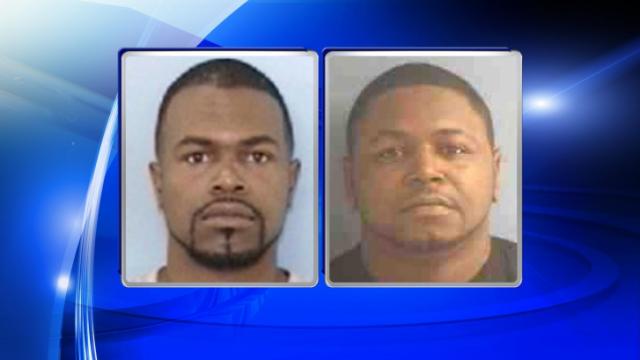 Brandon Tremaine Morris, 31, of 1410 Cypress St., is charged with assault with a deadly weapon with intent to kill. Morris surrendered to authorities Thursday morning. Investigators say he was the gunman in the shooting.

Demond Levar Morris, 36, was arrested late Wednesday in Raleigh and is also charged with two counts of assault with a deadly weapon with intent to kill in the case.

Demond Morris was in the Nash County jail Thursday morning under a $500,000 secured bond. Bond information for Brandon Morris was unavailable Thursday.

Sheriff Dick Jenkins declined to provide details about Demond Morris' role in the shooting, saying only, "People try to look out for family members."

The brothers are cooperating with investigators, the sheriff said, but he didn't disclose a motive for the shooting.

The arrests come one day after another man, 23-year-old Ontarius Montrae Lewis, was released after being questioned by Nash County officials.

Jenkins on Tuesday called Lewis the gunman in the shooting that left two men critically wounded and put the quiet town of Nashville under a lockdown for several hours.

Although Lewis was charged with attempted murder after his arrest, Jenkins said Thursday that he was merely taken into custody as a "person of interest" and was released after investigators determined he had a credible alibi for the time of the shooting.

"I don't want to offer an apology. I want to say that's the way we do things," a defensive Jenkins said at a Thursday afternoon news conference when asked about Lewis. "If we have information that, say, you did it, we're going to look at you and question you. When we find out there's nothing to it, we turn you loose. We're not going to do anything wrong intentionally, I promise you that, and we're not going to convict anybody or charge anybody that's not guilty."

Shooting victims Donte'a Evans and Lamar Ricks were in stable condition Thursday at Vidant Medical Center in Greenville. Evans was shot in the hand and leg, while Ricks was shot in the back.

Jenkins said Evans and Ricks were targeted and knew their assailants.

The courthouse reopened Wednesday morning, and the Nashville Police Chief Thomas Bashore said Thursday that the town "is a safe place for citizens and visitors."