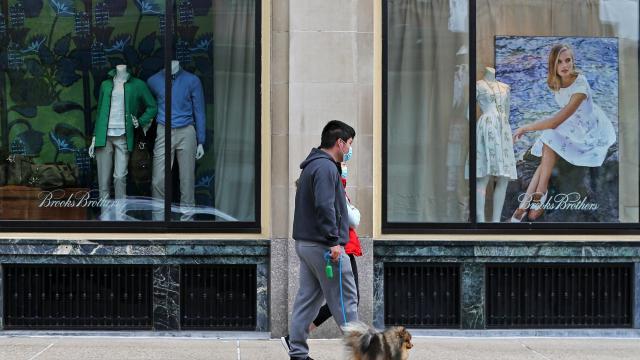 CNN — Brooks Brothers, the 200-year-old menswear retailer that has dressed 40 US presidents and unofficially became the outfitter of Wall Street bankers, has filed for bankruptcy.

The privately held company had been struggling as business attire grew more casual in recent years. But it has been decimated by the coronavirus pandemic, which sent demand for suits plummeting. Many working-from-home employees opted for far more relaxed looks of T-shirts and sweatpants rather than pinstripe suits and custom shirts.

"Although the pandemic has severely eroded the outlook for the business, Brooks Brothers has long suffered from a failure to decisively adapt to changing trends," said Neil Saunders, the managing director of GlobalData Retail. "When it comes to tastes and style, Brooks Brothers has been swimming against the tide."

Brooks Brothers filed for Chapter 11 early Wednesday in a Delaware court. It had warned in June it would lay off nearly 700 workers in three states and is seeking a buyer because coronavirus destroyed its business.

The company has been evaluating various strategic options, including a potential sale. But it has struggled to find a buyer. A company spokesperson told CNN Business that it expects to "complete the sale process within the next few months."

The retailer is in the process of shuttering 20% of its 250 US stores. According to the bankruptcy filing, Brooks Brothers has secured $75 million in financing to continue operating.

"The purpose of this filing is to obtain additional financing and facilitate a sale process in an efficient manner to maximize value for our stakeholders and ensure that our iconic brand is positioned to continue under new ownership," a company spokesperson said.

Brooks Brothers opened its first store in 1818 near Wall Street. Years later, it began making ready-made suits for men that couldn't wait for a tailor. In 1896, the retailer invented the original button-down polo shirt and has offered many other first of its kind clothing, including the madras prints and the chunky shetland sweater.

Claudio Del Vecchio, Brooks Brothers' owner, bought the brand in 2001 from Marks and Spencer for $225 million. He helped expand the brand's appeal beyond formal menswear, including casual clothes, like fleece, and preppy clothes aimed at youth. In an interview with him on its website, Del Vecchio said he became fascinated with the brand while growing up in Italy and "wanted to be a part of that in some way."

Still, Brooks Brothers maintained a decidedly formal and old-school approach to clothing design that proved out of step with younger shoppers looking for an edgier look, Saunders noted.

Brooks Brothers remains one of the last major retailers to make all of its products in the United States. But that is under threat too. Del Vecchio told the New York Times last month that its American factories "never made money" and planned to move some operations overseas to preserve cash.

It is the latest iconic retailer to go bankrupt. J.Crew, Neiman Marcus, JCPenney have all filed in recent months, partly citing slumping sales from the virus.

The pandemic hit Brooks Brothers especially hard because some workers were forced to work from home, eliminating the need for new suits and dressier clothes.

GlobalData Retail said in a note Wednesday that year-over-year sales of men's formal clothing fell by 74% between April and June.

"While this deterioration will ease over time, demand will remain suppressed for the rest of 2020 and well into 2021 as office working, business meetings, and socializing are all reduced," wrote Saunders. "This leaves Brooks Brothers very exposed to a depressed market."