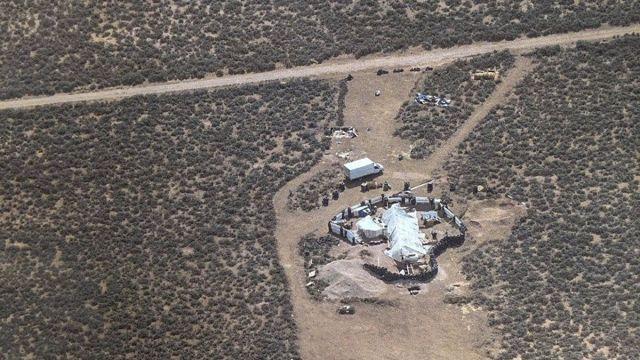 Investigators in New Mexico continued on Thursday to look into whether five adults, including a Georgia man whose father runs a mosque in Brooklyn, had been mistreating a group of children living with them in a rural compound in the desert north of Taos, possibly training them to carry out school shootings.

The imam at the Masjid at-Taqwa, Siraj Wahhaj, said Thursday that the decomposing body of a child found at the compound had been identified as his grandson.

“Something happened and we’re going to find out what happened,” said Wahhaj, who was leaving the mosque in Brooklyn on his way to New Mexico. “I want the truth to come out, whatever the truth is.”

A spokesman for the mosque, Ali Abdul-Karim Judan, said in a video posted on Facebook Thursday that the news media and the authorities were engaging in “propaganda” by wrongfully injecting mentions of international terrorism and school violence into what amounted to “a domestic situation” in New Mexico.

“They’re not bringing up accurate events — they’re bringing up false narratives,” Judan said. “Look how this case has turned from a domestic situation, and now they’re trying to create an atmosphere where his son is involved with an extremist radical group.”

Siraj Ibn Wahhaj, 40, and four of his relatives were charged with child abuse this week after 11 malnourished children were discovered in the squalid underground complex — built from a trailer covered in plastic — in the small town of Amalia, New Mexico. The authorities found the decomposing body of a young boy at the compound on Monday and have said that the remaining children, ages 1-15, had barely any food and no access to fresh water or basic hygiene.

Wahhaj’s father, also named Siraj Wahhaj, has for decades been the imam of Masjid at-Taqwa, which several people connected to the 1993 bombing of the World Trade Center either attended or visited around the time of the attack. During the investigation of the bombing, the elder Wahhaj was named on a list of several dozen potential conspirators in the plot, though he was never charged in the case and the list was later criticized for being overly broad, some former terrorism prosecutors said.

The elder Wahhaj has had a long career as a clergyman, traveling the world and delivering lectures on Islam, and even once gave a religious invocation in Congress.

Judan complained that it was inappropriate to connect the events in New Mexico, which first came to the attention of the authorities when Siraj Ibn Wahhaj’s wife complained that her husband had disappeared with their son, to any wider conspiracies.

“They’re talking about Imam Siraj and his radicalism and his extremism,” he said in the video. “They’re trying to link Imam Siraj with the World Trade Center bombing.”

The authorities in New Mexico have offered few details about the alleged weapons training other than to say, in court papers filed this week, that a foster parent of one of the 11 children at the compound told them that the adults there had trained their child in the use of an assault rifle as part of a “conspiracy to commit school shootings.” At a court appearance on Wednesday, all five defendants pleaded not guilty to the charges.

In his Facebook video, Judan dismissed the weapons training allegation as “hearsay,” noting that Siraj Ibn Wahhaj was legally licensed to carry firearms in “36 states.”

“All you hear in the media is that they were heavily armed,” he said, adding, “Everybody’s armed in New Mexico. New Mexico is an open-carry state.”

The wife of Siraj Ibn Wahhaj, Hakima Ramzi, filed for divorce on Dec. 20 in Clayton County Superior Court. In the petition, she said the couple had been married since October 2004 but was now separated.

Two days before the divorce filing, which also included an emergency motion for custody, the Clayton County Police Department in Georgia issued a news release regarding the couple’s 3-year-old son, Abdul-Ghani Wahhaj, who was identified as a missing/endangered juvenile.

In the release, the police said that officers responded to a call from the In-Town Suites in Jonesboro, Georgia, regarding a missing child. The officers met with Ramzi, who told them that she had not seen the boy since Dec. 1, when he left with Siraj Ibn Wahhaj to go to a park.

According to the news release, the mother told the police that her 22-pound son had seizures, cognitive problems and was unable to walk because he had brain damage at birth.

The document stated that a Clayton County judge had issued a “pickup order” for the boy and that his name had been placed in the databases of the Georgia Crime Information Center and National Crime Information Center as a missing person. The police said that the child and his father had last been seen on Dec. 13 in Chilton County, Alabama, where they were involved in a car accident on Interstate 65.

“At the time of the accident, Abdul and Siraj were in the company of seven others who were traveling with them (5 children & 2 adults),” the release said.

In a separate document, an Alabama police officer said that the vehicle rolled over and was totaled. It said Siraj Ibn Wahhaj was in possession of five firearms — two rifles and three handguns — at the time of the accident. A female adult and six of the juveniles were transported to a hospital.

The Clayton County news release said police were told that the group was traveling to New Mexico for a camping trip. But the authorities in Alabama apparently were unaware of the search for the little boy in Georgia. “By the time the authorities in Alabama were aware of the missing person’s report in Georgia, all six children and the adult had checked themselves out of the hospital,” Ramzi’s divorce petition said.

The police news release in December said that no criminal charges were pending against Siraj Ibn Wahhaj. “The concern is for the well-being of Abdul-Ghani Wahhaj’s health.”