DENVER — The Florida Fish and Wildlife Conservation Commission is investigating whether or not Denver Broncos linebacker Von Miller violated any rules on a recent Florida fishing trip. 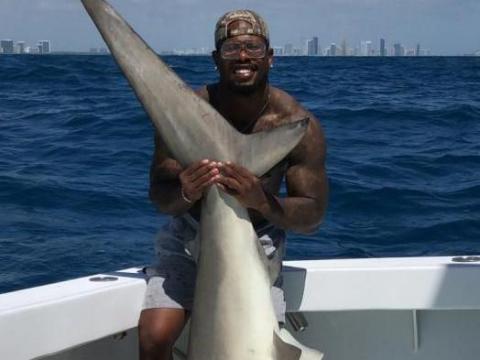 The probe comes after complaints from the People for the Ethical Treatment of Animals (PETA) made to the FWC about the fishing trip, according to TMZ Sports.

“Seeing Von Miller smile as he holds a shark’s bloody body should turn any kind person’s stomach,” PETA official Stephanie Bell told Newsweek in a statement. “This man has a reported history of bullying animals — having previously made the news for wrestling an alligator and PETA is inquiring with officials to ensure that Miller is held accountable if killing this animal was, as we suspect, illegal.”

On the guided fishing trip to Florida, Miller and friends caught a hammerhead shark and reportedly released it back into the ocean after posing for a picture and video.

But according to TMZ Sports, PETA says it suspects Miller and co. illegally killed the animal. Florida wildlife officials say they are looking into the allegations but said they could not comment further.

"The FWC has received the images and video and is looking into whether or not a violation occurred in this incident," said Carol Lyn Parrish, a FWC spokesperson, in a statement to a Denver television station.

She said the FWC has shark guidelines that anglers are encouraged to follow. Harvesting a "Group 3" shark in Florida waters is a second-degree misdemeanor.

Miller often posts photos of his outdoor adventures on social media and has a show on Facebook that highlights some of his travels.