Brokers Who Go Big With Their Closing Gifts 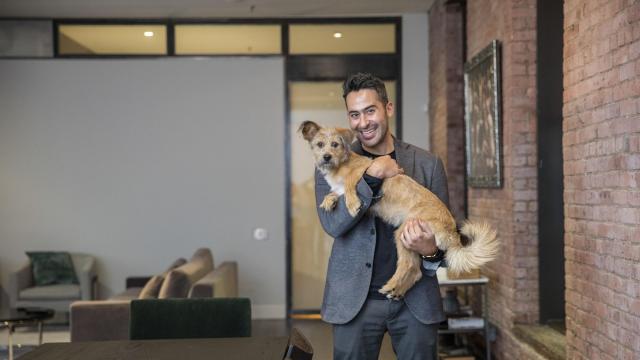 NEW YORK — Last spring, when J.J. Hill finally closed on his dream apartment — a light-filled loft in Tribeca — the only thing missing was someone (or something) with whom to share it.

“Weekdays can be lonely for a single guy,” said Hill, a workers’ compensation lawyer. “You want somebody to come home to at the end of a long day.”

Hill knew adopting a dog made the most sense, but finding the right one with such little free time seemed daunting.

Luckily, Hill had grown close with his broker, Jason Walker, an agent at Douglas Elliman Real Estate, who coincidentally is an ardent animal supporter. Walker has made a habit of rescuing dogs and occasionally gives them to select clients as closing gifts.

Nearly one month after closing, Walker surprised Hill with Taylor, a mixed-breed female dog he had rescued from China and brought back to New York City, along with a full year of canine day care in the neighborhood.

For Walker, a good closing gift is one that shows his appreciation while also helping a greater cause.

In the last year alone, he has helped rescue nearly 50 dogs from the Lychee and Dog Meat Festival in Yulin, Guangxi, China. He flies to China four times a year to retrieve homeless dogs and works with shelters to find homes for them. Of those dogs, Walker has given four to clients as closing gifts.

“On top of finding a client a great place to live,” Walker said, “I also secure a forever home for an animal in need.”

Most brokers see closing gifts as part of the cost of doing business — a way to thank clients for using their services to buy or sell a home.

“Closing gifts are a lovely gesture,” said Pamela Liebman, the president and chief executive of the Corcoran Group. “It’s a thoughtful way to say thanks and memorialize an often daunting process.”

A more typical gift is a bottle of wine or champagne, something celebratory to send clients on their way. But for brokers who may have worked with clients for months, a bottle of wine may seem too impersonal. Stepping up their game and giving something that makes a more lasting impression might bring clients back for future transactions or help with referrals for business.

What a closing gift doesn’t do, however, Liebman said, is make up for poor service or a subpar real estate agent. “If an agent hasn’t done a good job along the way, an over-the-top closing gift won’t rectify a client’s negative experience,” she said. “Successful closing gifts are ones that commemorate a positive transaction and growing relationship.”

Some brokers give gifts that are both practical and self-promotional. Brian Babst from the Novo-Babst Team at Corcoran likes to give out credit-card-size phone chargers, engraved with his name and contact information. And Jason Burke, an agent at Citi Habitats, commissioned a graphic designer to create an animated emoji of his face and then had the image printed onto canvas tote bags. His social media tagline, “For the best apartments #CallJB,” was also included. “The clients really love them,” Burke said, “It’s a purposeful reminder of why they hired me.”

Other brokers aim for creative gift giving that is highly personalized. In addition to Taylor, the rescue dog that arrived for Hill, we came across closing gifts that included donations to a favored cause, design items for the home, even custom-made bobbleheads. Jannette Patterson, a Corcoran broker, had bonded with her client Jane Velez-Mitchell, a television journalist, over a shared love of veganism and animal rights activism. So she gave Velez-Mitchell a gift from the Woodstock Farm Sanctuary.

The same day that Velez-Mitchell closed on a condominium at the Parc Vendome on West 56th Street, Patterson signed up to sponsor Rebecca — a Cornish Cross chicken that the sanctuary had saved from a meat factory farm — in Velez-Mitchell’s name. For Patterson, the sponsorship, which for a flat rate of $150 helps cover food, shelter and care costs for the rest of Rebecca’s life, was symbolic of the personal relationship she had forged with her animal-loving client.

“When you’re helping someone through the real estate process you become very close,” Patterson said. “For me, a closing gift should symbolize the bond you’ve made with your client.”

Velez-Mitchell, who has made regular trips to the farm to visit the animals even before the sponsorship, was deeply touched by the gesture. “It’s a wonderful feeling to be able to do business with someone and still make the world a better place,” she said.

Of course, getting to know a client really well improves the chances of giving a truly meaningful gift. When Jonah Katz, a Corcoran agent, was done helping Andrea Sessler close on a Junior Four apartment in the Gramercy area, he knew exactly what to get her.

Having learned that Sessler was a devoted Peanuts fan and proud collector of all things Snoopy, Katz reached out to the Peabody Fine Art Gallery and got an original print of the cartoon pooch by Tom Everhart. Everhart was the only artist whom Charles M. Schulz, the Peanuts creator, had authorized to paint his characters after his death, making an authentic print quite the collectible for any Snoopy lover.

“A closing gift is a very personal thing,” Katz said. “It should be every bit as unique, thoughtful and original as the person you are giving it to.”

Sessler said: “It meant the world to me. A month after I moved in he had the print framed, matted and hand-delivered to my door.” Ryan Serhant of the Serhant Team at Nest Seekers had a similar idea for a client, more specifically for her 9-year-old daughter. After his international buyers closed on a $17 million condo on the Upper East Side — near the private school their daughter would attend — he wanted to think outside the box for a fitting gift.

Serhant called on a local craftsman to build a dollhouse, 4 1/2 feet tall, for his client’s daughter. The four-level tiny home cost more than $2,000 and came with a rooftop deck, modern furnishings and a bubblegum-pink exterior.

Naturally, a closing gift can have a sense of humor, too. Brian Morgan, an agent with Citi Habitats and a longtime collector of sports paraphernalia, likes to order custom-made bobbleheads designed to resemble his clients.

“Closing gifts are a way to give thanks to your clients for choosing you from the thousands of other real estate agents in the city,” Morgan said. “You want to leave a good impression.”

For one such bobblehead recipient, Michael Bordi — who hired Morgan to help sell his Upper East Side condo last year — the gift wasn’t just amusing, it seemed heartfelt.

Having just learned he had cancer after selling his condo from out of state, Bordi was delighted when he and his family opened a package from Morgan to find three bobbleheads in their likeness.

“The head had actually fallen off of the one of my wife,” Bordi said of the bobblehead set, which he promptly fixed and now displays proudly in his Virginia office. “It was a lighthearted gift that warmed an otherwise tumultuous time for me and my family.”

For some agents, gifting an experience is more valuable than anything tangible. After closing on a multifamily property in Bushwick, Brooklyn, for his client Kevin Chang this year, Christophe Tedjasukmana, a Citi Habitats agent, decided to get creative.

Instead of buying a cliché bottle of wine, Tedjasukmana offered to help throw a housewarming party for Chang, which included the costs of catering, alcohol and servers for more than 80 guests (totaling more than $1,000) as a closing gift.

“I wanted my client to be able to focus on having fun,” Tedjasukmana said, “while showing off the home I helped him find.”

The gesture left quite an impression on Chang, who considers Tedjasukmana a “treasured friend.”

“He stayed behind to clean,” Chang said. “Talk about a broker who really goes above and beyond for his clients.”