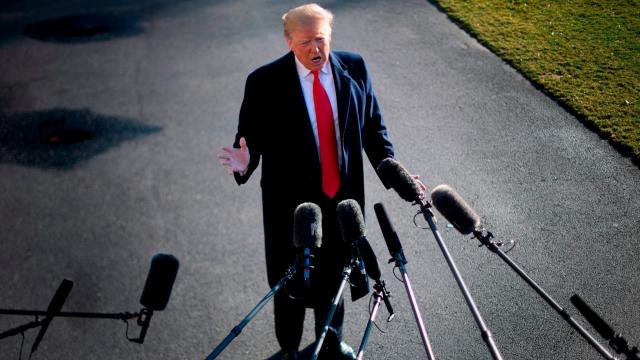 NBC, ABC, CBS, PBS and Fox broadcast network all said on Monday that they had agreed to the White House's request for air time. CNN, Fox News and MSNBC will all carry the address live, as well.

Following news that the networks would air Trump's immigration address, House Speaker Nancy Pelosi and Senate Minority Leader Chuck Schumer said in a joint statement that they should be given an equal amount of time to respond.*

"Now that the television networks have decided to air the President's address, which if his past statements are any indication will be full of malice and misinformation, Democrats must immediately be given equal airtime," Pelosi and Schumer said.

Presidents have been using Oval Office addresses to make big announcements for decades. But this is Trump's first time using the setting for an address to the nation. On Monday the White House requested air time for the speech, as is customary in the relationship between a president and the press.

But for a few hours, it was unclear what the networks would do.

Trump announced his plan for the 9 p.m. ET Tuesday address via Twitter. In his tweet, he characterized the situation on the border as a "national security crisis," a description that even some people in his own party reject.

In response, a broadcast network executive said "time has been requested for 9 p.m. Networks are deliberating."

The broadcasters have been known to resist presidential requests for air time for a variety of reasons, including the perceived urgency of the subject and the popularity of the shows that would be interrupted.

With Trump, there were other factors to consider, including his record of deception and his tendency to ramble off script in long speeches.

Many Trump critics posted messages on social media urging the networks not to air an address that could be filled with falsehoods. Some said that a prominent Democrat should be given equal time. It is unclear if any sort of Democratic rebuttal is in the works.

With all that in mind, network newsrooms were abuzz with speculation about what the broadcasters would decide, since it was sure to be controversial either way.

CBS was the first of the broadcasters to say it would go ahead and carry the address. Then NBC, ABC, Fox broadcast network and PBS said the same.

There is precedent for broadcast networks declining to air a presidential speech. In 2014, ABC, NBC, and CBS declined to carry an address delivered by President Barack Obama on immigration, though Obama's White House never formally requested time after it was determined networks would be reluctant to agree to broadcast it.

Trump's Monday request for networks to air his speech touched on a number of debates that have been raging in journalism since his ascension to the Oval Office. Among them: Should his fact-free speeches be aired live? What kind of fact-checking methods should networks employ?

There has been a recent debate in journalism circles about whether networks should air Trump's words in real-time. Several media critics, for instance, told CNN last week that networks should not rush to air Trump's remarks made during pool sprays and briefings, given how much misinformation he spreads.

"Some advice -- demand to see the text in advance and if it is not truthful either don't air it or fact check it live on lower third," tweeted Joe Lockhart, the former White House press secretary under President Bill Clinton. "And cut away if he goes off text and starts lying."