British family 'traumatized' after US border detainment, but officials say they were trying to enter undetected 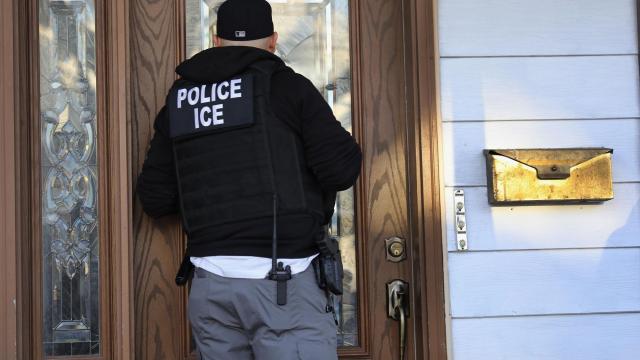 CNN — A British family has filed a complaint with the Department of Homeland Security over their detention by US immigration authorities, after saying they accidentally crossed the US border while vacationing in Canada, an account that has been strongly disputed by US officials.

The family of seven, which includes a three-month-old baby, were detained earlier this month. They said that they ended up in the US after taking a wrong turn from British Columbia into Washington.

A senior US Customs and Border Protection (CBP) official, however, told CNN that by all appearances on the ground, the family was trying to get into the US undetected.

In the complaint, the family said they have been "traumatized" by the experience. In a sworn statement, the family described the baby being forced to sleep on a "filthy concrete floor" in "frigid temperatures" during their first night in custody.

The family said they crossed the border on October 3, after making a "very brief detour on an unmarked road to avoid an animal on the road" that landed them in the United States.

Immigration officials tell a different version of the story. CBP released a statement on Tuesday evening further explaining the incident:

"A vehicle was observed via remote video surveillance system turning west onto Avenue 0 in British Columbia, Canada, at approximately 9 p.m., Oct. 2. The vehicle then turned south and entered the U.S. illegally, by slowly and deliberately driving through a ditch onto Boundary Road in Blaine, Washington. The vehicle traveled west on Boundary Road continuing on the United States' side, and was pulled over by a Border Patrol agent a short time later. The seven occupants of the vehicle, who are citizens of the United Kingdom, were arrested at approximately 9:13 p.m., in accordance with law as established by the Immigration and Nationality Act for illegally entering the United States without inspection."

The CBP senior official told CNN that the group had $16,000 in cash on them when they were arrested.

The group comprised of seven British citizens: two adults and their two-year-old twin daughters, and two related adults and their three-month-old baby boy. They were detained in Lynden, Washington, according to Aldea, The People's Justice Center that is working with the family.

According to a statement provided to CNN affiliate WFMZ by Aldea, the group was traveling close to the border between Canada and the US.

"We made a very brief detour on an unmarked road to avoid an animal on the road. Soon, there was a police car behind our vehicle, flashing their lights and urging us to pull over," the family statement read.

The family said they were detained after being told they had "crossed an international border." They added they had not intended to cross the border, and asked if they could simply turn around. According to the statement, the officer said "no."

A UK Foreign Office spokesperson told CNN it was in contact with the family.

"We are providing assistance to a British family after they were taken into custody in the USA and are in close contact with US Immigration and Customs Enforcement," the spokesperson said.

The family is being held at the Berks Family Residential Center in Pennsylvania, according to the ICE. That is one of three family residential centers in the United States.

In a statement, ICE said the center provides "a safe and humane environment for families as they go through the immigration process." It added that it takes "approximately two weeks" to send an individual back to the UK.