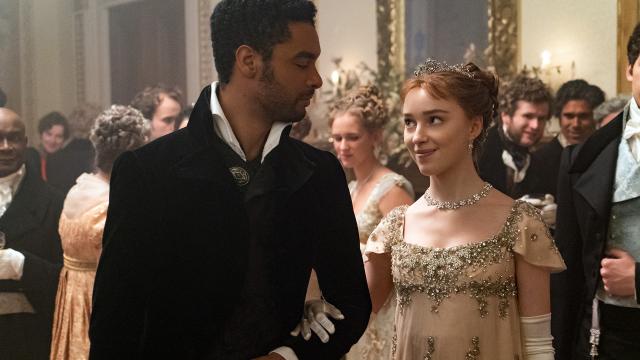 CNN — The new Netflix series "Bridgerton" is hot in more ways than one.

The Shonda Rhimes produced period drama has become the latest bingeworthy show and has set tongues wagging about everything from the diversity of the cast (Britain's Queen Charlotte is Black and played by actress Golda Rosheuvel) to whether there will be a second season.

But the steamy sex scenes have also caught the audience's attention and, according to one of the show's stars, creating them was not as easy as they made it look.

Phoebe Dynevor plays lead Daphne Bridgerton and told Grazia magazine the first scene she shot was a graphic one which an intimacy coordinator helped to plan.

"And it was so great, because it felt safe and fun: you choreograph it like a stunt, or a dance," she said. "It's crazy to me that that hasn't been there in the past. I've done sex scenes before that I can't believe I did: it was only five or six years ago, but it would not be allowed now."

Based on the 2000 novel "The Duke and I" written by romance author Julia Quinn, the series' main plot includes a "will they or won't they" interracial relationship between young Miss Bridgerton and a Duke, Simon Basset, portrayed by British-Zimbabwean actor Regé-Jean Page.

Dynevor said Page was "perfect casting" and had a message for those who think having Black characters in a Regency era series is unrealistic.

"Will Mondrick, the boxer, is based on a real boxer of the time," she said. "And there were lots of rumours -- and lots of historians still say -- that Queen Charlotte was mixed-race. The fact that we haven't seen these stories told before seems insane to me."

And those who are really hoping for more seasons can take heart in the fact that showrunner Chris Van Dusen has plenty of source material to work with as Quinn wrote a series of "Bridgerton" books.