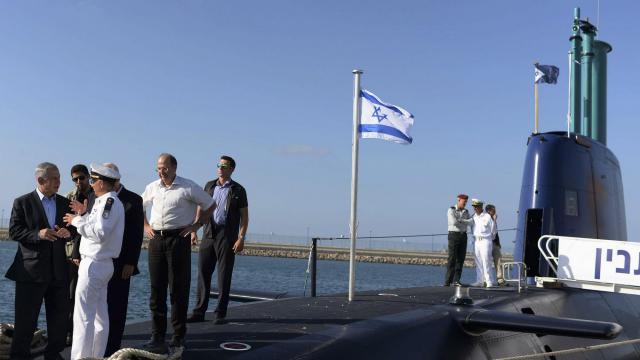 JERUSALEM — Israeli police on Thursday recommended the indictment of one of Prime Minister Benjamin Netanyahu’s closest confidants and three others from his inner circle in a sprawling bribery case involving the multibillion-dollar purchase of submarines and missile boats from Germany.

Netanyahu was not a suspect in the naval-acquisition scandal, which has been called Case 3000, and in fact he was cleared months ago, though he was questioned. The police have recommended criminal bribery, fraud and breach of trust charges against Netanyahu in two other corruption investigations.

The police said they had sufficient evidence to charge David Shimron, Netanyahu’s second cousin as well as his personal lawyer, with bribery and money laundering.

Shimron, they said, had exploited his “status and closeness to the prime minister” to promote the submarine purchase on behalf of Michael Ganor, an Israeli agent working for ThyssenKrupp Marine Systems, the shipyard that builds the vessels. In exchange, Shimron was paid a “reward for success” of nearly $75,000 for “opening doors” and influencing officials in favor of the deal, police said. Ganor turned state’s witness in 2017.

Also accused is David Sharan, who was chief of staff to Netanyahu from late 2014 to 2016. The police said Sharan received about $35,000 from Ganor from 2013, when Sharan was an aide to the minister of finance, until 2016, though the money was paid through other businessmen to conceal the connection.

The police recommended indicting two others from Netanyahu’s inner circle: Avriel Bar-Yosef, a reserve brigadier general and former deputy head of the National Security Council, who was Netanyahu’s nominee to be his national security adviser until the scandal broke; and Eliezer (Modi) Zandberg, who was Netanyahu’s appointee as chairman of Keren Hayesod, an organization that leads fundraising efforts for Israel in dozens of countries.

Bar-Yosef is accused of helping Ganor get hired to represent ThyssenKrupp and then taking a cut of his fees. Zandberg is accused of using his influence to help Ganor with access to officials and inside information in exchange for payoffs of about $27,000.

With elections expected early next year, it is unclear how the police recommendations in the submarine case will affect Netanyahu’s standing. The growing list of people close to the Israeli leader who face possible criminal charges could be used against him by his challengers. But Netanyahu could point to the end of the police inquiry as proof that he personally had nothing to do with improprieties in the submarine acquisition, as he has maintained all along.

Ehud Barak, the former prime minister who has been a vocal critic of Netanyahu’s, wrote on Twitter in Hebrew that the indictments amounted to the “collapse and betrayal of state security.”

“If he knew, he belongs in prison. If he didn’t, he is not qualified to run a state,” Barak wrote, adding: “Treasonous, disgraceful and contemptible.”

Another Netanyahu confidant, Yitzhak Molho, was also caught up in Case 3000: the police said he had met with Ganor about the submarine deal without reporting the meeting. That violated conflict-of-interest rules governing Molho’s dual roles as a top diplomatic emissary for Netanyahu and a partner with Shimron in a leading Israeli law firm. But police said that they had insufficient evidence to charge Molho with a crime.

The police did recommend charges against Shay Brosh, a reserve brigadier general and former head of the elite naval commando unit Shayetet 13, and Maj. Gen. Eliezer Merom, the former commander of Israel’s navy, who police said had received about $160,000 in bribes.