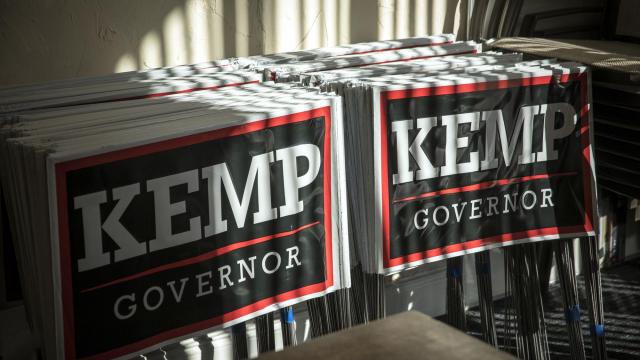 ATLANTA — For weeks, Brian Kemp, the Georgia secretary of state and Republican candidate for governor, has faced accusations that he is trying to suppress the minority vote in his race against Stacey Abrams. And just days ago, a federal judge ruled that the state needed to adjust elements of its “exact match” voting requirement, calling them needlessly burdensome.

Now, in what Democrats said was a desperate attempt to deflect attention just two days before a crucial midterm election, Kemp used his official position Sunday to announce, with scant evidence, that the Democrats were under investigation for allegedly trying to hack the state’s voter registration files.

Democrats immediately denounced the claim as bogus and called it an abuse of power.

The controversy over voting rights, and the basic mechanics of Georgia’s electoral process, has roiled one of the nation’s marquee races. Kemp is locked in a tight contest with Abrams, the Democratic nominee, who would become the first African-American woman to lead any state if she wins. For weeks she has been accusing him of trying to suppress the minority vote and called for him to step aside as secretary of state — something he has declined to do while calling allegations of suppression “a farce.”

Kemp is a staunch supporter of President Donald Trump, and appeared with him at a rally Sunday in Macon. In brief remarks before and during the rally, Kemp made no reference to the investigation. Trump, who has made numerous baseless claims of voter fraud in the past, spoke at length about voting issues, but did not mention the probe.

Concerns about voter suppression, particularly in minority communities, have been raised again and again in states across the country in recent months. A North Dakota law requiring voters to have residential addresses has alarmed residents of Native American reservations, where houses often lack numbers. In Kansas, the one polling place in majority-Hispanic Dodge City, was moved outside the town limits, leading to a lawsuit by the American Civil Liberties Union. And in Texas, a U.S. appeals court upheld a law requiring voters to show ID before they cast a ballot, saying it did not discriminate against African-Americans and Hispanics.

But the controversy over voting rights has been most heated in the Georgia race, especially after The Associated Press reported more than 50,000 voters were stuck in a “pending” status because their registration forms did not precisely match personal information on government databases — under a system that can flag voters simply because of a missing hyphen. Nearly 70 percent of the registrants were African-American, the news agency found.

The initial announcement of the Georgia inquiry did not cite any supporting evidence. Later Sunday, Candice Broce, a spokeswoman for Kemp’s office, said the inquiry was sparked by an email that Kemp’s office had obtained that showed a person named Rachel Small “talking about trying to hack the Secretary of State’s system.” The email was sent to Sara Ghazal, the Democrats’ voter protection director, Broce said.

In the early evening, the state Democratic Party in Georgia released what it said were the email exchanges Broce was referring to. They appeared to be rooted in efforts to find troubling weaknesses in Georgia’s election system.

Critics have raised concerns about the system’s vulnerability after two breaches in recent years that exposed the data of millions of voters, and Democrats have pointed to such breaches as proof of what they call Kemp’s “incompetence” as secretary of state.

In the first email, a man named Richard Wright, who Democrats say is not affiliated with the party, writes to Small, who officials identified as a Democratic Party volunteer.

In the email, Wright describes how “any file on the system” on a Georgia voter information page can be accessed through a place on the site meant for downloading sample ballots and poll cards. He also shows how an online voter registration site can be used to “download anyones [sic] data.”

The Democratic Party statement says Small forwarded that email to Ghazal. The party said it was “abundantly clear” that Small did not attempt to manipulate the site.

“The Kemp campaign has no case and must immediately retract their defamatory accusations,” the Democratic statement said.

Ryan Mahoney, Kemp’s campaign spokesman, said in a statement late Sunday that the effort to “expose vulnerabilities” in the voter system was an “act of desperation” by Democrats.

“This was a 4th quarter Hail Mary pass that was intercepted in the end zone,” he said. “Thanks to the systems and protocols established by Secretary of State Brian Kemp, no personal information was breached. These power-hungry radicals should be held accountable for their criminal behavior.” Voting rights and suppression are particularly combustible issues in Georgia, a Deep South state with a long history of denying the franchise to people of color; its voting procedures and laws have been subject to numerous legal challenges and formal complaints leading up to Election Day. Abrams and Georgia Democrats have assailed Kemp, whom opponents have portrayed as a “master of voter suppression” because of purges of voter rolls and additional limits on voting.

As recently as Friday, a judge sided with critics of Kemp in one case, stating that the procedures for verifying the eligibility of voters whose citizenship was in question was “creating confusion as Election Day looms.”

Concerns about the integrity of the voting system are rampant. A poll, released last week and commissioned by The Atlanta Journal-Constitution and WSB-TV, said 44 percent of respondents believed it was likely or very likely that someone would attempt to tamper with Georgia’s voting system. The survey had a margin of error of 3 percentage points.

The secretary of state’s investigation is also likely to further inflame the rancorous national debate over Republicans’ allegations of electoral fraud — many of which have proved to be baseless — and whether those claims are being used to unfairly harm the Democrats’ electoral chances.

Kemp, who is white, has served as secretary of state since 2010. His office has overseen legal purges of more than 2 million inactive voters from the rolls since 2012 and stalled more than 50,000 applications filed by voters, most of them black. But he has vehemently denied charges of suppression and said he had “made it easier to vote and harder to cheat in our state,” noting that Georgia has added 1 million voters to the rolls since he took office.

Kemp’s office said in a statement Sunday that it had opened its inquiry “after receiving information from our legal team about failed efforts to breach the online voter registration and My Voter Page.” The office said it had formally requested the assistance of the FBI, and state officials were “working with our private-sector vendors and investigators to review data logs.”

Kevin Rowson, a spokesman in the FBI’s Atlanta field office, said the bureau had no comment. When the FBI receives referrals, agents decide whether to proceed with an investigation. The bureau does not comment on the existence of investigations, and it has traditionally avoided taking public actions that would affect elections. The announcement by the secretary of state’s office was a distinctly odd one. Usually investigations begin by determining if there was a cyber intrusion or an action taken by an attacker to bring down networks or wipe out information, or whether data was changed or stolen. Only then would investigators turn to gathering forensic evidence on who might have conducted an attack — a foreign government, a political rival, maybe a group of teenagers.

Kemp has made similar accusations of vote hacking in the past. In December 2016, he accused the Department of Homeland Security of hacking into Georgia’s voter registration records, as well as the Georgia secretary of state’s computer systems. An independent investigation by the department’s inspector general, which operates independently from the department’s chain of command, found that the activity Kemp believed was suspicious was, in fact, normal behavior between computer systems.

Voter registration records, which are kept on a state-by-state basis, are an alluring target for hackers. The records provide details on voters, yet are often kept in insecure databases or computers with outdated systems. During the 2016 presidential elections, Russian state actors probed the voting registration records of at least 20 states, according to the Department of Homeland Security.

Some Democratic voters, like Dawson Zimmerman, a 28-year-old high school teacher, said Sunday that they questioned the timing of the announcement.

“I think, given the documented attempts at voting purges from the standpoint of Kemp, I can’t help but be skeptical about the timing and lack of evidence provided at this time,” Zimmerman said.

As people began gathering Sunday afternoon for Trump’s rally, several supporters of the Republican ticket in Georgia said they had heard about the allegations against the Democratic Party.

Although there were scattered doubts about whether the election would be fair, some voters expressed confidence in the security of Tuesday’s balloting. Shawn McClellan, who was resting against a barricade and wearing a red-and-white “USA” shirt, said he believed the swirl of allegations about the election would sort themselves out.

“The integrity of the political system takes care of itself,” said McClellan, a teacher from suburban Atlanta. “I think it’s good that there are challenges on both sides — it keeps them on their toes.”

He expected complaints by Wednesday morning, no matter the outcome in the governor’s race.

“One side or the other, whoever loses, they’re going to squawk,” he said.