Brexit Could Leave Wedding Bouquets Stuck at the Border 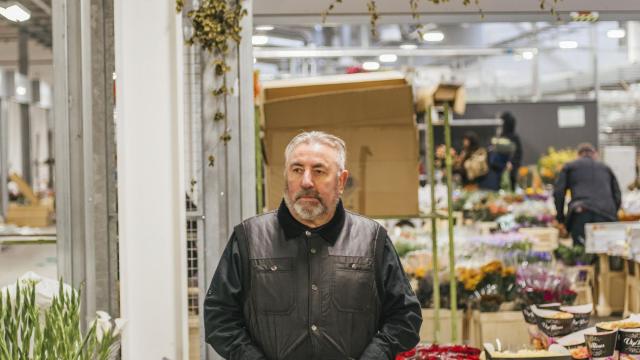 Far removed from the political posturing and brinkmanship that capture most of the attention in Britain’s long and tedious departure from the European Union, Yme Pasma is deeply enmeshed in the mother of all logistical problems.

He is the chief operating officer of Royal FloraHolland, a marketplace where some 12 billion flowers and plants are sold a year — more than one-third of the worldwide trade in such blooms.

Inside hulking warehouses near Amsterdam’s Schiphol airport in the town of Aalsmeer, Royal FloraHolland operates a flower auction and a distribution center. A fleet of computer-guided forklifts whisks buckets of roses, boxes of amaryllis and other foliage — some grown in Holland, some flown in from Africa, Asia and Latin America — toward loading docks, to be placed on trucks and shipped to customers worldwide. The scent of flowers is pervasive, a weirdly anomalous whiff of perfume amid the clatter of machinery.

Nearly $1 billion worth of this product a year is destined for the United Kingdom, a realm that today is still part of the European Union. Flowers arriving from outside Europe can clear customs and then proceed unhindered to Britain.

But as of next March, when Britain is supposed to bid adieu in a process known as Brexit, the Netherlands and the United Kingdom are set to become separate markets, divided by a newly important border.

Unless the two bickering parties in this messy divorce reach an agreement bringing about some less disruptive arrangement, goods traveling across the channel are likely to confront customs checks and sanitary inspections. Flowers now shipped duty-free may encounter tariffs.

“At both sides, the governments are very willing to prepare, but still you need hundreds of people, and you need to train them, and you need warehouses to do the checks, and you have to build the computer systems,” Pasma said. “There are going to be major traffic jams in the Netherlands. If it happens tomorrow, it’s going to be a huge problem.”

Women — overwhelmingly women — work in greenhouses near Lake Naivasha, northwest of Nairobi. They cut roses and place them into buckets that are trucked to the Nairobi airport, where jets ship them out to destinations across Europe and the Middle East.

An increasing flow of these roses travels directly to Britain, bypassing the traditional hub in the Netherlands. Even then, Brexit still presents a significant variable.

The European Union has a trade agreement with Kenya that enables imports of flowers free of tariffs. After Brexit, Britain will have to negotiate its own arrangement with Kenya and other exporters. Until a deal is struck, flowers sent from Kenya to Britain would stand to incur tariffs of nearly 7 percent, a potential shock for an industry that has become a major source of jobs in the East African nation.

But most of the roses grown in Kenya and destined for Britain still travel toward customers on the traditional route that has dominated the flower industry for decades — through the Netherlands.

Buyers May Have to Bypass the Netherlands

Inside a glassed-in room above the warehouse, traders stare at banks of computers as they place bids on this rolling riot of flowers at the auction. Before making their orders, some of the traders walk down to the warehouse to inspect the goods, like gamblers eyeing the racehorses before the bugle.

Behind the main auction floor, 13 so-called clocks — electronic displays of trading activity — track the offers and bids in online exchanges, the participants as far away as China, Russia and the United States.

The whole process depends on a continuous, unimpeded flow of goods through the vast operation. Brexit looms like a giant speed bump. It could prompt merchants to transact directly, outside the marketplace, diminishing the volume of trade at the auctions. Larger players might adapt fine, but smaller growers — who depend on the marketplace — could suffer declining demand.

Pasma is exploring the possibility of separating the flow of flowers into different streams — those that land at Amsterdam and are destined for buyers within Europe, requiring no change to the current system; others that are bound for post-Brexit Britain, and might need to be set aside for new, as-yet-unspecified administrative procedures.

He is hoping he can persuade European and British authorities to institute whatever checks would be required right here, preventing delays.

“You have to get the product across the channel quickly,” he said. A Perfectly Choreographed System May Break Down

On the warehouse floor, forklift operators don headsets and await instructions from the computer in charge. The computer reads chips on every cart that identify the product and the buyer, telling the drivers where to go. The drivers affix their gear to the carts and join the flow of traffic, hewing to lanes demarcated across the floor.

It’s a precision operation. Many flowers have been plucked from cargo jets that have landed within the hour. European customs agents clear the goods on the premises. Ditto, health authorities.

Flowers destined for Britain are either carried by truck through the tunnel underneath the English Channel or dropped at ports in the Netherlands and ferried across the water to England.

Here is where Brexit provokes the most concern.

“This is going to be a huge problem in the infrastructure in our nation,” Pasma said.

The Dutch Flower Group imports some 350 million euros a year (about $400 million) into the United Kingdom, roughly half from the Netherlands. In recent months, the company’s chief financial officer, Harry Brockoff, has met with British and European officials to urge them to maintain the status quo.

If Britain hangs on to European rules, he argues, then flowers crossing the channel should require no additional checks. If they don’t, the British government will need to rebuild the capacity it had before it entered the European Union in 1973, resuming its own customs and so-called phytosanitary checks of the flowers.

Both the British and European governments have signaled designs to streamline health and safety checks to head off post-Brexit problems.

“There is no certainty, so we have to prepare for the worst,” Brockoff said. “But I am hopeful that everybody wants to come to a decent solution.”

‘We’re All Just in the Dark’

Well before dawn, florists across southern England arrive at New Covent Garden Market in London to select their stock. So do designers who create floral arrangements for hotels and offices. So do wedding planners and funeral homes.

The market is the largest wholesale source of flowers in Britain. Roughly 80 percent come from the Netherlands. The original Covent Garden market, in central London, was where Eliza Doolittle worked as a flower seller when she met Henry Higgins in “My Fair Lady.”

These days, merchants at the market view the approach of the official Brexit date with a growing sense of concern.

“I’m dreading that a little bit, that we will have aggravation getting our stuff in,” said Dennis Edwards, owner of one wholesale outlet. He excuses himself to take a call from a florist — Prince Charles’ florist, he notes — who is on the prowl for a special variety of gerbera known as pasta, because it is shaped something like fusilli. In pursuit, Edwards has been on the phone with his agent in the Netherlands, who is monitoring the auctions.

At 69, Edwards is accustomed to this sort of clientele. He procured flowers for Princess Diana’s funeral, and for the memorial ceremony inside St. Paul’s Cathedral after the terrorists attacks of 9/11.

From where he stands — in the midst of roses of every conceivable tint — Brexit amounts to a historical step backward.

“I’m old enough to remember how it was before,” he said, meaning when British customs would inspect shipments arriving at the English port of Dover from the Dutch shipping hub at Rotterdam.

“We’d be waiting for a consignment of orchids from Singapore and they’d find one insect and condemn the whole lot,” he said. He would find himself uttering expensive words to his customers: “Sorry we’ve let you down.”

He frets that Brexit could make these words commonplace again.

“If someone is doing a hotel at five in the morning and the flowers don’t get there until 8, it just messes everything up,” he said. “The Dutch still want to serve us, and we still want to buy their product. But nobody knows what will happen. We’re all just in the dark.” The Local Florist

This is the fear of Mary Woolcot, who owns a flower shop in the London neighborhood of Kennington.

She designs arrangements for weddings and corporate events. She makes early-morning trips to the New Covent Garden Market, where she buys flowers from Edwards, among other suppliers.

The Brexit vote in June 2016 sent the British pound plummeting against the euro, making goods more expensive. That has made customers thriftier, with her sales down by about 15 percent ever since.

“People aren’t buying as much as they used to,” she said.

Many of her corporate customers are in Canary Wharf, a district of old docklands transformed into a global banking center. Brexit has already prompted finance jobs to be shifted to Frankfurt, Germany, Amsterdam and Paris, which translates into less demand for flowers.

But the real threat is political, she said. The Europeans want to teach Britain a lesson for abandoning the bloc. The terms of trade that emerge will not be favorable, she said — not for her business, and not for Britain. Anyone who thinks otherwise is “in cloud cuckoo land,” she said.

Putting on a wedding is challenging enough, she said. She wants the freshest flowers, so she places her orders at the wholesale market no more than one or two days before the ceremony. That leaves little margin for error. If anything goes awry, the consequences can quickly yield a fiasco.

“For a wedding, you only have one crack,” Woolcot said. “It’s got to be perfect.”

Brexit could go a lot of ways yet, but most of them look short of perfect.

“There’s going to be delays,” Woolcot said. “Where are we going to get our stuff?”