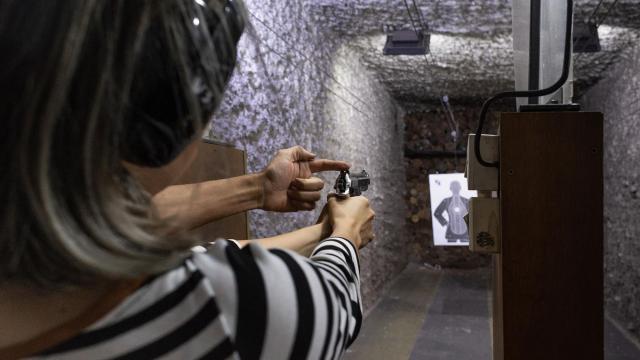 SÃO PAULO, Brazil — For Natalia and Rubens Ortega, the only remaining question is: Glock or Taurus?

The young couple signed up for a gun-training course at a shooting club in São Paulo just days after Jair Bolsonaro, a far-right former army captain, was elected Brazil’s next president on the strength of his promise to upend the status quo and combat crime.

For a population angered by the last few years of political and economic turmoil and worried by escalating violence, Bolsonaro’s vow to break with Brazil’s restrictive attitude toward weapons and make it easier for “good guys” to own guns was particularly resonant.

“We want to get back in practice so we can buy a pistol when it happens,” said Rubens Ortega, who has joined a wave of Brazilians preparing for a widely expected relaxing of gun restrictions. “We just can’t decide which one.”

Bolsonaro’s tough-on-crime stance helped catapult him to the head of a splintered race in a country reeling from a record-level epidemic of violence. Last year there were roughly 175 homicides per day in Brazil, according to the Brazilian Forum on Public Safety. Often simulating gunfire with his fingers at campaign rallies, Bolsonaro said he would combat the homicide epidemic by easing firearm laws and giving the police more freedom to shoot suspects.

“We have to stop this politically correct thing, saying that disarming everyone will make Brazil a better place — it won’t,” Bolsonaro said in his first post-election television interview, pointing out that the strict regulations now in place have failed to stem the flow of firearms into the hands of criminals.

These regulations were created at the turn of the 21st century, when civil society, faced with rising violence and the explosion of the cocaine trade in Brazil, stepped up pressure on the government to register firearms and regulate their use.

Congress responded. A restrictive law known as the Disarmament Statute, approved in 2003, required applicants to be at least 25 years old, have no criminal history, provide proof of a steady job and fixed residence, pass a psychological test and have gun training.

The regulation also gave Brazilians two options: They can get a license for a self-defense firearm, which must be stored exclusively at home or at a place of work; or for a sporting weapon, which can be stored at home and carried to authorized shooting clubs, always with full documentation. In the case of a firearm for self-defense, the applicant must also formally declare why a gun is needed and have that argument approved by the police.

Faced with such an onerous registration process, many gun owners opted to surrender their firearms.

Sales of legal firearms, which also diminished immediately after the Disarmament Statute was introduced, skyrocketed years later. By 2017, there were 42,387 new guns registered with the police, compared with 5,159 in 2004.

Bolsonaro’s promise to ease gun regulation and give the police greater freedom to shoot is worrying some experts who argue that more guns fuel more violence and that police aggression needs to be curbed, not encouraged. Police in Brazil killed 5,144 people in 2017, a 20 percent increase over the year before.

The vast majority of firearms used by criminals were at one time legally acquired — and legal firearms also cause many deaths as a result of accidents, domestic abuse and disagreements that spiral out of control, said Ivan Marques, executive director of the Sou da Paz Institute, which focuses on security issues.

Studies show that having more firearms in circulation increases the number of deaths, but “there are no magic solutions,” said Ilona Szabó, the director of the Igarapé Institute, a research group that focuses on security issues. “We need sustainable measures that make the country safer.”

Despite the enthusiasm for Bolsonaro and anger over the public security crisis, most Brazilians — 55 percent, in a poll conducted by Datafolha right before the elections — think civilian gun ownership should be banned, though this number has gone down from 68 percent in 2013, when the polling firm Datafolha first conducted a survey asking that question. Luciana Burr, a lawyer from São Paulo, says she has been robbed at gunpoint six times. The first time, she was 15 years old. Later, she was held up in a “flash kidnapping” with her 5-year-old son in the car. They were driven around for two hours while armed teenagers forced them to take cash out of ATMs. Still, she staunchly opposes allowing citizens to carry guns, arguing that being armed would not have helped her.

“I was caught by surprise every single time,” she said, adding, “I don’t want some ‘good citizen’ deciding to step in with a gun. I don’t want someone making that decision for me — the risk is too big.”

A number of proposals backed by the “bullet lobby,” a group of lawmakers, have been introduced in Congress in an effort to relax gun restrictions. Within days of Bolsonaro’s victory, representatives keen on impressing the president-elect pushed to vote on a bill, first introduced in 2012, that would lower the age limit for gun ownership to 21 and would not require applicants to prove the need to be armed.

It appears likely they will vote on the bill after Jan. 1, when Bolsonaro and his new allies in Congress take office. Conservatives from his Social Liberal Party won 52 seats, up from eight, making it the second-largest party in the lower house. Stocks in the Brazilian firearm manufacturer Forjas Taurus surged more than 400 percent ahead of the presidential elections on expectations that a Bolsonaro victory would pave the way for a boom in sales, although financial concerns over the company have since eroded some of those gains.

The euphoria surrounding Bolsonaro’s rise in polls also prompted a flood of phone calls to the Centaurus shooting academy from people interested in courses, guidance on how laws could change, or target practice at its two-story house converted into a classroom and four-lane shooting range.

“There has been a big surge in demand thanks to my man, Bolsonaro,” said Nelson de Oliveira Jr., a former police officer who opened the Centaurus shooting academy in São Paulo in 2003, just before Brazil’s then left-wing government introduced the Disarmament Statute.

Among them are the Ortegas, who signed up for gun training at the shooting academy and see the ability to carry a weapon as a deterrent to the kind of armed robbery Natalia Ortega says she suffered two months before Bolsonaro was elected.

“Right now, only the criminals have guns,” she said. “I’m not going to run around the streets with a gun in my hand, but a criminal might think twice if normal citizens could be armed.”