Branzino, a Mediterranean Fish, Is Being Farmed in Connecticut 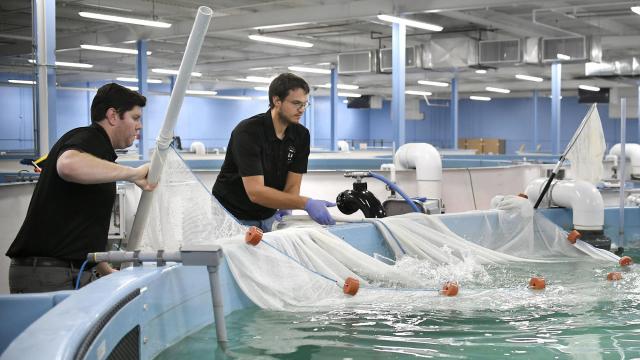 WATERBURY, Conn. — Branzino can be found these days on restaurant menus from Seattle to Atlanta. The flaky, tender, silver-skinned fish — also known as European sea bass, or loup de mer — has become a fixation for chefs and diners.

The reality, though, is that the species’ ocean stock is depleted, and most of the branzino consumed in the United States is farmed in the Mediterranean Sea (where the species is native). Because fish in those farming operations are often enclosed in large cages in the ocean, the concentration of waste can lead to diseases that require treatment with chemicals.

The fish are also flown thousands of miles to American consumers. By the time they reach a kitchen, they have lost much of their freshness and shelf life.

Now, in blue-collar Waterbury, Connecticut, Eric Pedersen, 59, is commercially farming branzino at his company Ideal Fish, in a 63,000-square-foot space at least a half-hour drive from the ocean. And he is attracting interest from grocers and chefs in search of fresher, more sustainable fish.

From 2009 to 2013, Pedersen was a chief executive for two water filtration companies. He came across recirculating aquaculture systems, or RAS, a farming technology in which the fish are kept in closed containment tanks that filter out fish waste so the water can be recycled.

The decades-old method is usually used on a small scale, by hobbyists at home; there are few commercial RAS operations because of the high cost of filtration, Pedersen said.

Two new innovations convinced him that the technology was viable on a commercial scale: an in-tank filter that separates fish waste from water (so no separate filtration system is needed), and a treatment system that removes salt from the waste. This would allow him to extract nutrients from that waste and use them in an aquaponics system to grow produce for sale.

Branzino is his primary focus because it is popular, and commands a high price. And for chefs and grocers, farmed branzino is already a familiar commodity.

The RAS technology also avoids many of the challenges plaguing fish farming in the ocean: The land-based tanks make quality control easier, and allow the filtering of waste. With an investment of more than $10 million from Pentair, a sustainable water technology company, Ideal Fish started in 2013. In September, its branzino arrived in stores in the Northeast.

Ideal Fish’s operation in Waterbury — long known as the Brass City because of its metal-manufacturing history — is spotless, with blue walls accented by large metal outlines of fish.

The branzino arrive as hatchlings from France (though Pedersen and his small team plan eventually to hatch the eggs themselves). The fish spend 12 to 14 months growing to full size in the large tanks, which monitor temperature, oxygen and salinity.

When the fish are fully grown and prepared for delivery, each receives a gill tag with a QR code that allows customers to track their fish’s origins online. Pedersen plans to produce 350,000 pounds of branzino a year, and to begin harvesting and selling sweet basil from his aquaponic system in the next six months. The operation falls under the regulation of several federal, state and local agencies.

Ideal Fish’s branzino is priced slightly above the average for Mediterranean branzino. “We are selling a hell of a story,” said James MacKnight, the company’s marketing and sales director.

Banking on a technology that has not been widely used on a large scale could be a risk. But the early word from the Northeastern grocers Balducci’s and Kings Food Markets — Ideal Fish’s exclusive retail partners through the end of the year — is positive.

In just the first three days that the fish were introduced in those stores, sales were twice as strong as during the best week for branzino last year, said Rick Michener, the director of seafood sales for the two grocers. He was particularly impressed by the long shelf life of the Ideal Fish branzino.

“They gave me five fish in a plastic sack, and I pushed it to the bottom of the fridge,” he said. “A week later, I pulled it out and the fish were still firm, and the eyes were still clear.” Several chefs have also expressed interest. Two seafood-focused chefs — Hari Pulapaka, of Cress in DeLand, Florida, and Nyesha Arrington, of Native in Los Angeles — said a company like Ideal Fish could solve some major problems: inconsistency in the quality and availability of the fish, and the difficulty of finding out where it came from. Arrington currently uses a mixture of farm-raised and wild-caught seafood to ensure she has a steady supply.

“Just tell me where it was caught and the method of catch, and I can decide if I want it,” Pulapaka said. “But distributors sometimes don’t even know that info themselves. The supply chain is not set up to record that information.”

Some people in the seafood business, though, have doubts about Ideal Fish.

“I don’t think it’s that much more sustainable than ocean pens,” said Robert DeMasco, who runs the seafood supplier Pierless Fish in Brooklyn. “When you grow fish in the ocean, what don’t you need? Heat, which is electric, and water.” RAS requires both.

But Pedersen said that his energy costs were not as high as he anticipated, and that he planned to install solar panels and use geothermal energy.

Eric Ripert, the executive chef and an owner of the seafood restaurant Le Bernardin in New York, said he would be most concerned about taste. He recalled visiting a farmed-shrimp operation in Florida: “The shrimp tasted like zucchini,” he said. “When the primary focus is on sustainability, you might forget about flavor.”

But Pedersen said his branzino taste fresher because they are raised locally. Their diet is based on what fish eat in the ocean. “We mimic the wild composition in terms of protein and fat levels and carbohydrates,” he said. Paul Greenberg, the author of “Four Fish: The Future of the Last Wild Food,” said raising branzino was not as sustainable as farming lesser-known local varietals.

“Selling a Mediterranean fish growing in Connecticut, it just doesn’t make much sense,” he said. “Sea trout, Atlantic weakfish — these are beautiful fish that are depleted and hardly on the market. Why not do that?”

Ideal Fish has an aggressive five-year growth plan, including opening more facilities in Waterbury to raise other high-priced species like red snapper and yellowtail, followed by national expansion.

MacKnight, the Ideal Fish marketer, sees his biggest challenge as overcoming negative perceptions of farmed fish by touting the company’s ability to conserve water and grow fresh produce. The company already hosts field trips for schools, and Pedersen is considering a commercial kitchen with cooking classes and demonstrations.

He points to concerns that seafood consumption is outstripping the supply in the ocean as proof that fish farms are becoming a necessity. “We don’t say ‘farmed pork chop’ or ‘farmed rib-eye,’ ” Pedersen said. “There will be a day where all of this will go away and farmed fish will be recognized as the gold standard.”

Companies like his, he said, will make that shift happen. “This is not the only future. But this is the future.”