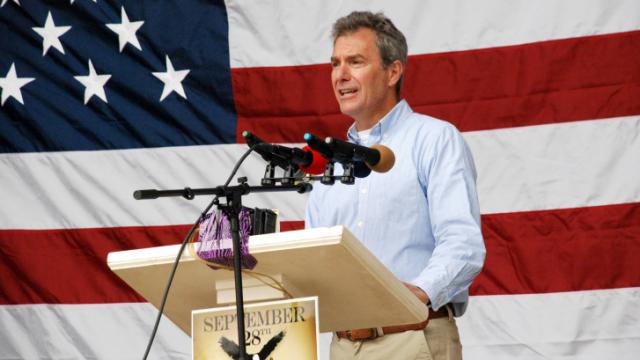 Raleigh, N.C. — The road to the Republican U.S. Senate nomination got rockier for Dr. Greg Brannon Tuesday when a Wake County jury found him liable for misleading investors in a civil securities fraud case.

Although not a criminal verdict, Brannon was found responsible for repaying two investors – one a medical school classmate and the other the husband of a patient in his obstetrics practice – the $250,000 plus interest they lost in a technology start-up. Brannon served on the company's board and actively recruited the two men to invest.

The judgment was especially stinging because Brannon's co-defendant, company co-founder Robert Rice, was found not liable on the same allegations weighed by the same jury.

"It can't have an positive impact for Brannon," said Andrew Taylor, a political science professor at North Carolina State University. "What makes it especially problematic is that the Brannon campaign is based on fiscal policy – issues of fiscal prudence, a steady hand and care of the public purse. This is essentially a verdict that speaks directly to that."

In the wake of the judgment, Brannon vowed he would appeal and said that the trial had not treated him fairly. He also said that the jury's decision would not derail his plans to run for U.S. Senate and that he would officially file the paperwork to get on the ballot later this week. He has already filed papers with the Federal Elections Commission that allow him to raise money and legally conduct a federal campaign.

Tillis is the best funded and most well known of the candidates. Brannon and Harris are his best-funded challengers. Brannon has attracted backing from tea party groups such as FreedomWorks and is popular with "constitutional conservatives," who see controlling federal spending as a top issue. Harris, a former president of the Baptist State Convention of North Carolina, has also portrayed himself as a fiscal conservative but has also played up his credentials as a social conservative. Harris was endorsed Tuesday by the National Organization for Marriage.

"This might help Mark Harris more than anybody else because Harris and Brannon are the two candidates that have the most chance of being able to pass themselves off as the true alternatives to Thom Tillis," Taylor said.

Due to his role in the state legislature and backing from the likes or mainstream conservatives such as Karl Rove, Tillis has been labeled as the "establishment" Republican by many in his party, a term that can be seen as a stamp of approval or term of disparagement, depending on whose wielding it.

The North Carolina primary is May 6. In order to avoid a runoff, candidates must win with at least 40 percent of the vote. If a candidate doesn't hit that 40 percent mark, the second place finisher can call for a runoff. The conventional wisdom is that Tillis is hoping to make that 40 percent threshold, while Harris and Brannon have the best shot at having a good enough showing to force a runoff.

In order to get to that position, candidates will need volunteers and money. Tuesday's judgment could make donors hesitant to give to the Brannon campaign, said Joe Stewart, a former lobbyist and political director who now heads the N.C. Free Enterprise Foundation, a nonprofit that analyzes political races in North Carolina.

"There's only a certain amount of oxygen in the room when you're doing fundraising," Stewart said. "If you're having to explain a verdict and why it shouldn't be a concern, it leaves very little oxygen in the room for the actual, straightforward request for a financial contribution."

Asked if there was any silver-lining for Brannon, Stewart said there is a school of thought that any press for a candidate – particularly one not seen as the front-runner – can be helpful. He pointed out that New Jersey Gov. Chris Christie's polling numbers in the critical presidential primary state of New Hampshire didn't decline after a recent bridge closure scandal.

But, he said, a story that deals with financial mismanagement may strike a chord with voters, particularly with a five-member field where they have other choices. Voters shopping for a "non-Tillis" alternative who may be on the fence, he said, could be pushed into Harris' camp.

"It's the kind of thing that makes voters go, 'OK, next!'" Stewart said.

Neither the Tillis campaign nor the Harris campaign had much to say about Tuesday's judgment.

"We don't have anything to add," said Tillis spokesman Jordan Shaw. "The facts of the case and the finding of the jury speak for themselves."

That doesn't guarantee opponents will completely pass on the issue. Political observers say this kind of judgment is ripe material for campaign ads, particularly if the race gets close.

"Generally, candidates do not want to hand their opponents issues or allegations on a silver platter," said Michael Bitzer, provost and assistant professor of politics at Catawba College. "This seems to be that silver platter just waiting for other Republicans to use to attack him."